SEATTLE — Several studies presented at CROI 2017 explored the link between substance abuse and HIV, with researchers noting opportunities to aim prevention efforts at populations that may be at an emerging risk for infection.

Two studies used national surveillance data to show that addressing prescription opioid abuse could aid efforts to prevent HIV transmission by preventing the transition to injection drug use, whereas another suggested that non-MSM injection methamphetamine users could be an emerging population at risk for HIV and thus potentially good candidates for pre-exposure prophylaxis, or PrEP.

Susan Buchbinder, MD, CROI conference chair and director of Bridge HIV, an HIV prevention research unit at the San Francisco Department of Public Health, said substance use affects the HIV epidemic in multiple ways, including having a direct impact on HIV transmission, such as in the recent epidemic in Indiana that was tied to IV drug use. Indirectly, it may influence patient adherence to medication.

“Substance use is really an integral part of the HIV epidemic,” Buchbinder, who was not connected to any of the studies, said during a news conference here.

‘Were you hooked on painkillers?’

CDC epidemiologist Dita Broz, PhD, MPH, and colleagues used data from the CDC’s 2015 National HIV Behavioral Surveillance System to examine the role prescription opioids play in the trajectory to injection drug use and how it can inform prevention efforts for HIV and other bloodborne infections such as hepatitis C virus. The study was conducted amid a dramatic rise in prescription opioid abuse in the United States since 2000.

People who inject drugs (PWID) were recruited in 16 U.S. cities to assess their experiences with prescription opioid use before their first injection. Broz said participants in the study were directly asked, “Were you hooked on painkillers before you injected for the very first time?” 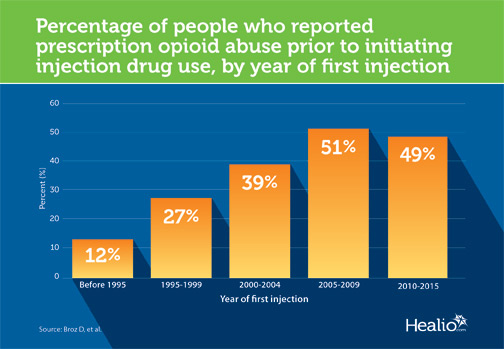 Among 7,454 adult PWID, 30% reported prior prescription opioid abuse, with a substantial increase seen in participants who began injecting during the opioid epidemic. Specifically, the proportion of PWID who reported prior prescription opioid abuse rose from 12% in those who began injecting before 1995 to 49% among those who initiated between 2010 and 2015, according to Broz and colleagues.

“These findings suggest the increasing role of prescription opioids in the trajectory to drug injection among urban persons who inject drugs,” Broz said during the news conference.

She said the average time between first-ever prescription opioid misuse to first drug injection was about 4 to 5 years, suggesting a window of opportunity to prevent HIV infection in this population.

“These efforts could include accessible and affordable substance use disorder treatment, including medication-assisted treatment, and peer-based behavioral interventions to encourage against injection initiation,” Broz said. “Finally, only about half of participants in this study used syringe services programs in the past year, indicating a need to improve coverage of syringe services programs for those who are injecting drugs and to further understand barriers to accessing these comprehensive HIV prevention programs.”

According to CDC epidemiologist Brooke Hoots, PhD, MSPH, the use of methamphetamine, cocaine, and prescription opioid drugs can lead to risky sexual behaviors among men who have sex with men, or MSM, and may result in transition to injection drug use — two factors that can increase the risk for acquiring HIV.

Amid a poor understanding of opioid use among MSM, Hoots and colleagues also used data from the CDC’s National HIV Behavioral Surveillance System to analyze the changes in non-injected prescription opioid use, as well as non-injected methamphetamine and cocaine use, among MSM in 20 U.S. cities in 2008, 2011 and 2014.

Overall, self-reported use of non-injected prescription opioids — painkillers that were not prescribed to the participant by health care providers — did not increase over the study period, with 7.5% reporting use in 2008, 7.7% in 2011, and 7.8% in 2014, Hoots and colleagues reported. Likewise, methamphetamine and cocaine use also was stable over time.

However, there were changes over time in the subgroups, including a significant increase in prescription opioid use among black MSM, with an adjusted prevalence ratio of 1.24 (95% CI, 1.06 to 1.45). The rate of such use was still lowest in this population compared with other races.

Prescription opioid use also increased over the study period in those with less education and low income.

“HIV prevention and interventions need to consider assessing the use of prescription opioids, and not just traditional ‘club drugs,’ among MSM of all races and should also offer early treatment for drug use to reduce HIV risk behaviors,” Hoots said during the news conference.

A third study by Sara Glick, PhD, MPH, of the University of Washington School of Medicine, and colleagues showed a troubling trend at the center of a dramatic increase in injection methamphetamine use in King County, Washington, over the past decade.

In King County, which encompasses Seattle, 35% to 40% of MSM who inject methamphetamines are infected with HIV, whereas HIV prevalence is low among other PWID, according to Glick and colleagues. However, although local signals suggested an increase in injection methamphetamine use in the county, it was unknown if the increase was among MSM or non-MSM men and women and if the networks are connected through the sharing of injection equipment, which could pose a risk for HIV transmission.

Glick and colleagues investigated temporal trends in methamphetamine use among PWID and estimated the frequency and characteristics of injection equipment sharing using data from two series of surveys of PWID in King County, including four surveys from the CDC’s National HIV Behavioral Surveillance System and five biannual surveys of clients at a local syringe exchange program.

Overall, more than 3,000 PWID were surveyed between 2005 and 2015. Glick and colleagues included PWID who reported any sex within the past year and uncovered several key findings.

There was a dramatic increase in methamphetamine injection over the past decade among PWID in King County. Glick said the rate of non-MSM PWID who reported injecting methamphetamine in the syringe exchange survey rose among non-MSM men from 16% in 2009 to 57% in 2015, and among women from 25% in 2009 to 61% in 2015.

The increase among MSM was 76% to 88%. The trends were very similar in both surveys used in this study. Glick said most of the increase in methamphetamine injection among non-MSM participants was attributable to injecting both methamphetamines and heroin together, which is known by the slang term “goofballs.”

Glick and colleagues also saw evidence of injection equipment being shared between MSM and non-MSM men and women who inject methamphetamines.

“These results are concerning because they suggest that non-MSM men and women who inject methamphetamines could be an emerging population at risk for HIV,” Glick said during the news conference. “But it’s very important to note that locally, we have not seen evidence of this in our surveillance data. In fact, the number of new HIV diagnoses among non-MSM PWIDs in King County was only seven in 2015.”

“In King County, we have one of the longest running and most robust syringe exchange programs in the country and that’s a major reason we believe HIV prevalence has remained so low,” she said. “In addition, HIV–uninfected MSM who use meth remain a clear priority population for PrEP and our results suggest that non-MSM people who inject meth and share injection equipment could also be good candidates as well.” – by Gerard Gallagher

The opioid abuse epidemic has led to the increased prevalence of individuals who are resorting to the injection of heroin and other illicit drugs when a point is reached where they no longer are able to access prescription opioids. By understanding the connection between prescription opioid abuse, injection-related harm, and HIV infection, steps can be taken to curtail the growth of all three. It has been noted that prior opioid abuse is significantly higher among individuals who inject drugs and this type of risky behavior or practice can increase the risk of infection. HIV transmission and other infections can develop among individuals who abuse and inject drugs. However, increased understanding of this behavior and barriers that can arise can aid with the management of those who are already injecting. A current goal is to seek to identify opioid abusers and provide intervention to prevent the transition to injection of illicit drugs, and ultimately, the transmission of HIV or other infectious diseases.