SEATTLE — Two novel tuberculosis treatment regimens comprising the same backbone of Sirturo and the experimental pretomanid are showing promise against all forms of the disease, researchers reported here.

Results from two clinical trials presented in late-breaker sessions suggest the regimens are together effective against cases of drug-susceptible, multidrug-resistant (MDR) and even extensively drug-resistant (XDR)-TB, and require shorter treatment courses.

In the open-label, phase 3 Nix-TB trial, Francesca Conradie, MBBCH, from the University of Witwatersrand in Johannesburg, South Africa, and colleagues have so far enrolled 72 patients with XDR-TB or treatment-intolerant MDR-TB. Patients received a combination regimen of Sirturo (bedaquiline, Janssen Therapeutics), pretomanid and Zyvox (linezolid, Pfizer). According to Daniel E. Everitt, MD, vice president and senior medical officer at the TB Alliance, which is supporting the development of both novel regimens, MDR-TB treatment often requires between six and eight drugs for 9 to 18 months or longer, whereas XDR-TB treatment tends to be even more complex and can last up to 2 years or longer. The regimen used in the Nix-TB trial, known as BPaL, does not require injections, and researchers hope to show that a shortened treatment duration of 6 months will provide long term cure.

So far, 40 patients who were treated in hospitals in Johannesburg and Cape Town have completed a 6-month course of therapy with BPaL and cleared TB from their sputum. Thirty-one of these patients completed 6 months of follow-up after dosing, and 24 have culture results. Genome sequencing will determine if one patient had relapsed or became reinfected, and evidence suggests another patient acquired a new infection during follow-up. Nine patients who received BPaL therapy have yet to complete 6 months of follow-up. According to Everitt, there were four deaths early on in the study, but they were not related to drug toxicities.

The next step, Everitt said, is to further evaluate BPaL in patients using varying doses of linezolid to fine tune the regimen. 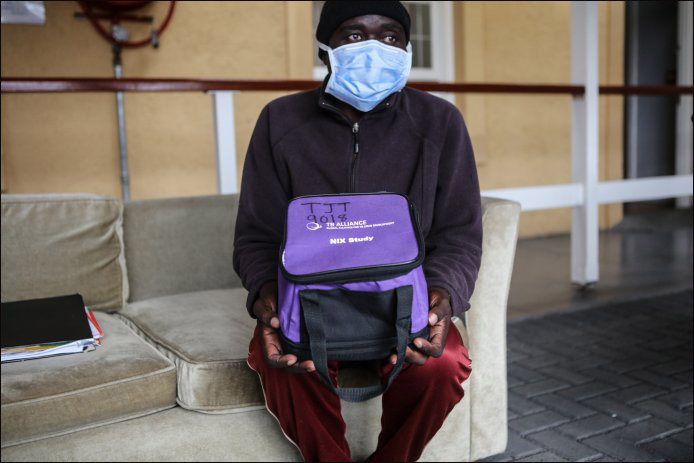 A Nix-TB patient in a waiting area at Brooklyn Chest Hospital in Cape Town.

Researchers also delivered results from the NC-005 trial, a phase 2b, 8-week study of a combination of bedaquiline, pretomanid, moxifloxacin and pyrazinamide (BPaMZ) for patients with drug-susceptible TB and MDR-TB. The trial was conducted at 10 sites across South Africa, Tanzania and Uganda, and included 240 patients — 180 with drug-susceptible TB and 60 with MDR-TB.

“We’re encouraged that we got better, faster culture conversion rates with this regimen compared with standard care, which gives us the hope that we can have a shorter treatment duration,” Everitt told Infectious Disease News.

The researchers also demonstrated that bedaquiline, when given daily for 2 months at 200 mg, was at least as active and safe as the labeled dose, which is given three times per week following 2 weeks of daily dosing, potentially paving the way for a simpler dosing scheme.

The TB Alliance is currently planning the next step in later phase testing of BPaMZ.

Everitt said the findings presented at the Conference on Retroviruses and Opportunistic Infections represent an exciting paradigm shift in TB treatment.

“The two studies combined show that the bedaquiline and pretomanid backbone can treat all types of TB with a relative minimum of drug susceptibly testing, and the hope is that for all categories [of TB disease], it will be a shorter regimen that will provide advantages and ultimately replace standard TB treatment,” he said. – by John Schoen

Disclosure: Everitt is employed by the TB Alliance