Although there have been substantial reductions in malaria-related deaths and morbidity in India in recent years, researchers suggested in a study published in Scientific Reports that broad-scale use of vector control strategies such as insecticides and indoor residual spraying is not enough to eliminate the disease in areas with mosquitoes that exhibit zoophilic behaviors. They suggested that implementing interventions in cattle sheds, where the vectors are often found, may help further reduce malaria transmission in these areas.

“In many parts of the world, the mosquitoes responsible for transmitting malaria are specialist feeders on humans and often rest within human houses,” Matthew B. Thomas, PhD, professor of entomology at Pennsylvania State University, said in a press release. “We found that in an area of India that has a high burden of malaria, most of the mosquitoes that are known to transmit malaria rest in cattle sheds and feed on both cows and humans.”

Thomas and colleagues said that mosquito vectors in India that are responsible for most malaria transmission, including Anopheles culicifacies and Anopheles fluviatilis, are primarily zoophilic, feeding on cattle more frequently than humans. Livestock that are kept near human homes may support disease transmission by attracting mosquitoes to locations where they can encounter people. In some areas of India, cattle sheds are often near and sometimes connected to homes; however, current vector control efforts are limited to domestic dwellings, Jessica L. Waite, postdoctoral scholar in entomology at the Pennsylvania State University, said in the press release.

“Given this cattle-shed ‘refuge’ for mosquitoes, focusing only on humans with regard to malaria control is a bit like treating the tip of an iceberg,” she said.

To better understand the behaviors of zoophilic vectors and their impact on disease transmission, the researchers examined mosquitoes in residences and cattle sheds in six villages in Odisha state, where nearly half of Plasmodium falciparum cases and more than one third of related deaths in India occur. They used molecular techniques to determine the species that rested in each environment and whether they fed on humans, cattle or both. 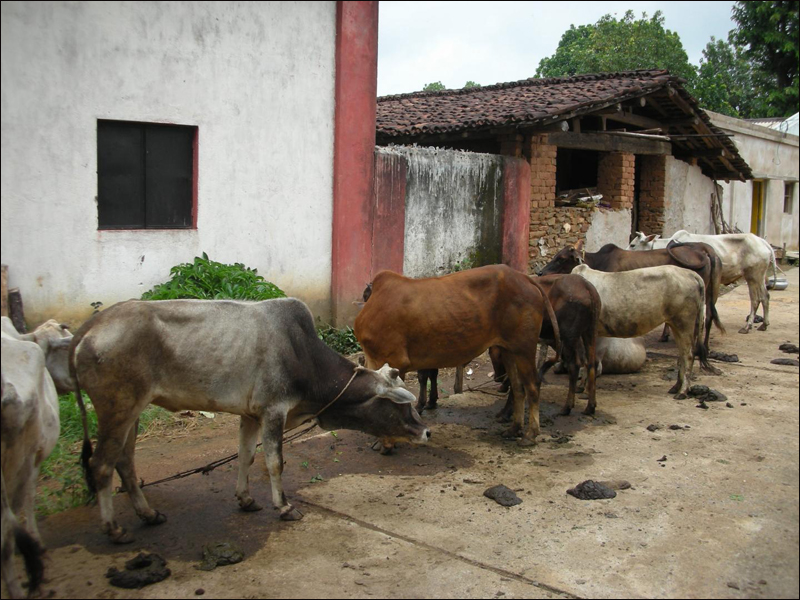 Cattle sheds harboring malaria vectors in India are often near or connected to people's homes, supporting disease transmission in the country.

The researchers constructed a simulation model based on their field data to assess optimal vector control strategies. They found that conventional interventions such as insecticide-treated bed nets and indoor insecticide spraying were less effective when mosquitoes showed zoophilic behaviors. The results indicated, however, that additional control efforts targeting the zoophilic cycle could enhance efficacy.

To further reduce transmission, the researchers suggested treating individual cows with topical or systemic insecticides, or implementing a strategy equivalent to conventional IRS in cattle sheds. They proposed using repellent products in homes and nonrepellent products in cattle sheds to create a "push-pull" effect and avoid driving mosquitoes from one environment to the other, improving overall control.

“We show that directing even modest amounts of effort to specifically increase mosquito mortality associated with zoophilic behavior can shift the balance towards elimination,” Waite said in the press release.

Thomas added that their research may have implications for malaria control in other areas outside of India where zoophilic vectors drive transmission.

“Optimizing use of existing tools will be essential to achieving the ambitious 2030 elimination target set by [WHO], which aims to decrease malaria cases globally by 90% compared to 2015 levels and eliminate malaria in at least 35 countries, by 2030,” he said. – by Stephanie Viguers

This is a really solid paper. In many vector-borne diseases, particularly malaria, the conversation is starting to focus on residual transmission. Part of the issue is that vector control interventions do not always work very well. As this paper shows, the interventions in India are all based indoors, but the mosquitoes are feeding and resting in cattle sheds. Many who work in the field of malaria control recommend that all structures be sprayed; however, India appears to have not sprayed animal sheds. In contrast, in Zimbabwe’s most recent IRS campaigns, all structures are sprayed, and that has had an immense impact on transmission.

As we examine residual transmission, we start to notice the emergence of mosquitoes that have been long considered not very important. In an African context, there are relatively few mosquito species that are usually considered critical to control. As we gain control of them, relatively minor mosquito vectors are starting to emerge as major players. They rest and feed outside of the house, so indoor-based interventions such as nets and residual spraying are not going to work. That is what this paper illustrates. Where I work in Zambia, mosquito vectors rest in goat sheds. It’s almost the same story as this paper, and I imagine that if we modeled it, we would see that targeting interventions to include goat sheds may have a similar impact.