HIV over 3 decades: From fatal disease to chronic condition

To mark our 30th anniversary, Infectious Disease News will be examining some of the infectious diseases that have defined and changed the field over the past 3 decades.

The novel illness that became known as Acquired Immune Deficiency Syndrome was first identified as “a gay disease” — an affliction that would affect only MSM.

“We saw that in society and in individual patients,” Marcus Conant, MD, a dermatologist in practice in San Francisco in 1981, told Infectious Disease News. “Many people thought, ‘This is something that’s only going to happen to gay men; it’s not going to happen to straight people.’”

Within 3 years of the report on Pneumocystis pneumonia, however, additional MMWRs described the first case of AIDS in an infant who received a blood transfusion and the development of AIDS in women who engaged in heterosexual intercourse.

“We certainly were surprised by the HIV epidemic,” Paul A. Volberding, MD, director of the AIDS Research Institute at the University of California, San Francisco, and chief medical editor of Infectious Disease News, said in an interview. “We shouldn’t have been. It wasn’t the first new infectious disease we’ve encountered.”

As of 2015, the most recent year for which statistics were available, approximately 35 million people have died of the disease worldwide. In that time — more than 30 years later — advances in detection, treatment and prevention have led to a shift in which HIV is now considered a chronic, manageable disease in regions where ART is readily accessible. The next stage of progress focuses on a long-awaited vaccine and a cure.

Advances in treatment, perceptions of HIV

The shift in how HIV is viewed on a social level — and the acceptance of the gay community that came with it — is the most important achievement of the HIV epidemic, according to Conant.

“Americans were not ready to accept homosexuality as a fact of life until they were confronted with people they knew who were dying of AIDS,” he told Infectious Disease News. “Gays in the military, gay marriage, the acceptance of gay people — all of that is a consequence of what we went through from about 1981 to 2000.”

However, Volberding ranked the development of highly active ART as the most critical achievement in the fight against HIV.

“I think the most centrally important issue is the development of effective, convenient and nontoxic drugs that really turned the epidemic around,” he said.

In 2015, the Strategic Timing of Antiretroviral Treatment, or START, trial provided conclusive evidence that the immediate initiation of ART in asymptomatic HIV–positive adults with a CD4 cell count of more than 500 cells/mm3 significantly reduced rates of serious AIDS–related and non-AIDS–related events. This shift enabled clinicians to provide therapy to people throughout the world, “even in the poorest settings — not only for effective treatment, but for prevention,” Volberding said.

The HPTN 052 study and the Partners Demonstration Project are two landmark investigations that illustrate the benefits of treatment as prevention as well as pre-exposure prophylaxis, or PrEP. The HPTN 052 trial demonstrated that early ART initiation was associated with a 93% lower risk for HIV-1 transmission among serodiscordant couples, and the Partners Demonstration Project showed that the integration of time-limited PrEP along with ART among high-risk, serodiscordant couples resulted in an HIV incidence of less than 0.5% per year.

The role of lifestyle factors, such as smoking, also impact the prevalence of comorbidities and the aging process in this population. Among patients with HIV who adhere to treatment regimens but smoke cigarettes, smoking reduces life expectancy by about twice as much as HIV. The decrease in life expectancy because of smoking cigarettes was similar to the loss of life from HIV among men with HIV in the U.S., even when accounting for imperfect ART adherence and missed follow-up care.

“It is important to understand how HIV is so much different in someone who is infected now, even at 60 years of age, compared with someone who is 60 but was infected at 30,” Kristine Erlandson, MD, network investigator with theAIDS Clinical Trials Group and assistant professor of medicine at the University of Colorado, said. “The fact that there’s now a big focus on the complications of HIV and aging is something that most patients 30 years ago never would have dreamed would be an issue.”

The physician’s role in managing an epidemic — both as a provider of health care and as an educator — is a key lesson from HIV that can, and should, inform our approach to future epidemics, according to both Conant and Volberding.

“Every epidemic in history, to a greater or lesser extent, follows a well-described pattern. It happened with the Black Death, cholera, smallpox, AIDS and, to some degree, with Ebola,” Conant said. “First, people deny that it’s happening and say that it’s not going to happen to them, and then certain individuals are blamed for the epidemic. Inappropriate legislation is passed that stigmatizes those individuals, and then there is a loss of faith in the institutions that are set up to run society.”

Understanding the pattern that epidemics follow, and using that knowledge to affect change, is a crucial lesson.

“It’s one of those situations where everyone says, ‘Well, someone will take care of this.’ Young physicians have to realize that they are that somebody,” Conant said.

In addition, investing in the public health infrastructure is critical.

“Caring for patients alone won’t stop an epidemic,” Volberding said. “You have to do it in a coordinated way, in a smart way, led by people who understand public health approaches. I think we learned that with HIV. I hope those approaches continue to be remembered for the next epidemic diseases.” 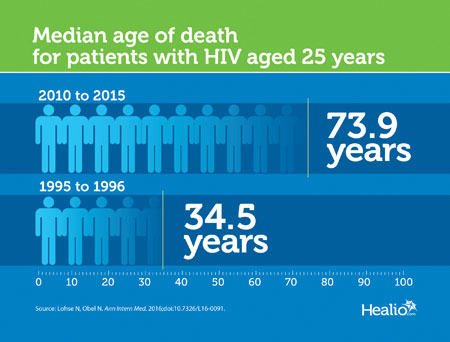 Research regarding a vaccine for HIV, as well as a cure, is ongoing.

“We’re beginning to see some really exciting results with vaccine development, and, interestingly, they’re being developed in the context of therapeutic vaccination as well,” Volberding said. “The research on the cure and on the vaccine are, in many ways, coming into alignment. The science in the field right now, to me, is most exciting.”

In the meantime, testing for HIV and bringing patients into care are effective, important strategies for reducing new infections.

“We need to find out who is infected, get them in care, and keep them in care,” Volberding said. “If we do that, we will make a serious dent in the epidemic.”

However, stigma continues to be “an absolutely giant issue” that negatively impacts all facets of care, including implementation of these strategies, according to Volberding.

“Stigma is what keeps people from being tested and engaging in care,” he said. “In many circumstances, people are undertreated because they’re afraid of being exposed. The ‘Getting to Zero’ movement in San Francisco has three aims: zero deaths from AIDS, zero new infections and zero stigma from AIDS. I commonly comment that I think the first two aims are attainable and the third one isn’t.”

Erlandson said that stigma remains a serious issue, though it has decreased.

“Improvements in stigma have allowed people to come forward to be tested and to ask for PrEP,” she told Infectious Disease News.

The shifts that have occurred in more than 30 years of HIV care — and the lessons learned — continue to influence clinicians and how they approach patient care.

Erlandson learned about the early days of the epidemic through attending physicians during her training, HIV patients who had survived since early in the epidemic, and from the literature. Her research on HIV and aging was made possible through the advances in treatment that enable patients to live near-normal lives, but her knowledge of what patients went through early in the epidemic often leaves her frustrated with younger patients who are nonadherent.

“Patients today have the power to treat HIV, and to prevent it. So many people struggled to get us to this point, whether it be the research participants or the people who died,” Erlandson said. “I think today’s generation of patients with HIV should embrace the advances their predecessors have laid out.”

Conant emphasized the “tremendous” importance of sharing experiences from the early days of the epidemic.

“While there was little we could do in the beginning to save patients’ lives, we could always give patients hope — not hope that they would be cured, but hope that they might not be in pain, that they could come to closure with their parents who had a different view of their lifestyle, that they would see another tomorrow,” he said. “There is always something you can do. You should never feel hopeless, even in the face of something as tragic as an epidemic.” – by Julia Ernst, MS