What has happened to avian influenza in humans?

There are two major serotypes of avian influenza currently causing human disease: influenza A(H5N1) and influenza A(H7N9). H5N1 is highly pathogenic and deadly to poultry. H7N9 does not make the birds sick. While human disease has been caused by other serotypes of avian influenza in recent years, such as H5N6, H6N1, H7N2, H9N2 and H10N8 — almost all in the Far East — these cases have been relatively few. Therefore, this article will be limited to a discussion of H5N1 and H7N9.

H5N1 has been isolated from poultry and wild birds in many countries in Asia, the Middle East, Europe and Africa and is considered endemic in Bangladesh, China, Egypt, India, Indonesia and Vietnam. Human disease has been acquired in 16 countries. There have been five or more cases reported from nine of these countries: Azerbaijan, Bangladesh, Cambodia, China, Egypt, Indonesia, Thailand, Turkey and Vietnam.

While human cases of H5N1 avian influenza seem to have slipped from the news radar screen, the infections continue to occur. As of Oct. 3, there have been 856 cases of H5N1 reported worldwide, according to WHO. Since the H5N1 epidemic started in 2003, there were more cases of H5N1 avian influenza (n = 145) reported in 2015 than in any previous year. The previous peak year was 2006 with 122 cases. There seems to be a lull in 2016 with only 10 cases reported as of Oct. 3. While in the first 3 years of the epidemic all reported cases were from China, Cambodia, Indonesia, Thailand and Vietnam, in the past 2 years the cases have been overwhelmingly from Egypt. In 2014 and 2015 there were 173 cases in Egypt compared with 24 in the rest of the world. Despite H5N1 being thought of as a Far Eastern disease, since 2008 there have been more cases in Egypt than any other country during 6 of the last 7 years. In fact, all 10 cases worldwide in 2016 have been from Egypt so far. Since the onset of the epidemic, there have been more cases reported from Egypt than any other country — 356 out of 856. Indonesia is a distant second with 199 cases reported. The explanation for the surge of cases in Egypt in contrast to the decrease elsewhere is unclear. 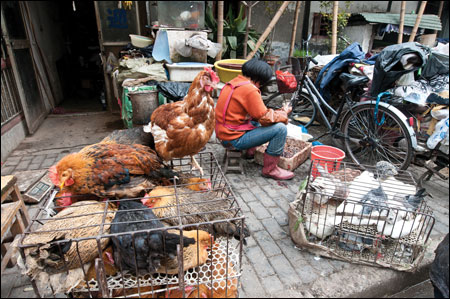 Most of the exposures that have been traced to human cases of influenza A(H7N9) have resulted from contact with live poultry markets, which are common in China.

It is of interest that the reported mortality rate of Egyptian cases has been lower than rates reported elsewhere — 33% vs. 67%. As a result of the increased proportion of cases from Egypt, the worldwide mortality rate of the infection has decreased from more than 60% in 2003-2009 to 44% for 2010-2015. The explanation for the lower mortality rate of H5N1 in Egypt is unknown, but may be related to strain differences of the virus.

Asymptomatic infection or mild disease with H5N1 seems to be unusual. In fact, serological studies in asymptomatic contacts of infected patients and in poultry workers have shown little or no evidence of asymptomatic infection. However, a recent study of poultry workers from Indonesia was reported to show that 84% of workers had antibodies to H5N1 and that 44% had seroconverted over a 2-year period with no symptomatic disease. These results are so different from what had been previously reported that they clearly need to be confirmed.

H5N1 has not changed in terms of the difficulty with which it is acquired from birds and the relative difficulty in transmission from person to person. There has been no sustained person-to-person transmission.

The first human cases of the H7N9 outbreak were observed in China in March 2013. As of Oct. 20, there have been 803 documented cases with 316 deaths reported in less than 4 years. This compares with the 856 cases of H5N1 reported worldwide over 13 years. All of the known cases of H7N9 were exposed in China (including Hong Kong). Unlike H5N1, H7N9 is not highly pathogenic for poultry, making surveillance difficult as the birds do not become sick. Most of the exposures that have been traced to disease in humans have resulted from contact with the live poultry markets that are common in China.

Among proven cases, the mortality rate was about 40%, but this figure is undoubtedly too high, as asymptomatic and mild infections occur. Therefore, logically, the number of reported cases is probably much lower than the actual number of cases. Cases of H7N9 peak in the colder months, October through March. The disease affects mainly an older population, many with underlying diseases. The older patients tend to develop more severe disease and have a higher mortality.

H5N1 has been around for a long time and, to date, has not given rise to mutants capable of easily infecting humans or producing sustained person-to-person transmission. At present, avoidance of sick or dead poultry would go a long way to eliminating the disease in humans.

H7N9 is a relative newcomer, but so far has been restricted to the Far East. It also has not given rise to mutants that are a threat for widespread disease. However, the fact that it can cause mild or asymptomatic disease and can go unrecognized in healthy poultry, without specific testing, makes it more dangerous and unpredictable.

There are vaccines available for poultry for both H5N1 and H7N9. However, it has proven difficult to maintain a high level of immunization. Since H5N1 causes illness and death in poultry, it would be rapidly recognized in commercial flocks, including live markets, leaving backyard poultry as the likely source of human exposures for H5N1. H7N9, which does not cause much illness in poultry, can spread unrecognized in commercial flocks. Even though flocks infected with these viruses are destroyed to eliminate infection, the viruses persist in wild birds only to infect poultry again.