Isolating heater-cooler devices from OR could limit M. chimaera infections

Invasive infections likely caused by the aerosolization of Mycobacterium chimaera from contaminated heater-cooler devices during cardiac surgery have been reported around the world. While the outbreaks have prompted responses from major public health agencies, more guidance is needed, according to researchers.

Rami Sommerstein, MD, junior faculty member in the infectious disease department at Bern University Hospital in Bern, Switzerland, and colleagues recently made recommendations they hope will limit the number of heater-cooler device (HCD)–related M. chimaera infections in the future. These include removing the devices from ORs and other critical care areas to keep patients from being infected by contaminated exhaust air.

Sommerstein told Infectious Disease News that the LivaNova 3T HCDs implicated in the outbreaks were likely already contaminated when they arrived to the hospitals. Water outside the German plant where the HCDs are manufactured was found to harbor M. chimaera, he said.

“There was pretty good evidence that most of the devices were colonized at the factory site,” Sommerstein said.

M. chimaera is a slow-growing species of nontuberculosis mycobacteria commonly found in soil and water, according to the CDC. Although it rarely makes people sick, symptoms of infection can be general and nonspecific and are often delayed, the CDC said.

Indeed, Sommerstein said long intervals between cardiac surgery and the appearance of symptoms meant that many patients who have suffered M. chimaera infections as a result of the contaminated HCDs were commonly misdiagnosed, often with sarcoidosis. The first cases appeared around 2012.

“We should not forget that the disease is quite challenging to diagnose,” Sommerstein said.

HCDs are used with heart-lung machines to regulate body temperature during cardiothoracic surgeries and other medical procedures. The CDC says the devices are used in more than 250,000 procedures in the U.S. every year. The agency estimated that in hospitals where at least one HCD–related infection has been identified, the risk of a patient being infected with M. chimaera was between approximately one in 100 to one in 1,000.

After the FDA linked the devices to infections in 2015, the CDC alerted health departments and providers around the United States and issued interim practical guidance advising facilities to remove contaminated units, maintain those in service and track reports about potential infections.

The CDC also offers guidance on how to notify patients and health care providers about potential infection.

According to Sommerstein and colleagues, because no reliable disinfection procedures exist to eradicate the bacteria from HCDs, separating the devices from the air of critical medical areas is necessary to keep patients safe. 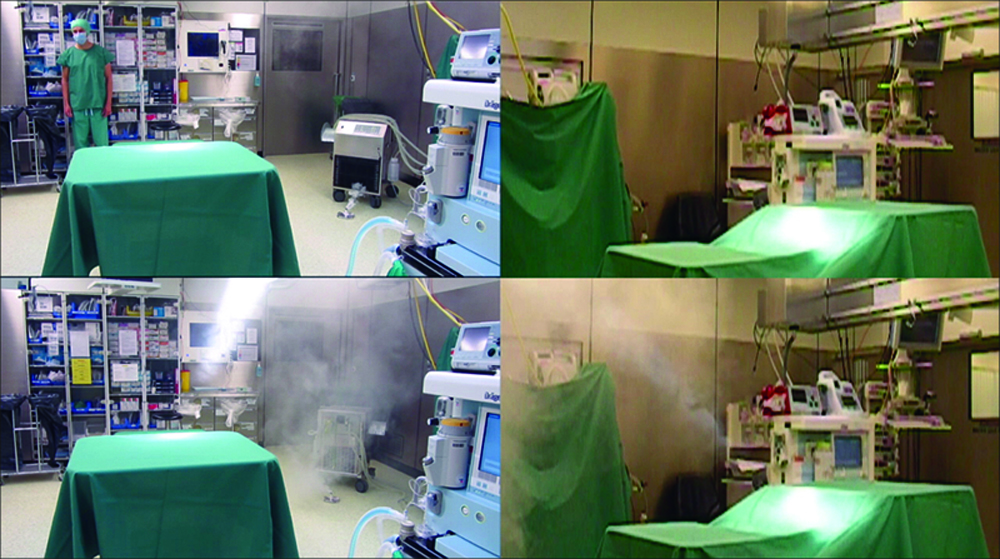 Stills taken from a video show the exhaust from a heater-cooler unit, represented as smoke, as it is directed toward or away from a patient.

“These devices were put up in the OR in a way that they expel air directed toward the patient,” Sommerstein said. “For the cardiac technicians, this is easier to control the device.”

The air is produced when the fan is turned on to cool the HCD. In a previous experiment, Sommerstein and colleagues used smoke to show how this air is carried into the laminar airflow, merging with ultraclean air.

“This is not proof,” he said, “but this is good evidence of airborne infection.”

Sommerstein’s hospital uses a different brand of HCD that is kept in a separate room from the OR with its own ventilation. According to him, this is the best method to limit infection, but it is also impractical for some facilities because of space concerns.

The second-best option is to build a cage or a box around the HCD to separate it from the OR air, he said. But this presents its own set of problems, including dealing with the heat produced by the devices and making the container airtight while also running tubes for the exhaust.

“It’s quite challenging from an engineering side,” Sommerstein said.

In a statement to Infectious Disease News, LivaNova said HCDs play a critical role in making many heart surgeries possible. The company said it is trying to develop a solution to the issue with its 3T devices.

“We are working with regulators, clinicians, and all relevant parties to resolve this important industry-wide issue,” the company said.

Sommerstein acknowledged that replacing LivaNova 3Ts could present financial and logistical problems for health care facilities because the devices cost tens of thousands of dollars and work with popular LivaNova heart-lung machines.