Researchers may have discovered why high rates of West Nile virus infection in birds in the Atlanta area have not translated into a large number of infected people.

Unlike American robins, which efficiently pass West Nile virus to mosquitoes, northern cardinals do not carry enough of the virus to infect the feeding insects, according to Rebecca S. Levine, PhD, epidemic intelligence service officer at the CDC, and colleagues.

“What we found is that, for some unknown reason, around the middle of July, mosquitoes in Atlanta seem to decide that they have had their fill of robins and they switch to feeding on cardinals,” Levine, who conducted the research while at Emory University, said in a news release.

“But cardinals, even though they can be infected with West Nile virus, are much less likely to have enough virus circulating in their blood to transmit the disease back to feeding mosquitoes. This is why we call them ‘supersuppressors.’ ”

Low rate of virus among people

Since being introduced to the United States in 1999, West Nile virus has become the most common zoonotic mosquito-borne pathogen in the country, responsible for more than 780,000 infections and 1,700 deaths, according to Levine and colleagues.

In Georgia, the number of West Nile virus cases in humans has remained comparatively low despite the consistent presence of infection in Culex mosquitoes and local bird populations in Atlanta. According to Levine and colleagues, the state has seen just 330 reported cases of West Nile virus since 2001 (3.3 per 100,000 people) compared with 2,088 in Illinois (16.2 per 100,000 people), where infection rates among mosquitoes and birds in the state’s biggest city, Chicago, are similar to those in Atlanta.

A similar pattern throughout the Southeast stands “is in sharp contrast to some urban areas in the northeastern and midwestern United States,” Levine and colleagues wrote.

Levine and colleagues caught wild birds and Culex mosquitoes at sites around Atlanta in 2010, 2011 and 2012, beginning in either May or June and ending in October or November each year. The “urban micro habitats” where they trapped the birds and mosquitoes included mixed-use parks divided into wooded and water sections, residential areas, patches of old-growth forest, and an area at Zoo Atlanta away from the exhibits. 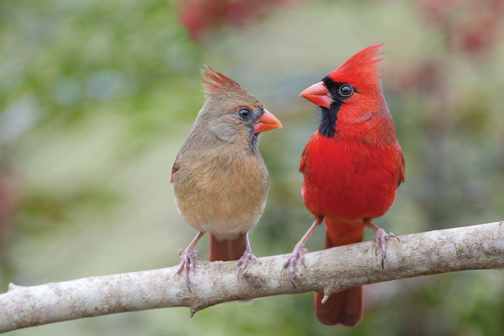 Northern cardinals do not carry enough West Nile virus to reliably infect feeding mosquitoes and may shield Atlanta residents from infection during a critical time of year.

Using nylon mesh mist nets between 6 a.m. and 1:30 p.m. on days with no precipitation and low winds, they captured 630 birds representing 41 species, of which 28.3% tested positive for West Nile virus antibodies. Five species had significantly higher rates of infection than Carolina wrens, which were used as a reference group, including blue jays (71.4%) and northern cardinals (49.4%).

Significantly lower seroprevalence was observed in hatch-year birds and in birds from the old-growth forest.

Levine and colleagues collected 45,890 female Culex mosquitoes, mostly in CDC gravid traps. The mosquitoes were identified only to the genus level because of the difficulty of reliably distinguishing two co-occurring species. In all habitats, the abundance of mosquitoes peaked in July. The highest West Nile virus infection rates occurred in August and September, and the lowest (no infection) in May. Each type of habitat had a near 100% probability of containing infected mosquitoes in August.

Analysis of blood meals in the female mosquitoes showed they fed on birds and mammals.

Among birds, American robins and northern cardinals accounted for 41.4% of all blood meals and were used to examine temporal trends. Among mammals, humans accounted for 94.4% of blood meals, although feeding on humans was low overall and reached a peak in July.

Mosquitoes fed on birds throughout the study period but preferred feeding on robins from May to July, and cardinals from August to October, Levine and colleagues found.

The unexplained switch to feeding on cardinals, a less competent host, coincided with the months of highest infection rates among mosquitoes, providing a natural buffer for humans, according to Levine and colleagues.

“This shift occurred between the months of July and August, precisely before the critical infectious months of August and September in either the host or vector populations, and helps account for both the very high seroprevalence among northern cardinals and well as the low seroprevalence among American robins,” they wrote.

“The temporal feeding patterns on American robins and northern cardinals in Atlanta further explain the reduced occurrence of human epidemics in the area. In conjunction with the waning feeding behavior on humans during the late half of the season, Culex also shift their feeding to a less competent host during this time.

“Although northern cardinals are on average competent enough to sustain viremias at just above the minimum viral titer needed for transmission, they are unlikely to provide infectious viremias sufficient to fuel epizootic transmission, thereby reducing the probability of spillover to humans.” – by Gerard Gallagher