Researchers on a “road trip” in the heart of the Zika outbreak in northeast Brazil are collecting samples on the move to study the spread of the virus and try to foresee its future.

Beginning in Belém in late May and sticking mostly to coastal cities en route to Salvador, the researchers are focusing on the areas with the highest reported rates of microcephaly. Their project includes a minibus lab and a fixed lab in São Paulo.

By utilizing portable USB-powered genome sequencers, the researchers can analyze virus samples in real time and use the data to not only track Zika’s spread, but make better predictions about how it might spread going forward, according to Nick J. Loman, PhD, MBChB, of the Institute of Microbiology and Infection at the University of Birmingham, United Kingdom.

Loman and colleagues are stopping at regional public health laboratories run by the Ministry of Health and helping them to screen hundreds of patient samples for Zika. Those that test positive then can be sequenced rapidly using MinION devices (Oxford Nanopore Technologies) — the same fit-in-your-palm genome sequencers that were used by Loman and colleagues to study the recent Ebola outbreak in West Africa.

“We think this is a very effective way of getting broad coverage of Zika genomic diversity quickly,” Loman told Infectious Disease News.

So far, he and his colleagues have seen promising results.

According to Loman, geneticists have been playing “catch-up” when it comes to obtaining DNA sequences from the Zika outbreak. In a matter of days, however, the team doubled the amount of genomes that have been sequenced. 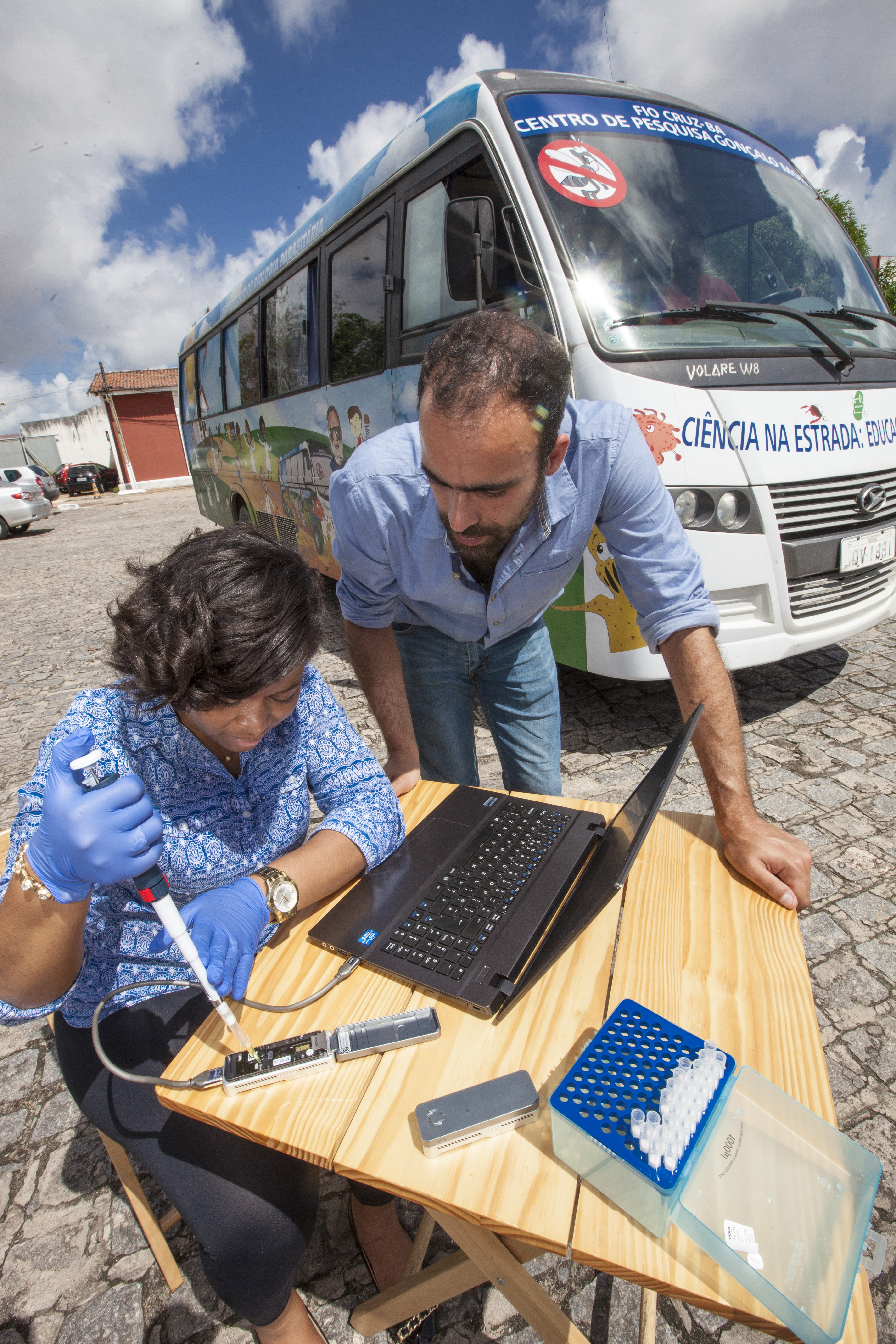 Figure 1. Jaqueline Goes de Jesus, from the Oswaldo Cruz Foundation in Salvador, and Nuno Faria, from the University of Oxford, use a MinION sequencing device in front of a minibus equipped with a lab in João Pessoa, Brazil.

“We have sequenced 24 genomes in 4 working days,” Loman said. “Although we’re still getting to grips with the protocol and analysis at this moment, 24 is the same as the total number of Brazil genome sequences available to date. So that is pretty effective.”

The data, Loman said, will help build a picture of Zika’s evolution and explain how it has spread across Brazil, as well as make it easier to project how it will spread to other regions in the future.

Loman and colleagues are training their Brazilian collaborators to use the MinION devices — effectively bringing a new technology to use against Zika to the area that has been hardest hit. Brazil has been at the center of the recent Zika outbreak and has experienced the virus’ worst effects, including most of the reported cases of microcephaly and other fetal malformations that have occurred worldwide.

Loman wishes the rapid sequencing being conducted by the mobile lab would already be an available technology in the areas where they are stopping.

“Ideally, we wouldn’t be on the road,” he said. “It doesn’t make sense to spend all of your time driving and not working.”

Tracking Zika on a bus through the heart of the Brazilian outbreak has presented a unique set of challenges, like keeping reagents cool between stops, Loman said. Keeping the lab stocked with everything the team needs also has been an issue. After a colleague forgot the nucleotides needed to do PCR, the team had to find a fresh supply. And pipette tips are being used faster than expected, so Loman planned to spend more than $1,000 at their next stop to buy more.

Plans for a second lab inside a trailer were abandoned when the tow bar connecting the trailer to a van fell off, Loman said.

“The road trip is a very intense 3 weeks,” he said.

Loman and colleagues are not just screening patients for Zika. Along for the ride are entomologists from the Evandro Chagas Institute, who collect and identify mosquitoes that are then screened for Zika.

Loman also was part of the team that used a similar method to sequence virus samples in Guinea during the Ebola outbreak. There, they sequenced 142 Ebola samples and provided WHO epidemiologists with real-time results about how the cases were related.

As in Guinea, they have found it frustrating to use a mobile internet connection for their analysis in Brazil. However, they have managed to do some work offline, although the battery-draining process means they constantly need to charge their laptops, Loman said.

In Guinea, the laboratory set up by Loman and colleagues had been packed and transported in airline luggage weighing about 110 pounds, but it was not mobile in the same sense as the one being used in Brazil. The lab in Guinea was initially installed at a hospital in Conakry and later moved to a lab in Coyah prefecture. The first and last stops in Brazil are separated by more than 2,000 kilometers, making a road trip more practical.

“It makes much more sense for this project than in Africa,” Loman said.

As the trip progresses, the team is making its data available for free on the project’s website at http://zibraproject.github.io. – by Gerard Gallagher

Disclosure: Loman reports being a member of the MinION Access Programme and has received free-of-charge reagents from Nanopore.