HIV patients less likely to receive treatment for many cancers

An analysis of more than 2 million U.S. cancer patients suggested that those with HIV are less likely to receive cancer treatment, regardless of insurance status or comorbidities.

“HIV-infected patients with cancer have lower overall survival compared with HIV-uninfected individuals,” they wrote. “Although this may in part be related to deaths from AIDS-related complications, a recent population-based study found higher cancer-specific mortality among HIV-infected vs. HIV-uninfected patients with cancer. Lack of appropriate cancer treatment may contribute to worse cancer-specific mortality.”

To test this hypothesis, Suneja and colleagues examined patient data reported to the National Cancer Data Base from 2003 to 2011. The researchers included all adult patients aged younger than 65 years diagnosed with the 10 most frequent cancers, and collected demographic, treatment, comorbidity and insurance status data. The investigators then conducted an analysis to identify predictors for lack of cancer treatment capable of controlling for comorbidity and insurance status, variables that they wrote have remained unexplored throughout past studies on HIV and cancer.

“HIV-infected individuals frequently have other illnesses, and patients with significant comorbid disease may not be candidates for standard cancer therapy,” Suneja and colleagues wrote. “Similarly, insurance status also plays an important role in access to and delivery of cancer treatment. HIV-infected patients in the United States are more likely to be uninsured or underinsured compared with the HIV-uninfected population, which could be a major contributing factor [in poor patient outcomes].” 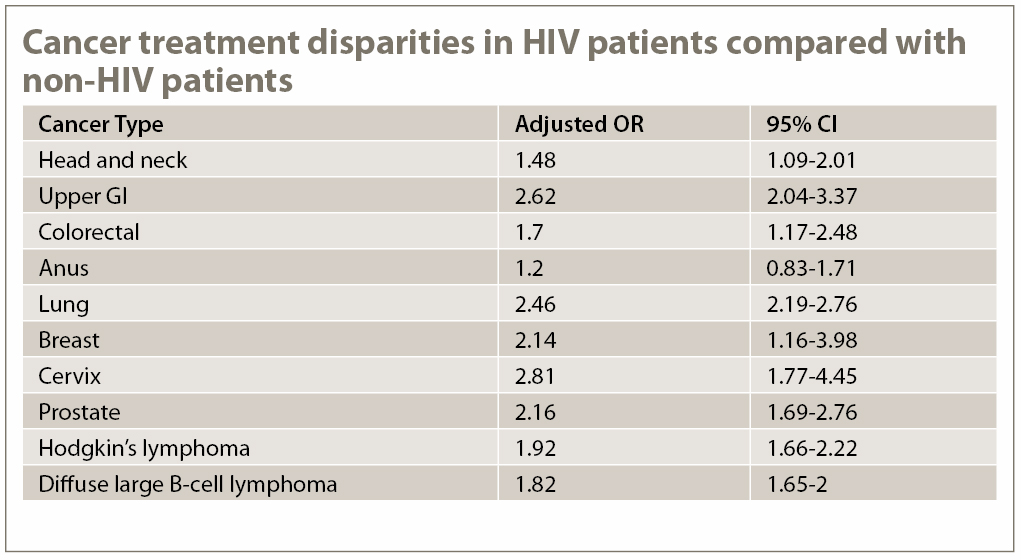 The study’s final cohort included 10,265 HIV patients and 2,219,232 patients without HIV, the researchers wrote. Those in the HIV group were younger (median age, 47 years vs. 55 years), and were more often non-Hispanic black (41.1% vs. 13.2%) and Hispanic (14% vs. 5.7%). Patients without HIV more often had private insurance and lower modified Charlson-Deyo comorbidity score.

“These findings suggest that cancer care providers and policymakers need to devote special attention to the HIV-infected patient population to understand and address the factors driving differential cancer treatment,” the researchers wrote.

Suneja and colleagues stressed the importance of these findings in light of data suggesting increased aging and cancer rates among HIV patients, such as those reported by Michael J. Silverberg, PhD, MPH, research scientist in the division of research at Kaiser Permanente Northern California, and colleagues last October.

To determine whether the increase of cancer in this population was due to increased lifespan or other influences, Silverberg and colleagues compared time trends in the incidence of cancer by age 75 years among 86,620 individuals with HIV and 196,987 individuals without HIV from the North American AIDS Cohort Collaboration on Research and Design of International Epidemiologic Databases to Evaluate AIDS who were followed between 1996 and 2009.

“The high cumulative incidences by age 75 years for Kaposi’s sarcoma, non-Hodgkin’s lymphoma and lung cancer indicate that public heath efforts need to be intensified to promote early, sustained antiretroviral therapy, smoking cessation and lung cancer screening,” Silverberg and colleagues wrote. “As the population with HIV ages, future estimates of cumulative incidence could be stratified by levels of cancer risk factors such as CD4+ count, smoking, alcohol consumption, and HBV or HCV infection, to more accurately inform patients and providers about risk and to help further target prevention efforts.” – by Dave Muoio

We have long known of the association of HIV infection and cancer risk. With more effective HIV therapy some, but not all, cancers are seen less often. Still, all patients with HIV and cancer deserve the best possible cancer management.

This study adds troubling new information to our concern that persons with HIV often receive less appropriate care than those without this infection. Whether this is a reflection of economic issues or other factors is not yet completely clear, but this area should be urgently investigated. Our advances in treating HIV will have less impact if other care is not being provided.