A research team led by the NIH discovered a vulnerable site on HIV that may be used as a target for future vaccines and identified a broadly neutralizing antibody that binds to the site, according to recent findings.

The target site, called the fusion peptide, is a string of eight amino acids that allows the virus to fuse and infect a cell, and has a simpler structure compared with other vulnerable sites studied for HIV vaccine development, according to a press release. 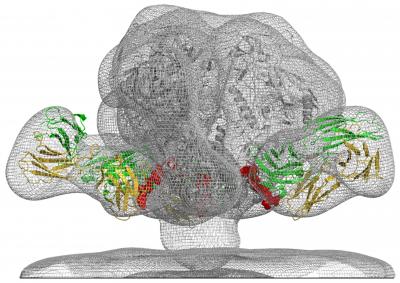 Figure 1. This image represents the VRC34.01 antibody (green and yellow) attached to the fusion peptide (red).

During a recent investigation, Rui Kong, PhD, of the vaccine research center at the National Institute of Allergy and Infectious Diseases, and colleagues examined serum from an HIV-infected patient that demonstrated potent neutralization. They found the most potent serum-neutralizing antibody to be VRC34.01, which neutralized 16 of 22 HIV-1 Env-pseudoviruses and 49% of 208 HIV-1 strains, and discovered that the broadly neutralizing antibody (bnAb) binds to the fusion peptide and a sugar molecule.

The researchers crystallized VRC34.01 while it was attached to the virus to further characterize the antibody. An analysis revealed the antibody prevents the virus from infecting the cell by obstructing conformational changes in glycoprotein(gp)120 and gp41 subunits of the HIV-1 envelope glycoprotein (Env) trimer needed for viral entry.

Kong and colleagues also found that the immune system often attacks the fusion peptide in an effort to block HIV from infecting a cell, according to the release. An analysis of serum samples collected from 24 HIV-infected volunteers showed that sera of 10 patients targeted the site.

The researchers are working to develop a vaccine designed to elicit antibodies similar to VRC34.01, the release said. – by Stephanie Viguers