Vaccination was reported to provide moderate to high protection against H1N1pdm09, H1N1 (pre-2009) and type B influenzas, according to the researchers. However, greatly reduced vaccine effectiveness (VE) was observed during H3N2 influenza seasons, highlighting a need to develop alternative manufacturing methods for this particular subtype, they wrote.

“In a previous meta-analysis of [randomized clinical trials (RCTs)] in healthy adults, we found that pooled vaccine efficacy was 59% against all strains,” Edward A. Belongia, MD, of the Marshfield Clinic Research Foundation in Wisconsin, and colleagues wrote. “Although the RCT is the optimal design to minimize bias and confounding, it has important limitations. RCTs are often limited to one or two seasons, enroll healthy individuals, have low power to measure efficacy by subtype and are not feasible to do annually.”

To avoid these issues and report VE, Belongia and colleagues conducted a meta-analysis of published studies that used a test-negative design (TND) to report estimates by influenza type and subtype. TND studies published from Jan. 1, 2004 to March 31, 2015 that reported VE for at least one season of H3N2, H1N1, H1N1pdm09 or type B; recruited patients based on predefined illness criteria and PCR confirmation; and reported results from age-adjusted logistic regression models or age-stratified VE estimates were eligible for inclusion. The researchers excluded studies that were restricted to hospitalized or special populations, examined live-attenuated vaccine or studied pre-pandemic seasonal vaccines against H1N1pdm09. Data from these studies relevant to the analysis were extracted and examined for each included type and subtype.

Of the 3,368 identified publications, 56 were selected for full review and met the researchers’ eligibility criteria. These primarily were conducted within Europe and North America, and 93% were published after 2010. Of the 114 reported VE estimates, 30% were for seasonal vaccines against H3N2, 32% type B, 25% H1N1pdm09, 4% against H1N1 (pre-2009) and 9% for monovalent vaccine against H1N1pdm09.

The researchers noted some of the limitations of their analysis, such as the scarcity of eligible studies before 2009 and the growing evidence of previous seasonal vaccine’s effect on subsequent VE. However, they wrote these results demonstrate an immediate need to improve the effectiveness of poorly performing vaccines.

“We have shown that influenza vaccines provide substantial protection against H1N1pdm09, H1N1 (pre-2009) and type B, and reduced protection against H3N2,” Belongia and colleagues wrote. “An accumulating body of evidence suggests that egg-based manufacturing is not optimal for H3N2 influenza viruses that are poorly adapted for growth in eggs. A crucial need exists for alternative vaccine technologies that generate greater protection against H3N2 than do current vaccines, and product-specific VE studies will be needed to assess their effect after licensure.”

This is a substantial improvement over the 2014-2015 vaccine, which reported 23% efficacy against circulating H3N2 due to antigenic drift.

Disclosure: Belongia reports research support from MedImmune. Please see the full study for a list of all other authors’ relevant financial disclosures. 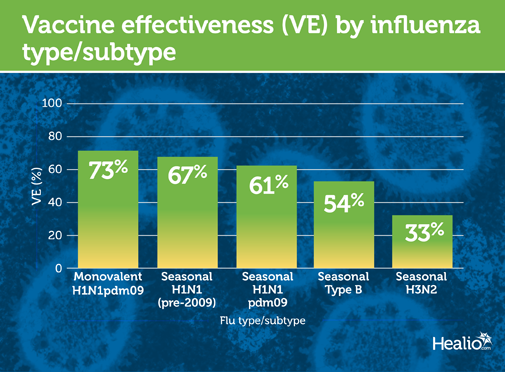