Despite observed declines in CD4 testing rates from 2009-2013, Veterans Affairs hospitals could further reduce testing by nearly 30% with no clinical consequences, according to a recent analysis of patients receiving HIV care through the health system.

Cutting back on unnecessary testing would result in a modest annual cost benefit, reduce patient anxiety and free health care providers to focus on other patient care, the researchers wrote.

“Recent studies suggest that patients who are not immunocompromised and are successfully using ART to suppress HIV do not benefit from periodic CD4 testing,” the researchers wrote. “The 2014 update to [HHS] guidelines recommended that in individuals with viral suppression, CD4 testing be considered optional in those with sustained CD4 count of [at least] 500 cells/mm3 and that patients with a count of between 300 and 500 cells/mm3 for at least 2 years be tested only annually. These recommendations were unchanged in 2016.”

To examine the impact of these and other recommendations to reduce testing, researchers accessed data archived from 2009 to 2013 to enroll a cohort of patients receiving HIV care through the VA health system. To be eligible, participants were required to have at least four HIV-1 RNA tests and four CD4 tests during the study period. Based on HHS guidance, patient testing was categorized as intensive, minimal or optional, with the number of patient-days spent under each category and a patient’s final status incorporated into the analysis. Using these data, the researchers determined trends in testing frequency, cost, and test result outcomes within the patient groups.

Of the 37,251 tested HIV patients identified, 28,530 had at least four of each test and were included in the analysis. Sixty-five percent of these entered the study virally suppressed, and 42% began with CD4 counts greater of at least 500 cells/mm3. On average, participants were in the study for 3.5 years, and received 3.3 CD4 tests and 3.4 viral load tests annually.

CD4 testing declined 10.8% over the course of the study period. Based on the number of patients seen in 2012, the researchers estimated that an additional 5,346 tests would have been ordered in 2012 had no shift occurred. Despite this, 11,085 fewer tests would have been conducted in the same year if all patients eligible for optional monitoring had remained untested. Similarly, increasing the interval for patients in need of minimal monitoring from the 131 days observed to the 365 days recommended, CD4 testing would have been reduced by 64.1%, or 6,093 tests. Taken together, 28.9% of the CD4 tests conducted at VA centers in 2012 were avoidable based on current guidelines.

The researchers found that implementing this reduction would have saved the health care system approximately $600,000. While this modest cost benefit would be welcome, the researchers wrote that the savings are secondary to the patient and provider benefits that would come from avoiding unnecessary testing.

“Reduced CD4 monitoring of healthy patients can reduce patient anxiety or concerns about normal fluctuation in CD4 count,” they wrote. “Time currently spent reviewing CD4 results could instead be used to address other health issues, such as lipid management, smoking cessation, weight loss or alcohol use.” – by Dave Muoio

Department of Health and Human Services. Guidelines for the use of antiretroviral agents in HIV-1-infected adults and adolescents. www.aidsinfo.nih.gov/contentfiles/adultandadolescentgl.pdf. Accessed April 4, 2016. 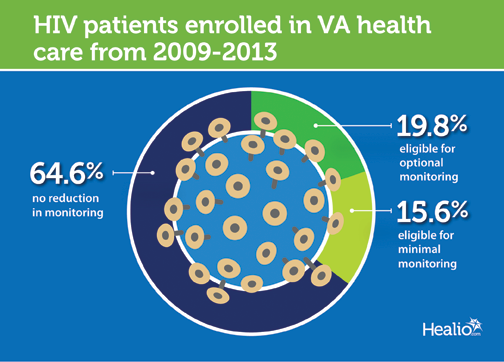