The 2015-2016 influenza season has been milder than the previous three seasons and appears to have peaked later than normal, according to the CDC.

“It looks like March will have been the peak for this season,” Lynnette Brammer, MPH, epidemiologist for the CDC’s domestic influenza surveillance team, told Infectious Disease News.

However, because influenza viruses can circulate year-round in the United States, Brammer said people should continue to get vaccinated. According to the latest data, this season’s vaccine has been much more effective than the vaccine from last season, and several indicators of influenza activity are down.

It would be just the third time in the last 19 years that influenza season peaked in March, according to Brammer. The most common month for peak activity is February, she said.

“We’ve never had an April peak, so it’s a bit later than normal,” she said. “The previous three seasons, though, were earlier than normal. They all had a December peak.” 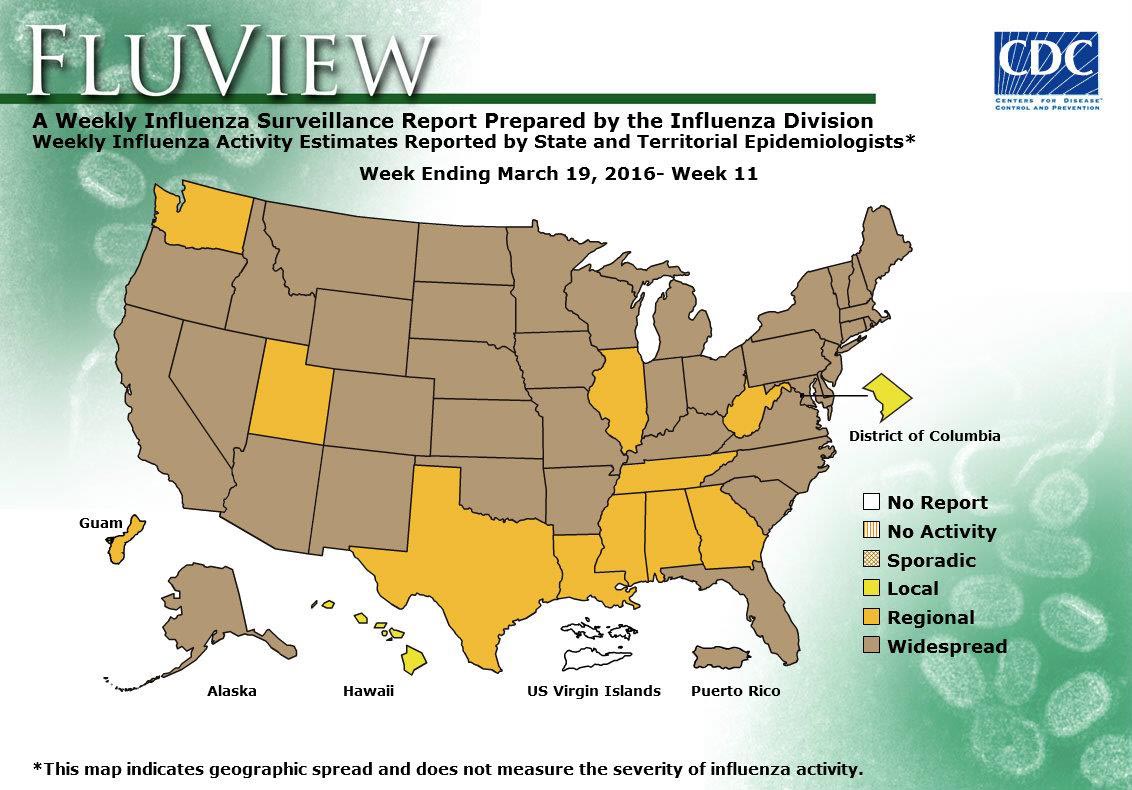 Influenza A (H1N1) viruses have been the most prevalent this season, according to Brammer.

From Oct. 4 through March 26, 478,384 specimens were tested at clinical laboratories, and 9.4% were positive for influenza, according to CDC data. Influenza A virus accounted for 74.5% of the positive tests.

“The proportion of positive tests at clinical labs is a more accurate reflection of what is actually going on out there,” Erin Burns, CDC spokeswoman, told Infectious Disease News.

Among all hospitalizations resulting from influenza, 79.6% were associated with influenza A. Of the specimens with subtype information, A (H1N1)pdm09 was predominant (90.1%).

As of March 26, there were 33 influenza-associated pediatric deaths reported to the CDC — far fewer than in each of the past three seasons, when they ranged from 111 to 171.

“Flu causes serious illnesses and deaths every year,” Joseph Bresee, MD, chief of CDC’s epidemiology and prevention branch, said in a recent statement. “This season, CDC has received reports of hospitalizations and deaths in young, otherwise healthy people who were infected with influenza A (H1N1), but not vaccinated.”

In a preliminary report in late February, the CDC said the 2015-2016 influenza vaccine showed 59% effectiveness — much greater than last season.

“This means that getting a flu vaccine this season reduced the risk of having to go to the doctor because of flu by nearly 60%,” Bresee said at the time. “It’s good news and underscores the importance and the benefit of both annual and ongoing vaccination efforts this season.”

Last season’s influenza vaccine was only 23% effective, chiefly because the majority of circulating influenza A (H3N2) viruses — the most prevalent subtype — did not match the vaccine’s H3N2 component.

The components of next season’s influenza vaccine already have been determined. On March 4, the FDA committee in charge of vaccines adopted WHO’s recommendations in a unanimous vote. WHO has recommended the trivalent influenza vaccine contain A/California/7/2009 (H1N1)pdm09-like virus, A/Hong Kong/4801/2014 (H3N2)-like virus and B/Brisbane/60/2008-like virus. It recommended that quadrivalent vaccines also should include B/Phuket/3073/2013-like virus. – by Gerard Gallagher