Researchers determined that cities in southern Florida and impoverished areas of southern Texas are more susceptible to local outbreaks of Zika virus than anywhere else in the United States due to climate, a strong potential for travel-related virus introduction and other factors.

Even during winter months, cities in southern Florida and Texas can sustain low-to-moderate populations of the Aedes aegypti mosquito, the primary vector of Zika virus, according to the researchers, who studied weather models and travel patterns to assess the risk posed to 50 U.S. cities.

Their results showed that each city could support the mosquito during peak summer months, although not every city has documented populations of A. aegypti.

“This research can help us anticipate the timing and location of possible Zika virus outbreaks in certain U.S. cities,” researcher Andrew Monaghan, PhD, of the National Center for Atmospheric Research (NCAR), said in a news release. “While there is much we still don’t know about the dynamics of Zika virus transmission, understanding where the Aedes aegypti mosquito can survive in the U.S. and how its abundance fluctuates seasonally may help guide mosquito control efforts and public health preparedness.” 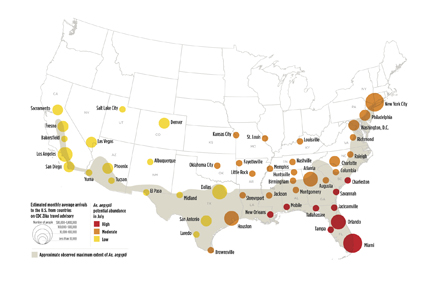 Figure 1. Zika outbreaks in the U.S. are more likely to occur in southern Florida and impoverished areas of southern Texas, according to researchers.

While Latin American and the Caribbean are experiencing a Zika virus pandemic, cases in the U.S. have been limited and associated with only travel or sexual transmission, the researchers noted. For local transmission to occur here, Zika would have to be introduced by travelers or mosquitoes infected with the virus and become sustained in local A. aegypti populations, they wrote.

That is possible in southern parts of Florida and Texas year-round, but only possible in other cities depending on the weather, according to Monaghan and colleagues. They ran two computer models that simulated the effect of meteorological conditions on the lifecycle of A. aegypti within the known range of the mosquito in the U.S. — as far north as New York and as far west as Los Angeles and other California cities.

Some of their observations, taken from the study:

Northern cities could become vulnerable if A. albopictus begins to carry the virus because the species is more tolerant of cold temperatures, Monaghan and colleagues said.

Although they showed how A. aegypti might survive in different areas of the U.S., Zika virus is less likely to spread here than in Latin American and the Caribbean because of lifestyle factors such as living and working in air conditioned and largely sealed homes.

“Even if the virus is transmitted here in the continental U.S., a quick response can reduce its impact,” study researcher Mary Hayden, PhD, also of NCAR, said in the release.

Monaghan and colleagues estimated the number of passengers arriving on direct flights from 22 Latin American countries listed on the CDC’s travel advisory for Zika as of Jan. 29, and found that large U.S. cities with major international airports received the most.

Miami; Houston; and Orlando, Florida, were among the cities having both high potential for A. aegypti abundance and large volumes of passengers from those areas under CDC travel advisory, they wrote.

One area of concern is the border region from Texas to California, which could be at risk for transmission because of the high number of U.S.-Mexico border crossings each month and the increased percentage of households near the border that live below the poverty line. Five times as many people cross the U.S.-Mexico border monthly than do air travelers to the 50 cities collectively, according to Monaghan and colleagues.

Poverty may increase exposure to mosquitoes because of its link to a number of risk factors, including lower usage rates of air conditioning, torn or missing screens, and a decreased access to safe water and sanitation, Monaghan and colleagues said. However, poorer areas are often rural and thus less likely to be inhabited by A. aegypti, which prefers urban areas, they said. – by Gerard Gallagher