During the recent Ebola epidemic, researchers were able to generate same-day genomic sequencing of virus samples using a mobile lab that had been packed into airline luggage and flown to West Africa.

The lab, which included three lightweight MinION sequencing devices (Oxford Nanopore Technologies) and four laptops, was able to achieve results in less than 24 hours, with the sequencing process taking as little as 15 to 60 minutes. Its success — detailed by the researchers in a recent letter published in Nature — shows that real-time genomic surveillance is possible in resource-limited settings, giving doctors a new tool in their arsenal to rapidly monitor outbreaks of infectious diseases and help limit their spread.

“Genome sequencing information is valuable for researchers and epidemiologists during an epidemic. Yet, generating such information is a laborious process typically performed in well-equipped laboratories using large, delicate and expensive hardware,” researcher Nick J. Loman, PhD, MBChB, of the Institute of Microbiology and Infection at the University of Birmingham, United Kingdom, said in a news release. “Having a portable DNA sequencing system opens up the possibility to do outbreak genome sequencing in real-time, which can directly impact on the response on the ground, as well as providing a wealth of information about pathogen evolution. Crucially we shared our data as it was generated, increasing its use immensely.” 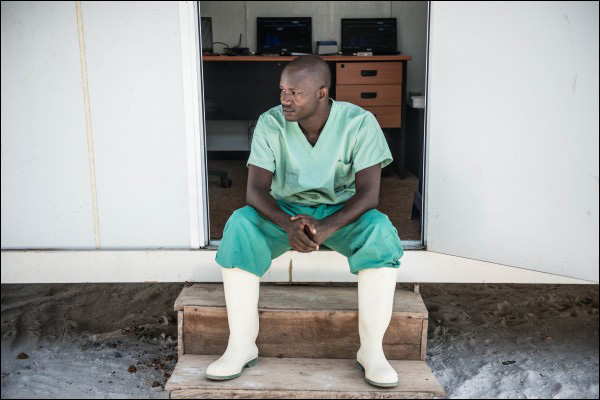 Role of ‘lab in a suitcase’

The “lab in a suitcase,” as it was described in the letter, was initially installed in the European Mobile Laboratory located in Donka Hospital in Guinea’s capital, Conakry. It was later moved to a lab in Coyah prefecture. In addition to the MinION devices and laptops, the genome surveillance system included a thermocycler, a heat block, pipettes, a mix of chilled and frozen reagents, and disposable consumables — all transported in luggage weighing about 110 pounds.

The type of work conducted by Loman and colleagues might normally be performed on a different continent from where the samples are collected. The mobile lab in Guinea, however, meant faster results to help guide control efforts during the outbreak.

Loman and colleagues sequenced 142 Ebola samples collected from March to October 2015, and provided WHO epidemiologists with real-time results about how cases were related. This type of rapid surveillance “may improve the efficiency of resource allocation and the timeliness of epidemiological investigations through genomically informed investigations of transmission chains,” Loman and colleagues wrote. “Real-time genomic surveillance also increases the possibility of identifying previously unknown chains of transmission.”

Loman and colleagues said they were able to identify evidence of frequent transmission across the Guinea border while integrating their dataset in real time with a second group performing sequencing in Sierra Leone.

“This system will continue to support the West African epidemic response and will serve as a template for genomic surveillance of future outbreaks,” Loman and colleagues wrote.

Small enough to fit in the palm of a user’s hand, the MinION portable genome sequencer resembles an oversize flash drive. It weighs less than 100 g and connects to a computer’s USB port, from which it also draws power.

Doing the job of much larger equipment, the MinION provided a rapid, inexpensive way to produce results, according to one researcher who has studied the device’s use as a diagnostic tool.

Justin O’Grady, PhD, of the University of East Anglia’s Norwich Medical School, said Loman and colleagues used one flow cell per sample tested, which cost $500 apiece when bought in bulk. The unit’s manufacturer now has a barcoding kit available for loading multiple samples on one flow cell, which would “significantly” reduce the cost per sample, O’Grady said.

He was part of a research team that used the MinION to determine antibiotic resistance in a strain of Salmonella typhi in a 2014 study, pinpointing the location of the resistance gene within 18 hours.

Loman and other researchers previously used the MinION to investigate a hospital outbreak of Salmonella.

“Flow cell quality has been variable in the past, but has improved significantly in recent times,” O’Grady told Infectious Disease News. “A good Internet connection is required for base calling, and this can be challenging in some settings. However, [the manufacturer] plans to release a standalone base-caller in the near future.”

The Ebola epidemic involved nearly 29,000 cases and killed more than 11,000 — the deadliest outbreak of the disease since its discovery in 1976.

The use of portable technology to rapidly sequence genes on the ground during the epidemic showed that the process no longer has to be confined to a far-off laboratory and “opens up genomic research to far more applications around the world … including cancer research,” Jared T. Simpson, PhD, of the Ontario Institute for Cancer Research and co-author of the study, said in a news release.

On Jan. 14, just hours after WHO declared that the Ebola epidemic in West Africa was over, a new case was confirmed in Sierra Leone, backing warnings that further flare-ups could be expected, Loman and colleagues said.

“Such cases pose pressing questions about their source that may be answered through genomic surveillance, by determining links to previously infected individuals and ruling out a new zoonotic spillover event,” they wrote. “We now stand poised to answer such questions quickly.” – by Gerard Gallagher