Recent findings published in Emerging Infectious Diseases showed that the 2014-2015 Ebola outbreak indirectly increased the number of deaths caused by malaria, HIV, and tuberculosis in Guinea, Liberia and Sierra Leone.

“Our results estimate that the 2014-2015 Ebola outbreak in West Africa has substantially impeded the fight against malaria, HIV/AIDS, and TB in the three countries most affected,” Martial L. Ndeffo-Mbah, PhD, MSc, research scientist in microbial diseases at the Yale School of Public Health, and colleagues wrote. “The deaths of several health care workers early in 2014, as well as the strain on health care facilities caused by increased numbers of patients and decreased staff, resulted in the closure of many clinics and the interruption of routine health delivery services, including HIV testing, childhood vaccinations, and maternity care.”

In West Africa, outpatient attendance dropped as low as 10% due to the fear of Ebola, the researchers wrote. As a result, patients with malaria, HIV or TB received less treatment, where yearly mortality rates without treatment are reported to be as high as 80% for severe malaria, 25% for HIV and 40% for TB. 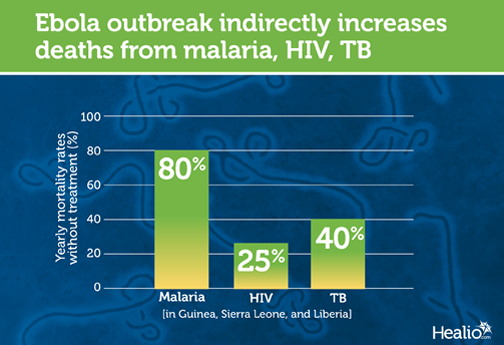 To estimate the indirect consequences of the 2014-2015 Ebola outbreak in Guinea, Liberia and Sierra Leone, the researchers developed a computational simulation disease progression model for malaria and a computational simulation decision tree model for HIV and TB, using epidemiologic data from demographic health surveys conducted by WHO. In addition, the researchers only considered deaths for the highest risk groups for each disease: Malaria among children aged older than 5 years, HIV for people aged 15 to 49 years, and active TB among all age groups. For each disease, the researchers assumed that the Ebola outbreak led to a 50% decrease in treatment coverage.

The researchers found that this reduction in access to care increased the deaths from malaria, HIV, and TB by 6,269 in Guinea, 1,535 in Liberia and 2,819 in Sierra Leone.

As little as a 15% decrease in treatment coverage would lead to more indirect than direct deaths from Ebola in Guinea, the researchers wrote. In addition, the Ebola outbreak mostly affected pediatric patients with malaria, with 4,275 deaths in Guinea, 788 in Liberia and 1,755 in Sierra Leone.

“The 2014-2015 Ebola outbreak was catastrophic in these countries, and its indirect impact of increasing the mortality rates of other diseases was also substantial,” the researchers wrote. “As the Ebola outbreak wanes, it is essential for control strategies to include a comprehensive approach not only to stem the spread of Ebola, provide care for medical complications of recovered case-patients, and offer support for affected families but also to address the extensive repercussions of the outbreak that will continue long after Ebola elimination.” – by Will Offit