Poor overall survival rates for HIV-associated Hodgkin’s lymphoma was linked to a lack of treatment, particularly among male patients who were black or white Hispanic, and poor prognosis in a subgroup of patients with undetermined histology, according to recent findings published in AIDS.

Results from previous observational studies suggested that overall survival outcomes for patients with and without HIV who also had Hodgkin’s lymphoma were similar, according to researchers. In contrast, population-based studies from the Centers for AIDS Research Network of Integrated Clinical Systems and the National Cancer Institute/Surveillance, Epidemiology and End Results program showed that HIV-positive patients receiving combination ART had poor overall survival, with a 5-year estimate of about 63%.

“Hodgkin’s lymphoma is generally believed to be highly curable,” Adam J. Olszewski, MD, associate professor of medicine at Alpert Medical School, Brown University, said in a press release. “We have an expectation to cure over 90% of early stage patients and even 70 to 80% of quite advanced cases.”

To investigate the unfavorable survival outcomes for patients with HIV, Olszewski and Jorge J. Castillo, MD, from the division of hematologic malignancies at Dana-Farber Cancer Institute, Harvard Medical School, collected data on 43,935 patients with Hodgkin’s lymphoma from the National Cancer Data Base from 2004 to 2012. They followed patients for a median duration of 51 months, comparing trends, management patterns and associated survival outcomes among patients with and without HIV. The results were adjusted for gender, race, year of diagnosis, type of health insurance, income, age, disease stage and the presence of B-symptoms. 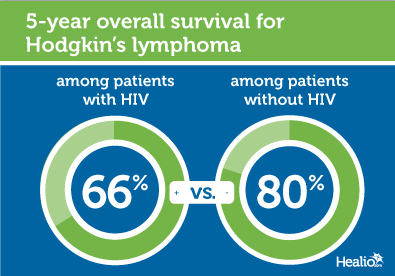 Sixteen percent of HIV-positive patients were not treated for their lymphoma compared with 9% of HIV-negative patients (P < .00001). Older, nonwhite men with an undetermined histology who lived in areas with the lowest median income were associated with a higher risk for nontreatment, the researchers wrote.

“These associations are concerning in the context of HIV incidence in the United States, which is nearly 10 times higher in African-Americans compared with whites, and the fact that according to our data half of currently diagnosed HIV-positive Hodgkin’s lymphoma patients are of black race,” the researchers wrote.

A separate analysis limited to HIV-positive patients who had received chemotherapy revealed that overall survival outcomes for those with nodular sclerosis, mixed cellularity, lymphocyte-rich and lymphocyte-depleted histology were similar to those of patients without HIV. Mortality, however, was significantly higher in HIV-positive patients with an undetermined histology (adjusted HR = 1.56; 95% CI, 1.31-1.85). A model fitted for all histologic subtypes also demonstrated significantly higher mortality in patients with HIV (aHR = 1.29; 95% CI, 1.15-1.44).

“Patients with undetermined histology require particular attention due to worse prognosis and high risk of nontreatment, and may be targeted by novel, alternative approaches,” Olszewski and Castillo concluded. – by Stephanie Viguers