“It is important that we continue to improve influenza vaccination coverage in children to reduce the overall illness burden of influenza, both by direct and indirect protection,” Manjusha Gaglani, MD, a pediatric infectious disease specialist at Baylor Scott & White Health, told Infectious Disease News. "Children aged 6 to 23 months can receive the inactivated flu shot and children aged 2 years or older can receive either the live or the inactivated vaccine, based on their individual health condition.”

In a report published in The Journal of Infectious Diseases, Gaglani and colleagues used test-negative case-control data from the U.S. Flu VE Network to compare the effectiveness of LAIV and IIV during the 2013-2014 season, when A(H1N1)pdm09 was the predominant strain. The analysis included 5,637 vaccine recipients.

“Since there has been minimal antigenic drift in A(H1N1)pdm09 viruses and the vaccine H1N1 component A/California/7/2009 has remained unchanged since 2009, these results were not unexpected,” Gaglani and colleagues wrote. 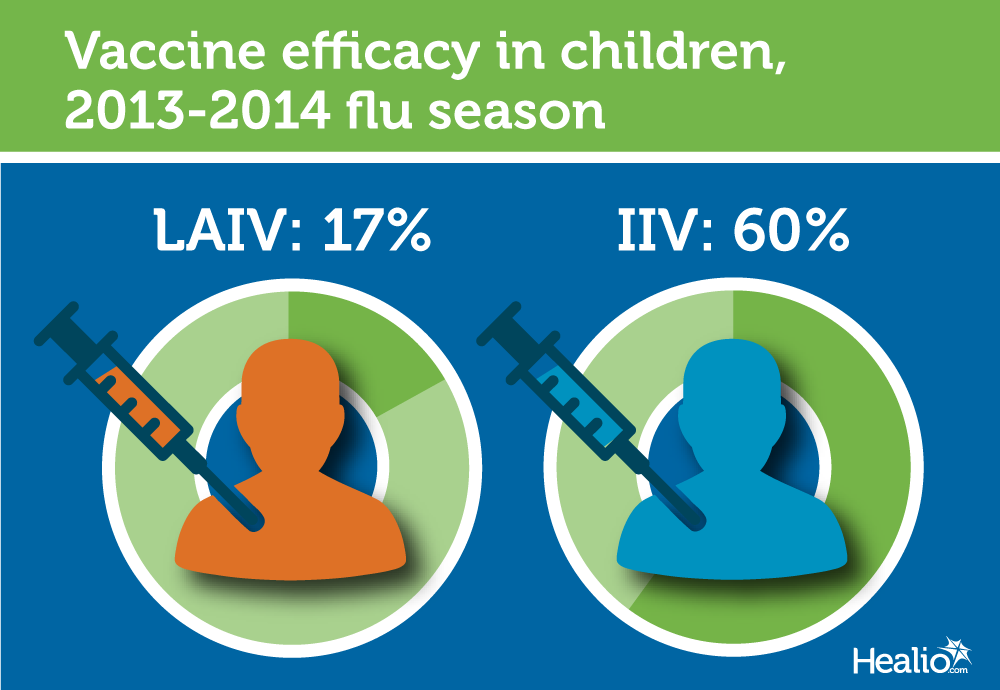 Gaglani and colleagues said one possible explanation for the “unanticipated finding” of the poor performance of LAIV is that the A(H1N1)pdm09 construct is less stable in higher ambient temperatures than other viruses included in the vaccine. Environmental stressors, like a break in the cold chain, for example, could potentially diminish its efficacy.

“Selection of an A(H1N1)pdm09 virus with improved thermostability for LAIV may improve the consistency of results but will require evaluation of effectiveness during another season when A(H1N1)pdm09 viruses circulate,” the researchers wrote.

Results also suggested A(H1N1)pdm09-containing vaccines offered some residual protection among individuals aged at least 9 years and among children aged 2 to 8 years if they had been fully vaccinated the previous season, although individuals with current vaccinations were somewhat better protected against influenza.

The mystery of immunity

Eighty years have passed since Robert E. Shope, MD, isolated influenza virus, and the scientific community’s understanding of human immunity against the virus is still incomplete, according to Andrew T. Pavia, MD, chief of the division of pediatric infectious diseases at the University of Utah School of Medicine.

“Many have called for new influenza vaccines, but, in the meantime, careful studies will help us understand and better use existing vaccines,” he wrote in a related editorial. “The characteristics of an optimal vaccine might include rapid and inexpensive production, broad protection against drifted and pandemic strains, and production of T-cell and B-cell memory. This goal is unlikely to be achieved by novel vaccine constructs alone. It will require a deeper understanding of the enigmas and mysteries of influenza pathogenesis and immunity.” – by John Schoen