A joint CDC/Veterans Affairs study of military veterans who were vaccinated against influenza shows greater efficacy for high-dose influenza vaccine as opposed to standard dose vaccine, but not until age 85 years.

“The main overall outcome was that we didn’t find a difference between the groups,” Darren Linkin, MD, with the CDC Prevention Epicenter Program, said in a press release. “But in a secondary analysis, there appeared to be a strong effect for those 85 and older.”

Linkin and colleagues conducted a retrospective cohort study of more than 165,000 patients aged 65 years and older at 23 VA medical centers who received either the HD or SD influenza vaccine during the 2010-2011 flu season. Of these patients, 25,714 received HD vaccine, while 139,511 received SD vaccine, researchers wrote.

The study tracked hospitalizations due to pneumonia or influenza as the primary outcome. Secondary outcomes included hospitalization for any cause and mortality. Outcomes were included if they occurred at least 2 weeks after vaccination and during the influenza season, researchers wrote. Patients were grouped by age: 65 to 74 years; 75 to 84 years; and 85 years and older.

The researchers found that .3% of all patients were hospitalized for pneumonia or influenza during the study period. There were no significant differences in the risk for hospitalization for influenza or pneumonia between those who received HD and SD vaccines (RR = .98; 95% CI, .68-1.4).

“It is possible that the effect of SD vaccine is lower in older subgroups, whereas the effect of HD vaccine is more stable as age increases. Further study is needed to evaluate this hypothesis,” the researchers wrote. 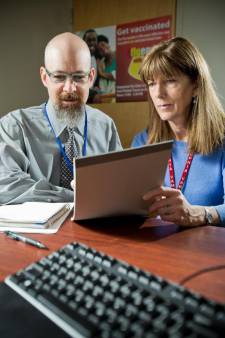 Findings of this study were in contrast to other recently published research, which showed efficacy for HD influenza vaccination among a broader spectrum of older adults. In a study from the FDA, which included 2.5 million Medicare beneficiaries aged 65 years and older who received HD or SD inactivated influenza vaccines from community pharmacies during the 2012-13 flu season, researchers found that HD vaccine was 22% more effective at preventing both probable influenza infections (95% CI, 15%–29%) and flu-related hospital admissions (95% CI, 16%–27%).

Sanofi Pasteur, which manufactures the HD vaccine under the Fluzone High-Dose Vaccine brand name, reported similarly contrasting data in a large-scale, multi-center efficacy trial published in the New England Journal of Medicine. This study, which included nearly 32,000 vaccine recipients during the 2011-12 and 2012-13 influenza seasons, found the HD vaccine to be 24.2% (95% CI, 9.7%–36.5%) more effective for adults aged 65 years and older.

“It would be good to have larger VA studies looking across multiple years,” Diane Richardson, PhD, co-director of the Biostatistics and Informatics Core in the VA’s Center for Health Equity Research and Promotion, said in the release. “I don’t think we have the final answers.” – by David Jwanier