Chronic infection with hepatitis C virus remains the leading indication for liver transplantation in the United States. As the prevalence of cirrhosis and hepatocellular carcinoma attributed to HCV infection are expected to rise during the next 2 decades, HCV will continue to be a major source of morbidity and will contribute to a growing health care burden associated with advanced chronic liver disease.

Recurrence of HCV infection is universal in all liver transplant recipients who demonstrate hepatitis C viremia at the time of transplantation. As HCV recurrence is associated with a significant risk for allograft dysfunction and cirrhosis, efforts to successfully eradicate the virus can have a major impact on post-transplant survival. In the past, treatment options have been limited in this unique population, particularly due to intolerance to interferon-alfa, increased potential for hematologic side effects during antiviral therapy and concerns for drug interactions associated with immunosuppressive therapy.

Recurrence of HCV, defined by detectable serum HCV RNA, following liver transplantation occurs in all patients with chronic HCV infection who demonstrate active viremia prior to transplantation. A surge in serum HCV RNA can be observed within hours of liver transplantation, followed by reinfection of the allograft and eventual establishment of a new baseline serum HCV RNA level. Acute hepatitis associated with recurrence can be seen within the first several months in more than half of patients, coinciding with an acute rise in serum aminotransferase levels and histological evidence of acute infection.

The clinical course of recurrent HCV is variable, in which hepatic fibrosis leading to cirrhosis may occur in up to 30% of patients. A rapidly progressive form of recurrence characterized by cholestasis and a high mortality risk, known as fibrosing cholestatic hepatitis C, occurs in less than 10% of patients. The development of post-transplant cirrhosis is associated with an increased risk for clinical decompensation and mortality. Consequently, HCV infection is an independent risk factor for decreased survival in liver transplant recipients. Many transplant centers perform annual liver biopsies in transplant recipients with HCV in order to identify these changes at an early time point.

Prior to the availability of DAA therapy, various treatment strategies involving combination peginterferon-alfa (PEG-IFN) and ribavirin (RBV) were utilized in an attempt to achieve viral eradication for recurrent HCV following liver transplantation. However, both pre-emptive and recurrence-based approaches were met with many challenges involving poor tolerability and low efficacy. 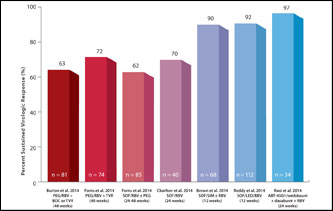 The PHOENIX trial, the largest prospective clinical trial involving a pre-emptive approach with initiation of treatment within 6 months of transplantation, reported early discontinuation due to adverse events in 28% of patients, significant anemia in 74% and requirements for dose reduction in 70% despite a dose escalation regimen for both PEG-IFN and RBV. The sustained virologic response in this setting was low at 22%, with no survival or histologic benefit after 2 years compared with patients randomly assigned to receive observation only. Similarly, recurrence-based approaches with dose escalating regimens of PEG-IFN and RBV were associated with early discontinuation in up to 30% of patients, significant anemia in 75% and low SVR rates at 30%.

In contrast with kidney transplant recipients, in which high rates of acute cellular rejection and kidney allograft loss have been reported in the setting of IFN-based therapy, large-scale reviews of multiple studies involving IFN-based therapy following liver transplantation have reported a very low incidence of acute cellular rejection of approximately 5%. The incidence of biopsy-proven acute cellular rejection was studied prospectively in the PHOENIX trial, in which the occurrence of rejection was equivalent between patients randomized to treatment (5.6%) versus observation only (6.5%). The emergence of the first-generation NS3/4A protease inhibitors, telaprevir and boceprevir, marked the beginning of a new era in antiviral therapy involving the use of DAA agents targeted against various phases of the HCV life cycle. The use of telaprevir or boceprevir in combination with PEG-IFN and RBV notably increased treatment efficacy for patients with HCV genotype 1 infection.

However, the inclusion of PEG-IFN in these treatment regimens remains a major limiting factor in treatment tolerability, particularly in the post-transplant setting. Several multicenter cohort studies have reported a high rate of adverse events, particularly anemia, in which the majority of patients required RBV dose reduction and more than half required blood transfusions. Additional reported adverse events have included renal insufficiency, infection and death.

Selection of appropriate candidates for IFN-based therapy following liver transplantation is an important consideration as patients may develop postoperative complications, renal insufficiency and persistent cytopenias — all of which may further limit treatment eligibility.

An additional concern involves the potential for drug interactions between telaprevir or boceprevir, both substrates and potent inhibitors of cytochrome P450 (CYP) 3A4, and immunosuppressive agents. Pharmacokinetic studies revealed both telaprevir and boceprevir significantly increase exposure to the calcineurin inhibitors cyclosporine and tacrolimus, as well as the mammalian target of rapamycin (mTOR) inhibitor sirolimus (see Table).

The increased potential for adverse events related to overexposure to calcineurin inhibitors and sirolimus highlight the need for close monitoring and attention to immunosuppressive levels while undergoing antiviral therapy with PEG-IFN, RBV and telaprevir or boceprevir in this population. Despite these challenges, SVR associated with these IFN-based regimens have been reported in as high as 60% to 70% of patients (see Figure).

One study by Forns and colleagues evaluated sofosbuvir-based therapy in a compassionate-use setting and demonstrated improved clinical outcomes in a cohort of patients with primarily HCV genotype 1 infection, severe recurrence and a life expectancy of less than 1 year. Although adverse events were common in this high-risk population, more than two-thirds of patients were able to complete 24 to 48 weeks of therapy and no serious adverse events were attributed to therapy. About half of the patients had post-transplant cirrhosis or clinical decompensation, while another half had severe early recurrence within 1 year of transplantation, including fibrosing cholestatic hepatitis C. Patients received a combination of sofosbuvir and RBV, with the addition of PEG-IFN in approximately one-thirdof patients. More than half demonstrated an improvement in laboratory parameters or a decrease in decompensating events during follow-up, including decreased encephalopathy and resolution of ascites. Despite the severity of disease in this population, end of treatment viral clearance was achieved in 87% and SVR in 62%.

In transplant recipients with HCV recurrence and less severe disease, IFN-free DAA regimens have reported even greater tolerability and higher rates of efficacy.

A multicenter, prospective study of sofosbuvir and a low ascending dose of RBV for up to 24 weeks in a cohort of 40 patients with primarily recurrent HCV genotype 1 infection reported no serious adverse events related to therapy. Eighty-eight percent of the patients were prior nonresponders and 40% had compensated cirrhosis. All patients achieved viral clearance by end of treatment; however, relapse occurred in some patients, leading to an SVR in 70%. No drug-drug interactions were present and renal function remained stable in all patients, indicating a high level of safety associated with this regimen in patients on immunosuppressive therapy.

An alternative treatment regimen may include a 12-week combination of sofosbuvir and the currently available NS3/4A protease inhibitor simeprevir (Olysio, Janssen Therapeutics), as recommended by the American Association for the Study of Liver Diseases (AASLD) and the Infectious Diseases Society of America (IDSA), in collaboration with the International Antiviral Society-USA. Prospective data involving a consortium of academic and community investigators, known as the HCV-TARGET study, were recently presented and noted a high SVR of 90% associated with this regimen in the post-transplant setting. Although no clinically significant drug interactions have been observed between simeprevir and calcineurin inhibitors, simeprevir has been associated with transient hyperbilirubinemia attributed to inhibition of the bilirubin transporters OATP1B1 and MRP2.

Recent data have also described the use of three new DAA agents including the NS3/4A protease inhibitor ABT-450 boosted with ritonavir, the NS5A inhibitor ombitasvir (formerly ABT-267) and the non-nucleoside NS5B polymerase inhibitor dasabuvir (formerly ABT-333; all AbbVie) plus RBV. Low-dose ritonavir is used in this regimen to boost blood concentrations of ABT-450 and allow for once-daily dosing. In a multicenter, prospective trial evaluating this DAA combination for 24 weeks in 34 patients with post-transplant recurrent HCV, end-of-treatment viral clearance was achieved in all patients and SVR was reported in 33 of 34 (97%). Therapy was well tolerated in this cohort characterized by mild hepatic fibrosis (stage ≤F2). However, anemia was reported in 29% of patients and dose adjustments for calcineurin inhibitors were required due to drug interactions, in which the half-life of cyclosporine and tacrolimus increased by threefold and sevenfold, respectively.

The anticipated availability of additional DAA agents in the near future may provide further opportunities to develop highly effective and tolerable regimens for patients with recurrent HCV.

In particular, the NS5A inhibitors ledipasvir (Gilead) and daclatasvir (Bristol-Myers Squibb) may have an advantage, as they are known to have high potency against HCV in combination with sofosbuvir and have no known effect on CYP 3A4 metabolism. A 12 week regimen of sofosbuvir, ledipasvir, and ribavirin was recently reported to result in high SVR rates at 92% overall, including an even higher SVR of 96% in patients without cirrhosis or early (Child’s A) cirrhosis. Additional data from compassionate-use programs and case reports have described combination sofosbuvir and daclatasvir as an effective regimen in post-transplant HCV recurrence with severe disease, including fibrosing cholestatic hepatitis C. Prospective studies evaluating IFN-free regimens containing sofosbuvir plus daclatasvir in the post-transplant setting are ongoing.

Although our ability to eradicate HCV in the post-transplant setting has been greatly enhanced by the use of DAA agents in various combinations, the use of IFN-containing regimens has come with a cost, particularly in the form of limited eligibility, decreased tolerability and a higher potential for adverse events. Fortunately, the arrival of additional DAA agents will likely obviate the need for IFN entirely.

However, concerns will remain for potential drug interactions associated with emerging DAA agents, including effects on CYP metabolism and drug transporters such as P-glycoprotein. Although these advances will lead to greater efficacy in achieving pre-transplant viral clearance, antiviral therapy may not be possible in some candidates and must be given following transplantation. In this case, it appears that earlier treatment will be important in order to achieve optimal efficacy and to avoid the challenges associated with treatment in the setting of advancing disease attributed to HCV recurrence.