A 24-year-old white female with hepatitis C virus from IV drug abuse, depression and herpes simplex virus infection was referred to the liver clinic by her primary care doctor due to significant interim elevations in her liver-associated enzymes from a normal baseline 6 months earlier.

She was diagnosed with HCV genotype 1a infection 4 years ago, shortly after she stopped using IV drugs. During the 6-month period of active injection drug use, she denied developing jaundice and remained asymptomatic. However, a friend with whom the patient shared needles informed her of having HCV, which prompted her to get tested. She was treatment-naive when she was seen in our clinic.

The patient had recently completed a repeat course of valacyclovir (Valtrex, Glaxo-SmithKline) for a herpes simplex virus outbreak. She did not take any other medications and did not use any multivitamins or herbal supplements. She had a male partner with whom she was sexually active, and they did not use barrier contraception. She was employed as an accounting assistant at a construction company, did not smoke tobacco, but drank three to four alcoholic beverages per week. There was no recent travel history. Her family history was negative for any liver diseases, but a maternal aunt and grandmother had hypothyroidism.

Upon presentation to clinic, her vital signs were within normal limits. She appeared well nourished, with normal concentration and mood. Her BMI was 26 kg/m2. There were no clinical stigmata to suggest portal hypertension or cirrhosis. She had no scleral icterus. The abdomen was soft, non-distended and without hepatosplenomegaly or masses. Her review of systems was unremarkable, with no chronic fatigue, anorexia, abdominal pain, arthralgias or other symptoms suggestive of autoimmune disorders. 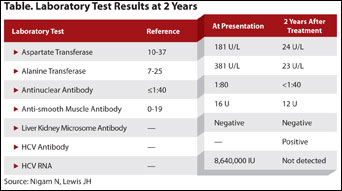 Laboratory testing showed a marked elevation in aminotransferases from previously normal values with aspartate aminotransferase of 181 U/L and alanine aminotransferase of 381 U/L, as well as hyperglobulinemia. Bilirubin and alkaline phosphatase were normal, as was the international normalized ratio. Thyroid-stimulating hormone and complete blood count also were within normal range.

Her hepatitis C viral load was >8 million IU, indicating she was still actively infected. The patient was immune to hepatitis B virus, but not hepatitis A virus. The antinuclear antibody (ANA) was positive, with a titer of 1:80. Anti-smooth muscle antibody and liver-kidney microsomal antibody were negative. A FibroSure test (Echosens) showed moderate inflammation of the liver (score, A2) without fibrosis (F0).

Given the interval rise in ALT and AST, the presence of an autoantibody and hyperglobulinemia, in the setting of her chronic HCV, it was elected to perform a percutaneous liver biopsy to aid in the diagnosis.

This patient with untreated chronic HCV infection developed significantly elevated AST and ALT in the setting of recent antiviral therapy for herpes virus and the presence of ANA positivity and hyperglobulinemia. The differential diagnosis includes exacerbation of her HCV, a superimposed acute viral hepatitis, drug-induced liver injury, alcoholic hepatitis, non-alcoholic fatty liver disease and autoimmune hepatitis. Clinically, the patient reported no jaundice, dark urine, nausea or abdominal pain, fatigue or anorexia suggestive of acute viral hepatitis. Not only did the patient deny alcohol abuse, the AST to ALT ratio was the opposite of what one would expect with alcoholic liver disease.

The patient was overweight with an above normal BMI (26 kg/m2), but had no other features to suggest the possibility of NAFLD. Moreover, her aminotransferases had been normal months earlier. Although we wondered about the possibility of drug-induced liver injury from the valacyclovir, based on rare case reports in the literature, this seemed unlikely given that she had used this medication multiple times in the past without incident.

The liver biopsy revealed chronic active hepatitis (grade 3 of 4) with mild fibrosis (stage F1). There was significant portal inflammation with numerous plasma cells, interface hepatitis and piecemeal necrosis, with lobular inflammation and occasional epithelioid granulomas (Figure 1). Stains for acid-fast bacilli and fungi were negative. Although portal inflammation to this degree may be seen in chronic HCV, the presence of the plasma cell infiltrate and the panacinar inflammation was most consistent with moderately active autoimmune hepatitis.

Her ALT and AST normalized within 3 months of starting prednisone and azathioprine, and she did well on this regimen, with no exacerbation of her underlying HCV infection. A repeat biopsy after 18 months of treatment showed the autoimmune hepatitis to be in histological remission with no significant fibrosis (Figure 2). Therefore, concomitant triple therapy with telaprevir, pegylated interferon and ribavirin was administered for 6 months, resulting in a sustained virologic response (Table). Subsequently, her ANA became negative, the ALT/AST remained normal and the immunosuppressants were able to be tapered off.

The patient represents what we believe is an increasingly recognized, but still uncommon, overlap syndrome of chronic HCV complicated by autoimmune hepatitis. Although autoantibodies are seen in 40% to 50% of patients with chronic HCV, as well as NAFLD, most are only weakly positive and may be transient, and are not considered to reflect a separate autoimmune injury.

Autoimmune hepatitis has been extensively described in “overlap” with primary sclerosing cholangitis or primary biliary cirrhosis, but is only sporadically described in association with chronic viral hepatitis. Indeed, the revised international scoring system used for autoimmune hepatitis deducts points for the presence of underlying viral hepatitis and, generally, does not permit the concurrent diagnosis of both entities, making the diagnosis challenging. Nevertheless, in this patient, the interval rise in aminotransferases of more than 15-fold, the presence of hyperglobulinemia and a positive antinuclear antibody suggested the diagnosis, which was confirmed on liver biopsy.