Breaking Down the Connection Between HCV and Bone Disorders

An increasing body of evidence is showing associations between hepatitis C virus and bone disorders such as osteoporosis, low bone mineral density and fractures. However, the clinical community has yet to determine whether hepatitis C virus is causing these disorders or whether the connection exists because of comorbid factors frequently seen in patients with hepatitis C virus. As millions of new patients flood the system for treatment with novel direct-acting antiviral therapies, clinicians may find themselves dealing with an unexpected influx of brittle and broken bones.

Much of the research in this area involves patients coinfected with HIV/HCV. Because these two patient populations share several risk factors for bone disorders — smoking, injection drug use and poor nutrition among them — researchers have struggled to untangle the various causes and effects.

HCV Next asked experts to provide insight on the history of HCV and bone loss, to weigh in on the utility of dual energy X-ray absorptiometry (DXA) screening in younger populations and to address strategies for managing HCV patients with bone disorders, given that osteoporosis and other such conditions may be treated by a rheumatologist, an endocrinologist, an orthopedist or even a primary care physician. In addition, the impact of novel DAA therapies on HCV seems to be predictable at this point, but whether curing HCV will lead to improvements in bone health remains uncertain.

Todd T. Brown, MD, PhD, associate professor of medicine and epidemiology in the division of endocrinology, diabetes, and metabolism at Johns Hopkins University, said bone disorders in patients with liver disease have been on the radar of researchers and clinicians for some time. “It has long been known that patients with advanced liver disease from viral hepatitis and other causes have lower bone mineral density (BMD) and higher risk for fracture,” he said, noting that hepatic osteopathy is more likely in individuals with advanced liver disease or who are transplantation candidates. “The big question is whether or not the increased risk for osteoporosis and fracture is due to something intrinsically related to chronic HCV infection or due to risk factors associated with HCV.”

Brown highlighted a number of reasons why liver complications, particularly end-stage liver disease (ESLD), may be associated with bone loss. “Hormonal reasons, including lower testosterone in men, lower insulin-like growth factor concentrations and abnormal metabolism of vitamin D, all play a role,” he said. “Another is increased levels of inflammation. All of this contributes to this phenotype in ESLD patients.”

Perhaps more worrisome is that there is increasing recognition that even HCV populations without advanced liver disease are experiencing more osteoporosis, according to Brown. “Studies show increased fracture risk” among this population, he said.

One such study was conducted by Vincent Lo Re III, MD, MSCE, assistant professor of medicine and epidemiology at the University of Pennsylvania, and colleagues, who reported an increase in hip fracture risk among HCV monoinfected individuals compared with uninfected individuals. The risk was more than threefold (HR=3.56; 95% CI, 2.93-4.32) for women aged 18 to 39 years and more than twofold (HR=2.4; 95% CI, 2.02-2.84) for men in the same age group. This longitudinal study was conducted in 2009.

“We also found that HCV-infected patients with liver decompensation had modest increased rates of fracture compared with those without decompensated cirrhosis,” Lo Re said in an interview.

Roger Bedimo, MD, MS, chief of the infectious diseases section at VA North Texas Health Care System and associate professor of medicine at the University of Texas Southwestern Medical Center, has conducted many studies in this area. “It has taken some time for people to figure this out,” he said. “Many of our studies include patients with HIV/HCV coinfection, but when we look at HCV alone, we see a significantly high risk for fractures. The data are becoming abundantly clear, but we still need prospective analyses to confirm these findings.”

More research, hopefully, will shed light on if and how HCV causes bone disorders.

“The mechanisms for the association between HCV infection and both low BMD and hip fracture remain unclear,” Lo Re said. “It is thought that chronic HCV-induced inflammation is a key driver of the observed decrements in BMD and increased hip fracture rates. Elevated serum levels of inflammatory cytokines associated with chronic HCV infection — particularly, tumor necrosis factor-alpha, interleukin-1 and interleukin-6 — could increase receptor activator of nuclear factor kappa-B ligand, promoting osteoclastogenesis and increasing bone resorption.”

He added that tumor necrosis factor-alpha also inhibits osteoblast differentiation and collagen synthesis in osteoblasts and promotes osteoblast apoptosis. “The net effect of this inflammatory cascade could contribute to reduced BMD and increased fracture risk,” he said.

Bedimo and colleagues recently found that lower BMD in HCV is due to a low bone turnover state with no significant effect on bone turnover markers and is not correlated with liver severity as measured by aminotransferase-to-platelet ratio index (APRI) score.

For Lo Re, HCV-induced liver synthetic dysfunction might also be an important contributor to low BMD and increased fracture risk. “Liver synthetic dysfunction in the setting of hepatic decompensation could increase the risk for hypogonadism, reduce hepatic hydroxylation of vitamin D and impair hepatic production of insulin-like growth factor, which promotes bone formation, and these conditions could further reduce bone density and contribute to fractures,” he said.

Dong and colleagues investigated whether HIV/HCV coinfection conferred an increased risk for osteoporosis and fractures compared with HIV monoinfection or controls uninfected with HIV or HCV. They reviewed data for tens of thousands of patients from 15 studies conducted in the United States, Europe and Taiwan.

Independent associations with osteoporosis were reported for many factors, including HIV/HCV coinfection, older age, lower BMI, postmenopausal status and longer duration of therapy with an HIV protease inhibitor, according to the results.

“Low BMD is a recognized metabolic complication of both HIV and chronic HCV infection,” Lo Re said. He added that BMD further decreases 2% to 6% during the initial 2 years of antiretroviral therapy. “Each of these chronic infections has been associated with an increased risk for fracture compared with uninfected individuals.”

“Rates of hip fracture have also been shown to be significantly higher in HIV/HCV-coinfected [persons] compared with HIV-monoinfected, HCV-monoinfected, and uninfected persons,” he said.

Although there is little doubt that there is significant crossover in HIV and HCV populations in terms of the aforementioned lifestyle factors such as smoking, poor nutrition and drug and alcohol use, how those factors affect bone loss and fractures remains unclear.

Lo Re took this one step further. “We need to look at how illicit drug use, alcohol abuse, poor nutrition and fragility among HCV-infected patients might also contribute to increased fracture risk from trauma, irrespective of the impact of HCV infection on BMD,” he said. “Additional research is needed to determine the mechanisms by which chronic HCV and HIV/HCV coinfection affect BMD and fracture incidence.”

Dong and colleagues concluded that DXA screening should be considered for individuals aged 50 years with HIV/HCV coinfection.

Brown supported DXA screening in younger populations with particular risk factors. “This is certainly a good idea if other risk factors besides HCV are present, including HIV in men and women,” he said. “But there is probably enough evidence now to suggest that HCV should be considered a risk factor and prompt screening in the youngest of the older population, including men aged 50 to 70 years and post-menopausal women younger than 65 years.” 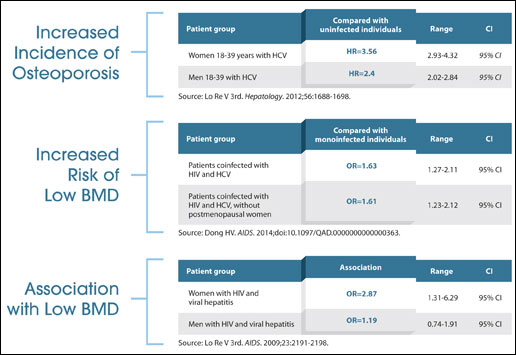 The most important risk factor for osteoporotic fracture is age, according to Brown. “Since osteoporosis is generally a silent disease until there is a fracture, screening is worthwhile in people with increased risk,” he said.

Bedimo also is in favor of increased use of DXA scanning. “In our cohort of HCV-monoinfected patients, we saw a 50% prevalence of osteopenia in patients older than 40 years,” he said. “Of course, people with HCV tend to be in the [baby boomer] birth cohort, but there is a new crop of patients coming along on the heels of that cohort, and we need to stop bone loss before it starts.”

Lo Re suggested that future studies are needed to determine the relations between DXA estimates of BMD and fracture risks associated with HCV monoinfection and HCV/HIV coinfection, and to develop guidelines for the identification of patients at risk.

There is a “dire need” for guidelines to manage this complex patient population, according to Bedimo. “We as a community should come up with a guideline even if the data are not completely clear,” he said. “Guidelines will increase awareness, because not enough clinicians know that HCV is associated with increased osteoporosis incidence.”

Brown agreed that population-specific guidelines are indeed important as they assist with management of these complex patients, and alert practitioners to the problem.

“Once osteoporosis is identified, we generally follow the algorithms that are set up for the general population,” he said. “We evaluate and eliminate secondary causes of low BMD and treat them with the same kind of therapies.”

Lo Re agreed. “After identifying osteoporosis, a case-finding strategy can be undertaken by the person treating the HCV,” he said. “They can be managed like any other patient with low BMD. A PCP can certainly manage the osteoporosis and initiate therapy. If necessary, referral to an endocrinologist who specializes in metabolic bone disease can be considered. It is important that these specialists work together to ensure that the patients are cared for.”

In the absence of guidelines, Bedimo offered some other advice for clinicians. “We all need to be more proactive in limiting other factors that might impact bone health, such as smoking, alcohol use, nutrition and steroid use,” he said. “These are correctable behaviors, but they can’t be corrected if you don’t look for them.”

The clinical community should also be more aware of the effects of vitamin D and bisphosphonates, according to Bedimo. “We don’t know enough about whether they are safe,” he said.

Moving forward, researchers should begin investigating the extent to which novel DAA therapies affect bone health. “Another way to talk about the mechanism has to do with treatment,” Bedimo said. “If you clear your HCV, will you reverse the trends in bone loss? We are working on that now.”

Lo Re agreed that there are limited data on this issue.

“That’s where we are now,” Brown said. “With effective HCV treatments, there is an opportunity is to find out if clearing the virus improves BMD. It is a basic scientific concept. One of the best ways to test a causal hypothesis is to take away the factor of interest to see if the endpoint changes.” – Rob Volansky