Online comments may have an effect on vaccination opinion that is equal to or greater than public service announcements from credible organizations, according to recent data.

Researchers from Washington State University enrolled participants in two studies to determine the persuasive influence of different message sources on web users. In the first, 205 participants viewed fabricated public service announcements (PSAs) concerning vaccination that appeared to be sponsored by the CDC or the National Vaccine Information Council, followed by posts from fictitious online commenters expressing pro- or anti-vaccination stances.

In the second study, 272 participants viewed the same PSAs, but were told the accompanying comments came from an English literature student, a health care lobbyist or an infectious disease and vaccinology doctor so that participants could determine whether or not they believed a commenter to be credible.

Questionnaires were distributed after each design to determine a participant’s willingness to vaccinate themselves and their family members, along with their opinions on vaccination.

“It is well established in the advertising/communications literature that many forms of media-delivered messages and consumer-generated communications are capable of shaping public opinion on a variety of issues,” the researchers wrote. “The current investigation extends this literature in a health-related context by examining the role played by perceived source credibility in moderating the effects of PSAs and online comments on consumer’s attitudes and behavioral intentions.” 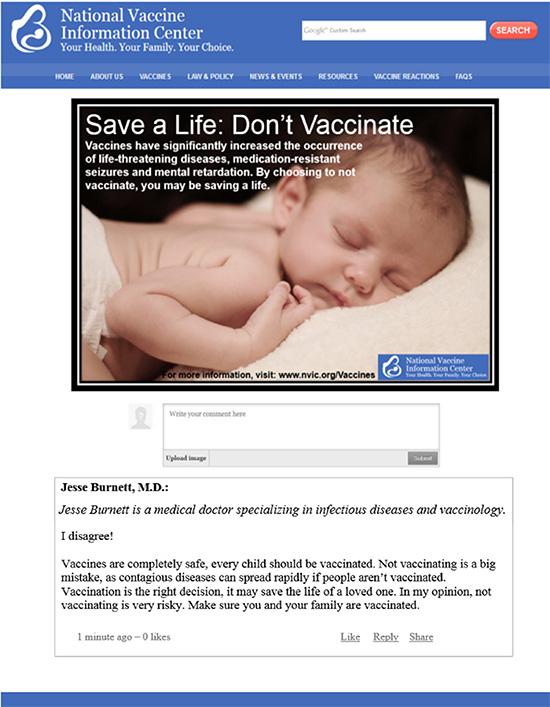 Researchers found that participants were just as influenced by PSAs from credible sources as they were by online commenters whose expertise on the topic was unidentified. This effect was observed both in respondents’ attitudes toward vaccination and their behavioral intentions to vaccinate themselves or their families.

When these commenters were identified as knowledgeable or credible, however, respondent surveys indicated a greater effect than the PSAs. In addition to this independent effect, comments seen as credible also strengthened like-minded PSAs and resulted in greater attitude and behavior effectiveness.

The researchers wrote that health organizations should recognize the impact of electronic word-of-mouth communications when delivering a desired message.

“Our findings suggest that social advertisers must be strategic and vigilant in their management of online health communications,” the investigators wrote. “Given that the perceived credibility of both the PSA sponsor and the online comments were shown to influence consumers’ attitudes and intentions in our studies, it is imperative that social advertisers’ attempts to persuade are not perceived by readers as being manipulative or disingenuous. As such, while welcoming open discourse of relevant topics, health advertisers must monitor and ‘manage’ online comments posted in response to their messages.”