The National Science Foundation recently awarded a $200,000 grant to engineers at Oregon State University to continue their work on new technology that can be used to treat and prevent sepsis, according to a press release.

The OSU engineers have developed a small processor — approximately the size of a coffee mug — which uses microchannel technology to remove circulating bacteria and endotoxins from blood. The same technology is currently being studied in heat exchangers, solar energy and other applications. The approach may offer an alternative to antibiotics, which are not always effective against sepsis.

“More work remains to be done, and the support from the National Science Foundation will be instrumental in that,” Adam Higgins, PhD, principal investigator of the grant and assistant professor at the OSU School of Chemical, Biological and Environmental Engineering, said in the press release. “When complete, we believe this technology will treat sepsis effectively at low cost, or even prevent it when used as a prophylactic treatment.”

Thousands of microchannels in the device are coated in what the engineers call “pendant polymer brushes,” which are composed of repeating chains of carbon and oxygen atoms anchored to the surface. According to the engineers, this prevents blood proteins and cells from sticking to the surface or coagulating. A peptide is located at the end of each chain, which binds to endotoxins and removes them from the blood before it is transferred directly back into the patient. 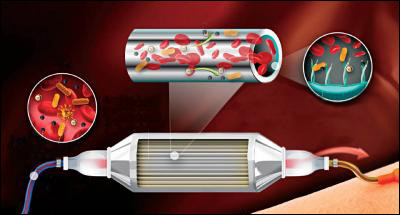 Figure 1. In this graphic image of a device used to prevent sepsis, coatings inside microchannels help remove bacterial fragments and endotoxins in blood.

“This doesn’t just kill bacteria and leave floating fragments behind, it sticks to and removes the circulating bacteria and endotoxin particles that might help trigger a sepsis reaction,” said Karl Schilke, PhD, the OSU Callahan Faculty Scholar in Chemical Engineering.

Schilke said the OSU engineering team wants to make the technology affordable enough to be disposable in the health care setting.

“We hope to emboss the device out of low-cost polymers, so it should be inexpensive enough that it can be used once and then discarded,” he said. “The low cost would also allow treatment even before sepsis is apparent. Anytime there’s a concern about sepsis developing — due to an injury, a wound, an operation, or an infection — you could get ahead of the problem.”

Recent findings suggest that sepsis accounts for one in every two to three hospital deaths. Inflammation associated with the infection can quickly lead to organ failure. It is the most expensive cause of hospitalizations in the United States.

“A big part of the problem with sepsis is that it moves so rapidly,” Joe McGuire, professor and head of the OSU department of chemical, biological and environmental engineering, said in the release. “By the time it’s apparent what the problem is, it’s often too late to treat it.”