Read Next
12 min read
Save

Current Concepts on the Patient with HCV and Cryoglobulinemia

Among HCV-infected patients, 75% develop chronicity, which can lead to cirrhosis and hepatocellular carcinoma. The binding and replication of HCV in extra-hepatic sites, particularly lymphoid tissues and subsequent immune system modulation, is fundamental to the extra-hepatic manifestations of HCV infection such as mixed cryoglobulinemia, porphyria cutanea tarda, sicca syndrome, lichen planus and idiopathic thrombocytopenic purpura.

Risk factors associated with the development of extra-hepatic manifestations in HCV infection include advanced age, degree of liver fibrosis and female sex. Cryoglobulinemic vasculitis in the setting of HCV can result in excess morbidity from end-organ dysfunction of the kidney, peripheral nervous system or clonal B-cell expansion leading to non-Hodgkin’s lymphomas.

The Brouet classification groups cryoglobulinemia into three types. Type I (10% to 15% of cases) comprises single monoclonal immunoglobulins and is invariably associated with lymphoproliferative diseases. Type II comprises a mixture of polyclonal IgG and monoclonal IgM. Type III is made up of polyclonal IgG or IgM. Types II and III are collectively referred to as mixed cryoglobulinemia and account for 50% to 60% and 30% to 40% of cryoglobulin cases, respectively.

The Immunopathogenesis of Cryoglobulinemia in HCV

HCV modulates B- and T-lymphocyte function causing polyclonal activation and proliferation of B lymphocytes. Clonal expansion of B cells producing immunoglobulins with rheumatoid factor activity is the immunopathological hallmark of cryoglobulinemia. In HCV-infected patients, clonal B-cell expansion is seen in intrahepatic lymphocyte infiltrates, lymphoid organs and bone marrow. A decrease in clearance of circulating immune complexes, due to hepatic and renal dysfunction, results in elevated levels of serum cryoglobulins seen in HCV infection.

The “Meltzer’s triad” of palpable purpura, arthralgias and myalgias is the hallmark clinical manifestation of cryoglobulinemic vasculitis.

Cutaneous manifestations. Cutaneous manifestations in cryoglobulinemic vasculitis have a predisposition to dependent areas of the body. Erythematous macules and papules, skin ulcerations, livedo reticularis, Raynaud’s phenomenon and nail fold capillary changes, such as neo-angiogenesis and tortuosity, are common findings.

Renal involvement. Type I membranoproliferative glomerulonephritis is the most common renal manifestation in cryoglobulinemic vasculitis. In a study by Roccatello and colleagues of 146 patients with cryoglobulinemic glomerulonephritis, type II cryoglobulins were detected in 75% of patients. Age at diagnosis, elevated baseline serum creatinine levels and proteinuria independently predicted the severity of renal failure on subsequent follow-up. Survival estimates were unaffected by HCV status or sex, and the most common cause of mortality was cardiovascular events (60%).

Rheumatologic manifestations. The most common rheumatologic manifestations of HCV-related cryoglobulinemia include arthralgias, rheumatoid factor and anti-nuclear antibody positivity, and autoimmune destruction of lacrimal/salivary glands causing dry eyes and dry mouth (sicca syndrome). Interestingly, the incidence of these symptoms has not been shown to be dependent on cryoglobulin positivity.

The diagnosis of HCV-associated cryoglobulinemic vasculitis is usually derived from a combination of history, physical examination and laboratory studies. Systemic complaints of arthralgias, neuropathy or characteristic rash should prompt further evaluation. Laboratory elements that guide the diagnosis are rheumatoid factor positivity without evidence of rheumatoid arthritis (ie, a negative anti-cyclic citrullinated peptide antibody or stigmata of rheumatic disease on exam). Many HCV-infected patients with cryoglobulinemia are misdiagnosed with rheumatoid arthritis due to rheumatoid factor positivity. We advocate that all HCV-infected patients be screened for cryoglobulinemia by testing for rheumatoid factor as a part of the baseline evaluation (see Figure 1). 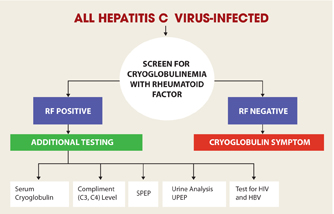 Subsequent serum cryoglobulin testing can be falsely negative due to technical difficulties, inadequate sample handling and the presence of concomitant renal disease. A positive rheumatoid factor and low serum complement levels are highly suggestive of cryoglobulinemic vasculitis. Urine analysis also is an essential component of the workup to assess for active sediment, hematuria and proteinuria. Tissue biopsy can be confirmatory (skin or renal), but is often not required except in those cases where the diagnosis is elusive or in the case of active renal disease.

Treatment of mixed cryoglobulinemia has changed in the past 2 decades from its initial recognition as a low-grade lymphomatous malignancy to an HCV-associated disease. In the pre-interferon era, mixed cryoglobulinemia was treated by combination therapy using high-dose steroids and cytotoxic therapy, with or without plasmapheresis, in life-threatening emergencies.

The current principles of treatment for mixed cryoglobulinemia essentially target the viral trigger, the downstream B-cell clonal proliferation, or both simultaneously. The choice of therapy depends on the clinical manifestations and on the severity of the cryoglobulinemic symptoms (see Figure 2). 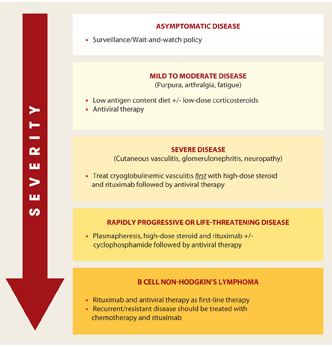 Interferon-based therapy. Interferon was shown to be highly effective in treating mixed cryoglobulinemia even before its identification as an HCV-related disorder, according to study results by Bonomo and colleagues published in 1987. Interferon alfa-2a as monotherapy achieved a combined response rate (complete and partial) of 77% in symptomatic mixed cryoglobulinemia when used for a duration of 6 months in a study conducted by Casato and colleagues published in 1991. A complete response was defined as disappearance of all vasculitic symptoms and a reduction of the cryocrit to less than 10% of the initial value. A partial response was defined as the disappearance of all symptoms, but the cryocrit remained above 10% of the initial value.

Interferon therapy in patients with HCV-associated cryoglobulinemic vasculitis can lead to an initial worsening of the vasculitic symptoms and could be life-threatening. This paradoxical worsening is attributed to changes in the levels of B-cell specific cytokines with interferon stimulation. In one study by Lake-Bakaar and colleagues, serum B–cell-activating factor (BAFF) levels increased threefold after an initial drop on day 7 in patients with HCV after interferon administration. Due to the potential for worsening of vasculitic symptoms in patients with severe HCV-associated cryoglobulinemic vasculitis, it is recommended that antiviral therapy for HCV be delayed for 2 to 4 months while therapy with plasmapheresis, steroids and either cyclophosphamide or rituximab (Rituxan, Genentech/Idec) is initiated first.

The presence of cryoglobulinemia can negatively affect SVR rates during HCV therapy. In a multicenter, open-label study on the efficacy of pegylated interferon alfa-2b plus ribavirin in HCV-infected patients with active cryoglobulinemic vasculitis (n=86), low SVR rates were noted across all genotypes. The SVR rates in genotypes 2 and 3 with 24 weeks of treatment were 64%, whereas genotypes 1 and 4 had SVR rates of 36% with 48 weeks of treatment, according to findings by Mazzaro and colleagues. In the same study, pegylated interferon and ribavirin therapy achieved complete and persistent recovery from cryoglobulinemic symptoms in 89% of HCV-infected patients.

A major factor predicting SVR in interferon therapy is a single nucleotide polymorphism near the IL28B gene. Three IL28B genotypes have been identified: C/C, C/T and T/T. The C/C genotype mounts a stronger immune response to HCV and has been associated with spontaneous viral clearance. A recent prospective study by Sansonno and colleagues in HCV patients with (n=159) and without (n=172) cryoglobulinemic vasculitis demonstrated that the IL28B gene region also predicts the potential development of cryoglobulinemic vasculitis in patients with HCV. In the same study, the T/T genotype was more common in patients who developed vasculitis when compared with non-T/T genotypes (17% vs. 8.1%; P=.02) whereas the C/C genotype in HCV-associated cryoglobulinemic vasculitis, despite an independent predictor for improved SVR, was associated with increased risk for nephropathy (21%; P=.003) and B-cell malignancies (17.5%; P=.048).

Direct-acting antiviral agents (DAAs). Use of pegylated interferon combined with ribavirin and an HCV protease inhibitor, such as telaprevir (Incivek, Vertex) or boceprevir (Victrelis, Merck), emerged as the standard of care in 2011 with substantial increases in SVR rates. A recent study by Saadoun and colleagues that assessed the safety and efficacy of treatment with pegylated interferon alfa (2a or b) plus ribavirin combined with telaprevir (375 mg three times daily for 12 weeks; n=15) or boceprevir (800 mg three times daily for 44 weeks; n=8) among patients with HCV-associated cryoglobulinemic vasculitis demonstrated overall viral negativity among 69.6% of patients at week 24 of therapy. Complete clinical response for cryoglobulinemic symptoms was reported in 56.5% of patients, and partial responses in 43.5%. Combined grade 3 and 4 adverse effects, including anemia and thrombocytopenia in 43.5% (n=10) of patients, however, complicated therapy utilizing protease inhibitors.

Last year, a second-generation protease inhibitor, simeprevir (Olysio, Janssen Therapeutics), was approved for use among genotype 1-infected patients. The polymerase inhibitor sofosbuvir (Sovaldi, Gilead) also was approved for use in patients with genotype 1 through 6. Sofosbuvir is indicated together with ribavirin for the treatment of genotype 2 and 3 infection without interferon. As interferon has the potential to exacerbate vasculitic disease, use of an interferon-free regimen for the treatment of HCV offers a favorable option for individuals with HCV-associated cryoglobulinemic vasculitis. However, further study of the efficacy of these new agents among patients with HCV-associated cryoglobulinemic vasculitis is needed.

Rituximab. Rituximab is a first-generation chimeric monoclonal antibody against the CD20 glycoprotein found on B lymphocytes. In a prospective cohort study by Saadoun and colleagues of 38 patients with HCV-associated mixed cryoglobulinemia, utilization of rituximab for 4 weeks before therapy with pegylated interferon alfa-2a and ribavirin for 48 weeks compared with pegylated interferon and ribavirin alone resulted in shorter time to clinical remission, improved cryoglobulin clearance and similar SVR rates.

Sneller and colleagues conducted a study of patients who failed to achieve remission of cryoglobulinemic vasculitis with antiviral therapy in whom rituximab was found to be effective. Patients were randomly assigned to four weekly doses of rituximab vs. maintenance or immunosuppressive therapy. At 6 months, 83% of patients in the rituximab group achieved remission compared with 8% in the control group. Remission was maintained for a median duration of 7 months with no adverse effects or changes in HCV viremia.

There is no consensus in the use of rituximab with interferon therapy as first- or second-line therapy in HCV-associated cryoglobulinemic vasculitis. To date, there are no guidelines for its use as sequential or combination therapy. In general, rituximab is combined with antiviral therapy for severe/life-threatening or resistant disease.

There is a paradigm shift in the care of HCV patients with new screening guidelines advocating for one-time HCV screening of all individuals born between 1945 and 1965. Simultaneously, promising interferon-free, all-oral regimens with improved SVR rates across all genotypes should soon be widely available. Newer oral agents may provide improved cryoglobulinemic symptom control as compared with interferon-based regimens, which have the potential to exacerbate vasculitic symptoms.