The CDC is unambiguous in its recommendation regarding HCV screening for the baby boomer generation: All individuals born between 1945 and 1965 are encouraged to receive a one-time routine screening for the infection. 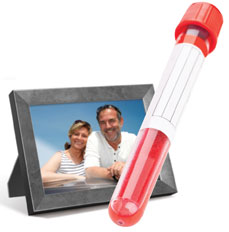 “A one-time blood test for hepatitis C should be on every baby boomer’s medical checklist,” CDC director Thomas R. Frieden, MD, MPH, stated in a recent press release. “The new recommendations can protect the health of an entire generation of Americans and save thousands of lives.”

Following the CDC’s recommendation, in June 2013 the US Preventive Services Task Force issued a final statement on screening for HCV in adults, with a grade B recommendation of one-time HCV screening for all baby boomers and others at risk for infection including those who currently use injection drugs or have in the past, as well as those who received a blood transfusion before 1992. Their recommendation applies to all asymptomatic adults without known liver disease or functional abnormalities. The Task Force further notes that screening should be voluntary and, before screening, patients should receive an explanation of HCV infection and the meaning of positive and negative test results, an opportunity to ask questions and a chance to decline testing.

As many as one in 30 baby boomers may have HCV and are unaware. A one-time screening test could identify more than 800,000 additional baby boomers who have the virus, according to CDC estimates. Screening could save more than 120,000 lives.

Bryce D. Smith, PhD, cited more sobering figures in an interview with HCV Next. He estimates that approximately 3 million people in the United States have chronic HCV, of whom 75% are baby boomers. “This is where the majority of HCV is — the baby boomers,” said Smith, lead health scientist in the CDC’s division of viral hepatitis.

However, uptake of the recommended screening protocol remains sluggish, perhaps because ongoing arguments have been made that support continuing with the risk-based approach to screening established in a 1998 document published by the CDC.

Although screening is recommended for all individuals in the baby boomer age group, identifying potential patients through risk profiling remains a relevant issue, according to Jim Galbraith, MD, associate professor in the department of emergency medicine at University of Alabama at Birmingham.

“Even with electronic health records, it is still a challenge for providers to identify who is in need of this one-time screening test,” Galbraith said in an interview. “Many patients identified with HCV infection have self-reported no prior risks. One of the greatest risk factors, injection drug use, is highly stigmatized. This leads to underreporting by patients and is not always inquired about by medical providers.”

Other risk factors outlined by the CDC include use of injection drugs more than 2 decades ago, blood transfusion before 1992, elevation of liver enzymes, history of dialysis and HIV. Many of these risk factors go unreported or underreported, according to Galbraith. “More than 10 years of a risk-based approach failed to identify a sufficient number of infections,” he said.

For Smith, if it were possible to fully implement risk-based screening strategies, that approach could, conceivably, be effective. “If every clinician knew enough about HCV, its sequelae and its treatments, and actually solicited risk information, that strategy would be preferable,” he said. “But that is just not the case. Some clinicians don’t know the risk factors. We see patients with injection drug use in their history but who have never had an HCV test.”

Galbraith added a more technical component to his argument.

“Programming of [electronic health records] to prompt physicians to recommend the test for eligible individuals would likely result in a substantial increase in testing rates,” he said. “National campaigns aimed at increasing the baby boomer population’s awareness of HCV infection may also prompt some individuals to seek a test from their physician. Ultimately, individuals may not perceive themselves at risk unless the screening test is recommended by their physician.”

It is for these reasons that Galbraith was unequivocal in his support of the CDC’s 2012 guidelines. “Due to the shortcomings of risk-based screening and the new urgency to identify and provide treatment for the aging baby boomer population, this broad screening recommendation will afford the best chance to reduce downstream morbidity and mortality,” he said.

These issues prompted Galbraith and colleagues to conduct an opt-out HCV-screening model for a cohort of individuals born between 1945 and 1965. Eligible participants completed a questionnaire and underwent screening using the Abbott ARCHITECT i1000 assay. 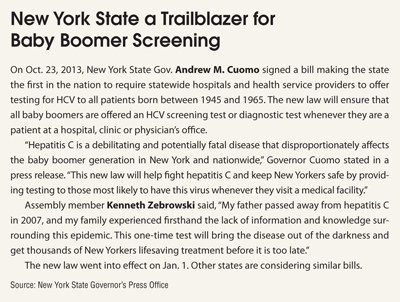 Nearly 900 baby boomers were tested in the first 15 days, 565 of whom met eligibility criteria for testing. Reactivity was reported in 12% of the cohort. Forty of 56 positive tests (71.4%) were confirmed for HCV viremia by polymerase chain reaction. Men were more likely than women to test positive, as were uninsured or underinsured individuals compared with patients who had insurance. Black and white patients demonstrated similar rates of reactivity.

“In this preliminary effort, we identified a high prevalence of chronic HCV infection among previously unaware baby boomers, with approximately one of every eight screened ED patients exhibiting positive reactivity,” the researchers concluded, adding that the findings suggest the ED may be a valuable setting for HCV screening.

Other research presented in November at The Liver Meeting 2013 support the recent recommendations to screen baby boomers for HCV. Investigators at the Department of Veterans Affairs studied the health records of more than 5.5 million US veterans. Of those, 64.2% of baby boomers and 54.7% overall — or more than 2 million — had at least one VA screening for HCV. Of those screened, 9.9% of the baby boomers had HCV infection compared with 1.7% of those born before 1945 and 1.1% of those born after 1965. After extrapolating the data to veterans not yet screened, the investigators concluded that up to 51,000 more veterans of the baby boomer generation could be identified with HCV, according to a press release.

“Our work should serve as an example to other health care organizations to prompt them to assess their own HCV screening rates and HCV prevalence rates and to make such rates public. Sharing this type of information would give public health officials better information about the prevalence of HCV in the US and would give the general public more information for making health care decisions,” Lisa I. Backus, MD, PhD, an investigator for the trial from the Veterans Health Administration in Palo Alto, Calif., stated in the release.

There are large populations of baby boomer individuals who will remain a challenge, Galbraith said. “Traditionally, underserved populations, including the uninsured and those with publicly funded insurance, have been shown to have disproportionately high rates of HCV infection compared with the general population. These populations can be difficult to screen, owing to the costs of screening/confirmatory RNA tests as well as the challenge of obtaining follow-up HCV care. The greatest benefit of screening will be lost when these individuals are not afforded treatment.”

Smith also highlighted alcohol use as a complicating factor. “For people found to be positive, we recommend an alcohol use assessment as alcohol accelerates the progression of liver disease,” he said. “There are a number of brief interventions that have been proven to be effective in helping patients to reduce and even stop their alcohol use.”

Despite the overarching recommendations, some evidence suggests that clinicians are not following protocols.

Gupta and colleagues retrospectively reviewed charts for 1,578 individuals born between 1945 and 1964 who were treated at two outpatient primary care centers. They aimed to determine the proportion of individuals who had been screened for HCV and whether anti-HCV antibody or HCV RNA testing was used. The analysis included 569 men and 1,009 women with a mean age of 56 years.

The screening rate was 2%, with only 21 men and 10 women receiving screening. The mean age of individuals who were screened was 57 years. One patient was screened with RNA testing and the other 30 underwent the anti-HCV antibody method. Four screened patients (13%) tested positive for HCV.

The investigators encouraged increased education about HCV testing for patients and the clinical community. They suggested that HCV specialists visit hospitals and provide instruction along with radio advertisements and posters in health care settings.

“There are likely many reasons why the uptake has been sluggish,” Galbraith said. “Similar results were seen initially with the updated HIV screening recommendations of 2006. The costs of screening, stigma and fear of discussing HCV by patients and providers, lack of education by providers regarding current HCV treatment successes, and lack of available follow-up care certainly would be contributing factors.”

Smith, however, suggested that it may just be a matter of time. “When we make a vaccine-related recommendation, it does not go out to everyone in the target population within the first couple of years,” he said. “It frequently requires years to take hold.”

Clinicians need time to review guidelines and determine how to integrate them into practice, according to Smith.

“At this point, we have two very strong recommendations,” Smith said. “When the USPSTF recommends something, it usually ensures insurance coverage. This suggests that we can expect increasing adoption over time. It just takes a little time and we are working to quicken that process.”

In March, the Centers for Medicare & Medicaid Services issued a proposed decision memo stating that evidence is adequate to conclude that HCV screening is reasonable and necessary and is appropriate for individuals entitled to benefits under Part A or enrolled under Part B. In the memo, CMS proposes HCV screening coverage for adults at high risk for HCV infection, and repeat screening annually only for those who have had continued illicit injection drug use since the prior negative screening test. CMS also proposes a single screening test covered for adults who do not meet the definition of high risk, but were born from 1945 through 1965. As of press time, CMS was seeking comments on the proposed decision memo. A final decision memorandum is anticipated in June.

“Implementation of these recommendations will be most successful if a multipronged approach is used: Education for providers and the public through the Know More Hepatitis campaign, integration of HCV screening in electronic medical records systems, and working in concert with partners such as providers, public health professionals, health plans and payers, and laboratories and other federal agencies,” Smith said.

He also echoed the conclusions drawn by Gupta and colleagues. “What we are trying to do from our end is improve education of the general public and practitioners to help them understand what HCV is, what the recommendation is, and that the CDC and USPSTF have made recommendations,” he said. “Early focus groups show that a lot of primary care doctors do not even know about this. Over time, we will see more and more people adopting the recommendation.” — by Rob Volansky