The Challenge of Pregnancy in HCV Infection

Hepatitis C virus infection in the United States affects 5.2 million individuals and is the most common bloodborne infection, surpassing both HIV (1.1 million) and hepatitis B virus (804,000-1.4 million).

Most HCV cases in the developed world are spread by injection drug use. Other risk factors include a history of blood transfusion or organ donation before 1992; tattooing or body piercing with unsterile equipment; needle-stick accidents; infants born to HCV-infected mothers; and high-risk sexual behavior. Of those who are acutely infected, approximately 20% clear the virus spontaneously, usually 2 to 4 months after viral exposure, whereas the remainder develops chronic HCV infection marked by normal to elevated alanine aminotransferase (ALT) levels. In chronic HCV, the immune system is frequently dysregulated; instead of clearing the virus, it can lead to progressive fibrosis accumulation, ultimately slowly promoting the progression toward cirrhosis and/or hepatocellular carcinoma.

Acute HCV has become a disease of the younger population, probably due to a high frequency of injection drug use. In 2011, the CDC reported that those aged 20 to 29 years have the highest prevalence of acute HCV infection. Because the mean age of a US woman at the time of first birth is about 25.4 years, a significant number of pregnant women may have acute HCV infection at the time of their pregnancy. Among pregnant women, chronic HCV infection remains more common than acute HCV infection. Since pregnancy modifies host–virus interactions, it is crucial to understand clinical manifestations of the infection and its effect on the overall magnitude of the disease, its diagnosis and its management. Physicians should also understand the effect of pregnancy on HCV immunity and appreciate the factors that influence mother-to-child viral transmission.

Until recently, screening guidelines in the United States only recommended screening at-risk individuals with a history of a single exposure to injection drugs. However, the recommendation was unsuccessful because three-fourths of such individuals are unaware of their status. In 2012, revised CDC guidelines recommended one-time testing for HCV seropositivity for all adults born from 1945 to 1965 without prior ascertainment of HCV risk, after realization that most of those who were unaware of their HCV diagnosis were born during this period.

An argument for universal HCV screening over a risk-based approach in pregnant women is substantiated because approximately 40% with HCV infection are initially reluctant to report major risk factors and physicians may be hesitant to ask about drug use. Pregnant women with signs of acute or chronic liver disease, when the etiology is unknown, are also recommended to undergo HCV screening. In summary, risk-based screening fails to diagnose a significant number of HCV-infected infants, leading to underreporting of the true prevalence of the infection.

HCV seropositivity in pregnant women should be confirmed by an HCV RNA test, followed by discussions regarding the risk for mother-to-child transmission, prognosis, course of the disease, treatment options with recommendations, neonatal management and follow-up testing. Screening of babies of HCV RNA-positive mothers with HCV antibodies should not be performed until age 18 months to avoid false-positive results due to passive transfer of maternal antibodies, although HCV RNA testing also is an option. However, since HCV-seropositive pregnant mothers with undetectable viremia have been shown to vertically transmit the virus, HCV screening in these situations is suggested. Because the sensitivity of HCV RNA tests in infants is improved after age 6 months, if earlier diagnosis is requested, HCV RNA testing may be performed at age 3 months but should be confirmed at age 6 months.

Pregnancy with HCV and Mother-to-Child Transmission

Effects of pregnancy on HCV: Immunomodulation effect
In nonpregnant individuals, the onset of acute HCV infection triggers an escalation of HCV-specific CD4+ and CD8+ T-cell responses, resulting in decline in HCV RNA. Innate immunity plays a significant antiviral role during acute HCV, but it may be ineffective in viral eradication, leading to chronic persistent viremia. During pregnancy, maternal fetal immune tolerance mechanisms enhance viral replication, leading to increased HCV RNA levels and suppression of immune mediated hepatocellular necrosis that result in decreases in ALT levels during the second and third trimesters. The latter also can result from hemodilution and placental interferon produced during pregnancy. Higher estrogen levels during the third trimester also may lead to a decline in hepatocellular injury and ALT levels. These biochemical markers typically return to baseline during the postpartum period due to immune reconstitution. Estrogen exposure has shown some long-term benefit during the course of the infection and, thus, multiparous women may have slower fibrosis progression.

The effect of pregnancy on the immune response has recently been addressed. During chronic HCV infection, besides T-cell exhaustion, the virus mutates to escape host CD8+ T cells, which has a cost in terms of replicative fitness that results in decreased replication capacity. During pregnancy, some escape mutations are lost, thereby facilitating the emergence of viruses with enhanced replication capacity that are subsequently perinatally transmitted. At childbirth, escape mutations again predominate with a subsequent reduction in viral load.

Effects of HCV on pregnancy
To date, chronic HCV infection has not been implicated in pregnancy-related complications. One study reported that HCV-infected pregnant women may be at increased risk for premature rupture of membranes and excessive weight gain resulting in gestational diabetes. The infants born to these mothers were reported as more likely to have low birth weight, to be small for gestational age, to require assisted ventilation, and to require admission to the ICU. Another study reported a positive association between suspected intrahepatic cholestasis of pregnancy and HCV, although significant biliary inflammation due to the virus may have been a confounding factor.

Maternal-to-child transmission
In the United States, an estimated 40,000 infants are born to HCV-positive women annually, with infection occurring in a mean of 5% of children. Amniotic fluid from pregnant viremic women did not demonstrate detectable HCV RNA, according to a prospective study by Delamare and colleagues published in the Journal of Hepatology in 1999. The one pregnant woman with detectable virus in the amniotic fluid had an anterior placenta, and infection could have resulted from trans-placental amniocentesis. Thus, viral transmission directly through the placenta is the most likely route, and the mode of delivery should not influence vertical transmission in HCV monoinfected women. In a review of multiple studies, no significant difference in the mother-to-child transmission risk was found comparing cesarean section vs. vaginal delivery for HCV monoinfected women. Mast and colleagues found a high risk for mother-to-child transmission with usage of internal fetal monitors (OR=6.7; 95% CI, 1.1-35.9) and with prolonged rupture of membranes, especially longer than 6 hours.

Generally, we focus on diagnoses and treatment of chronic HCV because acute HCV during pregnancy is usually silent and may rarely present with jaundice. In the case of any pregnancy with jaundice, the differential diagnosis should include intrahepatic cholestasis of pregnancy, HELLP syndrome (hemolysis, elevated liver enzymes and thrombocytopenia) and acute fatty liver of pregnancy along with other non-pregnancy-associated causes of jaundice. However, any clinical suspicion of HCV infection should always be confirmed by biochemical markers (anti-HCV, HCV RNA, and aminotransferase levels).

Once the diagnosis is confirmed, further steps in the management must be discussed. HCV-infected pregnant patients should be advised to avoid alcohol and other potentially hepatotoxic agents. Aminotransferase levels and tests for liver synthetic function should be monitored. Invasive birth-assisting procedures, such as forceps and scalp electrodes, that can lead to maternal fetal blood contact during delivery can increase the risk of mother-to-child transmission; these should be avoided unless clinically indicated (See Figure). 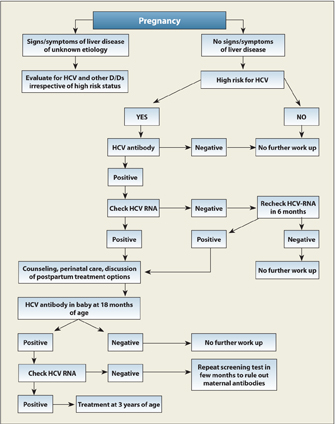 Figure: An overview of the approach to pregnant women with HCV.

Questioning the Need for Treatment

For acute HCV in nonpregnant individuals, treatment has generally been recommended with viral eradication occurring in more than 85%. Nevertheless, pregnancy requires a different strategy, starting with a discussion of the risks vs. benefits of HCV treatment during pregnancy. Usually, acute HCV in pregnancy does not carry significant adverse outcomes except for few case reports of premature delivery, whereas HCV treatment during pregnancy is contraindicated. Hence, treatment of acute HCV in this population is not recommended. These patients should be educated regarding the possibility of spontaneous resolution of the infection and that chronic HCV infection is a slowly progressive disease with effective treatments for both children and adults. Patients should also be informed that interferon is an FDA category C drug. Although it has been associated with teratogenicity in animals, controlled studies in pregnant humans have not been performed. The psychiatric and other constitutional adverse effects of interferon should also be disclosed. In the case of inadvertent exposure to interferon, pregnant women should be encouraged to continue pregnancy with close monitoring. Ribavirin, because of its teratogenic potential, should be avoided entirely during pregnancy. Additionally, treatment initiation after delivery enables the pregnant mother to focus more attention on the baby during the perinatal period.

Treatment during the postpartum period accrues many potential benefits. Drug regimens that include those rated as category X, ribavirin and new direct-acting antivirals with efficacy of more than 90% could be prescribed. The rebound in the immune response during the postpartum period also may have a beneficial synergistic effect on treatment outcomes. Chronic HCV-infected patients requesting treatment before pregnancy should be counseled to cease high-risk behaviors and those that predispose to reinfection such as injection drug use. All patients should also agree to use at least two effective birth control methods until 6 months after completion of antiviral therapy.

Spontaneous viral clearance of perinatal HCV infection has been associated with the presence of CC interleukin-28B host genotype in perinatally HCV-infected infants and usually occurs by age 3 years, especially in those with HCV genotype 3 infection. Thus, HCV RNA-positive children who acquired the infection during pregnancy should be treated if the infection persists after they attain age 3 years.

The rapid advances in HCV therapeutics have definitely changed the approach to treatment of chronic HCV infection. Given the slow rate of disease progression, treatment initiation can be postponed in most pregnant women until the postpartum period.