Antibiotic resistance is a health care concern that has been recognized since the invention of antibiotics. In 1945, Alexander Fleming himself warned against the overuse of penicillin and asked that it stopped being overprescribed. Yet, even today we continue this same message of stopping the unnecessary use of antibiotics.

International efforts to confront this public health crisis have been spearheaded by initiatives such as the “10 x ’20 Initiative” launched by the IDSA, and the Generating Antibiotics Incentives Now (GAIN) Act, which was passed by Congress in 2012. The most recent update on the 10 x ’20 Initiative highlighted drugs that are active against multidrug-resistant gram-negative bacilli (MDR-GNB). This update coincides with the release of the CDC report, “Antibiotic Resistance Threats in the United States, 2013,” which characterized the threat level from carbapenem-resistant Enterobacteriaceae (CRE) as urgent, requiring immediate and aggressive action. Unfortunately, data from the IDSA 10 x ‘20 Initiative paints a grim picture of the future of new antibiotic development.

According to the most recent update from the IDSA regarding the antibiotic pipeline, there are only seven compounds that target gram-negative pathogens in phase 2 or phase 3 trials (Table 1). Even more concerning is that only three of the compounds could be considered “novel.” The remaining agents in development are new compounds in already established classes.

The novel compounds include the new beta-lactamase inhibitors avibactam (Forest Laboratories) and MK-7655 (Merck), as well as the peptide mimetic brilacidin (Cellceutix). Avibactam is a non-beta-lactam, beta-lactamase inhibitor that is being studied in combination with ceftazidime and ceftaroline (Teflaro, Forest Laboratories). Avibactam is a potent inhibitor of Amber class A and C beta-lactamases, as well as some class D beta-lactamases. Clinically, this translates to an ability to extend coverage to extended-spectrum beta-lactamase (ESBL) and Klebsiella pneumoniae carbapenemase (KPC)-producing bacteria. In addition, current pharmacokinetic and safety data suggest that the addition of avibactam does not necessitate dosing changes beyond those of the active drug alone.

Brilacidin is described as a peptide mimetic. It exerts antimicrobial effects by disrupting bacterial membranes. Brilacidin belongs to a new class of antibiotics the manufacturer has dubbed defensin-mimetics. Defensin-mimetics are designed to function similarly to existing host proteins called defensins. This novel mechanism translates to broad gram-positive and gram-negative activity. Current data on brilacidin show activity against ESBLs, and the manufacturer suggests activity against methicillin-resistant Staphylococcus aureus, Enterococcus faecium and NDM-1-producing K. pneumoniae. At this time, there is insufficient data regarding brilacidin’s coverage of Pseudomonas.

In addition, brilacidin has no activity against Acinetobacter baumannii. Recently, a phase 2 trial was completed that compared brilacidin with daptomycin for the treatment of acute bacterial skin and skin structure infections. Brilacidin met all objectives of efficacy and safety in this study. Of note, 65% to 87% of patients in the phase 2 trial experienced adverse events of numbness and tingling. The significance of this is unclear at this time, and the manufacturer is moving forward with a phase 2B study of brilacidin.

Currently, the biggest gap in the investigational pipeline are compounds active against A. baumannii. Unfortunately, despite the advancements that these compounds represent, none of the current agents in the pipeline have significant activity against this troublesome pathogen. Clinicians will have to continue to rely on currently available agents, which can be difficult given the increasing prevalence of MDR Acinetobacter infections.

In this setting, there is greater tolerance for overall drug therapy risk because of the lack of therapeutic options. The LPAD pathway will allow antibacterial drug approval in much smaller, more rapid clinical trials, similar to the Orphan Drug Program. Products approved via LPAD would be subsequently restricted to the indicated population. If approved, this new pathway has potential to facilitate innovation and development of new antibacterials. Until then, we will continue to seek other methods to combat antimicrobial resistance. 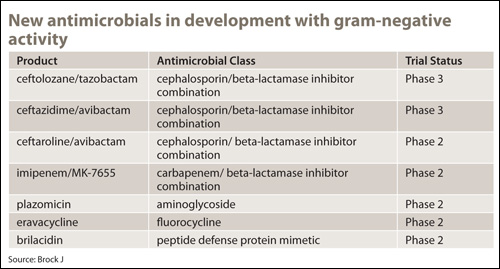 During the closing plenary session at ID Week 2013 in October, Brad Spellberg, MD, spoke about the growing crisis of antibiotic resistance. He said the resistance crisis is the predictable result of how we have managed antibiotics during the past 80 years. “If we are to change our present state, we need to challenge assumptions and think disruptively,” he said. He proposed that development and utilization of multiple new antibiotics in the immediate future may not be the best answer to combat antibiotic resistance.