Rhodococcus equi is an intracellular gram-positive coccobacillus that belongs to the family Nocardioform, orders Actinomycetes.

R. equi is commonly implicated in zoonotic infections in grazing animals and is the most common species found in human infections. The other members of the genus that cause infections in humans include R. rhodochrous, R. fascians and R. erythropolis. The first case of R. equi infection in a human that caused a lung abscess was reported in 1967 in a young man who received corticosteroids and 6-mercaptopurine for autoimmune hepatitis.

Since then, R. equi has become an important pathogen in immunocompromised patients and, in rare instances, has been reported in immunocompetent hosts. Necrotizing pneumonia is the most common site of infection associated with R. equi. Other manifestations include brain abscesses, osteomyelitis and septic arthritis. There have been reports of R. equi bacteremia, with the lungs identified as the primary site. The purpose of this case report is to describe a 73-year-old immunocompetent male with R. equi bacteremia secondary to an infected med port catheter.

A 73-year-old male (weight, 91.2 kg; height, 167.6 cm) with a medical history of diabetes mellitus, congestive heart failure, chronic obstructive pulmonary disease and seborrheic dermatitis presented to the ED complaining of worsening shortness of breath over several weeks. On physical exam, the patient was in no acute distress but was found to be febrile, with an oral temperature of 38.6°C. Routine laboratory workup was done in the ED, and findings were significant for an elevated white blood cell count of 13.1 K/uL and neutrophils of 91.3%. Blood cultures, urine culture, urinalysis and a chest X-ray were obtained, and the patient was admitted to the hospital to rule out a catheter-related infection, as the patient was known to have an indwelling med port catheter. The patient reported that the med port was inserted 2 years before receiving chelating therapy from a local practitioner in the community.

The urinalysis and the chest X-ray that were done in the ED revealed no pertinent findings, and IV vancomycin was started empirically pending the blood culture results. At first, the Gram’s stain on the blood cultures was reported as gram-positive rods in 3/6 bottles and identified as diphtheroides, which subsequently was changed to gram-positive coccobacilli and identified as R. equi.

An infectious disease (ID) consult was requested, and recommendations were made to remove the med port to obtain an HIV test and to get a baseline transthoracic echocardiogram (TTE) and to be followed by a transesophageal echocardiogram (TEE) to rule out endocarditis. The sensitivity results for the pathogen revealed that the organism was sensitive to multiple antibiotics, including amikacin, amoxicillin/clavulanic acid, ceftriaxone, ciprofloxacin, clarithromycin, minocycline, trimethoprim/sulfamethoxazole and tobramycin.

Rhodococcus gram plates will have a yellow or pink pigment.

Although vancomycin was not evaluated in the sensitivity panel, the patient was continued on vancomycin as per ID recommendations for its reported potent activity in the literature against R. equi. The HIV test was negative, the TTE did not reveal any valvular vegetation, and the patient declined a TEE and the removal of the med port. Repeated blood cultures 48 hours after initiation of therapy were sterile, and the patient was discharged to complete additional 2 weeks of IV vancomycin as an outpatient.

Two months after discharge, the patient again presented to the ED complaining of shortness of breath and night sweats of 3 weeks duration. At the ED, blood cultures were obtained and the patient was started on IV vancomycin due to a high suspicion of recurrent catheter-related infection.

The patient was admitted to the hospital for further evaluation. The blood cultures again grew R. equi, despite previous antibiotic therapy. During this admission, a chest X-ray and a TTE were repeated, but no changes were noted when compared with the studies from the previous admission. The patient agreed to have the med port removed, and the med port tip was then sent for culture and sensitivity, and the R. equi was isolated. IV vancomycin therapy was continued for 2 weeks, and subsequent blood cultures after completion of the antibiotic remain sterile at 1-month and 3-month follow-up visits.

R. equi, previously known as Corynebacterium equi, is a facultative, non-motile, non-spore-forming coccobacillus, named Rhodococcus for its ability to produce red- or salmon-colored pigment. The organism is found in horse feces and in soil and has been recognized as a cause of pneumonia in horses since 1923. 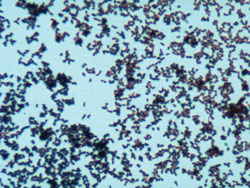 Recently, R. equi bacteremia has been reported in a malnourished 3-year-old female. The patient was initially treated with ceftriaxone, to which the organism turned out to be resistant. Subsequently, the antimicrobial therapy was changed to vancomycin and erythromycin. The patient responded well and recovered. In this case, the source of bacteremia is not discussed, and one may argue that the child’s nutritional status would classify her as immunocompromised.