Areas of US identified as high risk for Lyme disease

Researchers have identified the Northeast, Mid-Atlantic and Upper Midwest of the United States as areas of high infection risk for Lyme disease, according to study results published in the American Journal of Tropical Medicine and Hygiene.

As well as identifying the South as a low infection risk area for Lyme disease, researchers from the Yale School of Public Health in collaboration with Michigan State University, University of Illinois and University of California, Irvine, developed a map illustrating areas where Lyme disease poses a public health risk.

“Better understanding of broad areas of risk can guide public health interventions to areas of higher risk,” Maria A. Diuk-Wasser, PhD, assistant professor of epidemiology at the Yale School of Public Health, told Infectious Disease News. “Given difficulties in diagnosing Lyme disease, clinicians may use this information to help assess how likely it is that a patient has Lyme disease and may affect their recommendation of prophylaxis following a tick bite.”

For the study, researchers sampled 304 sites within the continental United States east of the 100th meridian, an area that encompasses the known distribution of the blacklegged tick Ixodes scapularis, considered the main carrier of the Lyme disease pathogen Borrelia burgdorferi.

Between 2004 and 2007, they employed a spatially stratified random design by overlaying a two-degree sampling grid across the study area, with state parks or other publicly accessible forested areas randomly selected within each grid.

At the close of the study, 5,332 I. scapularis specimen were collected at 94 of the 304 sites (30.1%) sampled from 2004 to 2006, with yearly specimen totals in positive sites ranging from one to 506. Researchers tested 5,328 I. scapularis specimen from 92 of the sites for the presence of B. burgdorferi DNA and identified 1,044 pathogen-positive specimen — an overall infection prevalence of 0.2.

Using the collected data, researchers were able to expand the Lyme disease map to extrapolate areas of clear risk for Lyme disease, including eastern Pennsylvania, Maine, Maryland, northern Virginia, most of Wisconsin, large swaths of northern Minnesota and the northern areas of Illinois. The model was also able to outline areas of “emerging risk” as a result of environmental changes — reforestation, suburbanization and reintroduction of deer — including the Illinois/Indiana border, the New York/Vermont border, southwestern Michigan and eastern North Dakota. 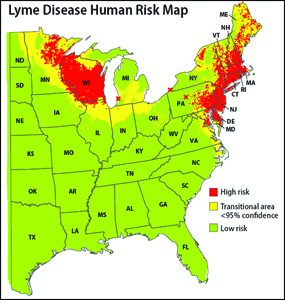 The map that emerged from the tick survey shows a clear risk of Lyme disease in large parts of the Northeast (including eastern Pennsylvania) from Maine going as far south as Maryland and Northern Virginia in the Washington D.C. metropolitan area. There is also a separate and distinct Lyme disease risk region in the upper Midwest. It includes more of Wisconsin, a large area in northern Minnesota, and a sliver of northern Illinois. The three sites marked with red crosses indicate the only three sites where high numbers of infected ticks were collected but the statistical model did not accurately predict them as high risk..

Collected data from the study also indicate an absence of host-seeking I. scapularis infected with B. burgdorferi in the South. Although this species is present in this region, observations have revealed an altered feeding behavior adapted to lizards and skinks, rather than deer species, and do not represent Lyme disease carriers.

“There has been a lot of discussion of whether Lyme disease exists outside of the Northeast and the Upper Midwest, but our sampling of tick populations at hundreds of sites suggests that any diagnosis of Lyme disease in most of the South should be put in serious doubt, unless it involves someone who has traveled to an area where the disease is common,” Diuk-Wasser said. “We can't completely rule out the existence of Lyme disease in the South, but it appears highly unlikely.”