Many HPV infections may clear quickly without treatment

Physicians need to counsel patients about how common HPV actually is.

More than 90% of the most common types of human papillomaviruses clear at 24 months with no treatment, according to a recent study.

“HPV is extraordinarily common and is the most common sexually transmitted disease. Almost every sexually active person gets exposed to at least one, if not several, of the 15 carcinogenic viruses,” said Mark Schiffman, MD, head of the HPV unit at the Hormonal and Reproductive Epidemiology Branch of the Division of Cancer Epidemiology and Genetics at the National Cancer Institute (NCI).

Schiffman was the co-project officer of the group who conducted the study, which appeared in the Journal of Infectious Diseases.

Physicians should counsel patients about the risk of HPV turning to cancer may be lower than typically believed and that the infection usually goes away within six months to a year.

“If you’ve got HIV, you’ve got HIV, but if you’ve got HPV, you’re about to not have HPV,” Schiffman said. “Nine out of 10 times you don’t have it in two years. Maybe your body suppresses it like chickenpox, maybe it is completely gone, but the result is that you are OK.”

The biggest problem in HPV case management is loss of follow up. Ideally, women come back in six months but most doctors know that is not a scenario they can count on.

“What we need is a recognition that it isn’t HPV point prevalence that matters, it’s persistence that is linked to progression to precancer,” Schiffman said. 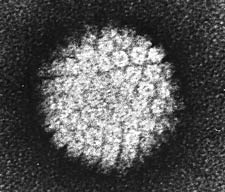 Women from four U.S. clinical centers were followed for two years after they were referred because of ASCUS or LSISL between January 1997 and November 1998. A Markov model was used to simultaneously describe the prevalence, incidence and persistence of type-specific HPV infection over two years. Interactions of multiple HPV types in the same participant were also examined for new infection and persistence of current infection within groups similar in genetic relatedness and carcinogenicity.

“If you look at the curve, what it shows is that if you wait six months, you’ve gotten rid of half your worry,” Schiffman said.

Researchers concluded that after a year to a year and a half of persistence, an infection would likely continue for another six months, even among younger women who are more likely to fight off infections that are found.

No evidence of interactions were found between multiple HPV types regarding persistence of current HPV infection. Schiffman believes that HPV infections of different types are likely independent of each other once biological and behavioral determinations are controlled. Researchers noted the implications of interaction between HPV types and implications on vaccine efficacy.

HPV infections that remain after two years have a high potential for progression to pre-cancer and cancer.

For many years, people thought smoking was the major cause of cervical cancer. Studies involving nuns provided evidence that sexually inactive women had decreased risk for cervical cancer.

“It’s very hard to disentangle sexual behavior and smoking since they were correlated. I imagine nuns didn’t smoke a whole lot either, so it was hard to know about the confounding possibilities,” Schiffman said.

Smoking is a correlated risk because smoke is excreted in the cervical mucosa. Smokers were found to have a two-fold risk of developing cancer and pre-cancer, but risk was highest only among those who also have an HPV infection. Researchers, led by Harald zur Hausen, MD, in Germany formulated their hypothesis about HPV contributing to cervical cancer by the beginning of the 1980s, and tested the theory on women who smoked heavily but never had HPV infection. As the full group of 15 HPV types linked to cancer was discovered, they were able to conclude that HPV infection is the necessary factor in virtually all cervical cancer in the world. Other risk factors besides smoking that elevate the risk of cancer among HPV-infected women include multiple childbirths, long term oral contraceptive use and possibly chronic inflammation.

The HPV cervical cancer research field has advanced in the past 25 years to a point where a key focus has shifted to the development of products to further reduce cervical cancer in resource-poor areas globally and to be more efficient in developed nations, Schiffman said.

In the United States, cervical cancer screening and related programs cost about $6 billion a year.

Physicians can quell patient fears about HPV and cervical cancer by providing facts about the likelihood of progression.

While waiting for HPV to clear on its own without treatment is optimal, some women do not want to wait because they equate the infection with cancer.

“The many millions of dollars that Merck and other companies have spent have been effective in raising awareness of HPV, but this is not an epidemic. Rather, this has been endemic for many years.” Schiffman said. – by Kirsten H. Ellis