Researchers found high rates of sexually transmitted hepatitis C among HIV-negative men who have sex with men who used pre-exposure prophylaxis, especially among drug users, according to data published in Journal of Hepatology.

“HCV has emerged as a sexually transmitted infection (STI) among HIV-positive men who have sex with men (MSM),” Elske Hoornenborg, MD, from the Public Health Service of Amsterdam, Netherlands, and colleagues wrote. “Increased uptake of pre-exposure prophylaxis (PrEP), which successfully prevents HIV-infection but not HCV-infection, could usher increasing overlap in sexual networks between HIV-negative and HIV-positive MSM, eventually resulting in an expanding HCV epidemic among MSM irrespective of HIV-status.”

Hoornenborg and colleagues enrolled 348 MSM and two transgender women who have sex with men, all of whom were negative for HIV and used either daily or event-driven PrEP. At baseline, 17 participants had HCV antibodies and 15 were HCV RNA positive. 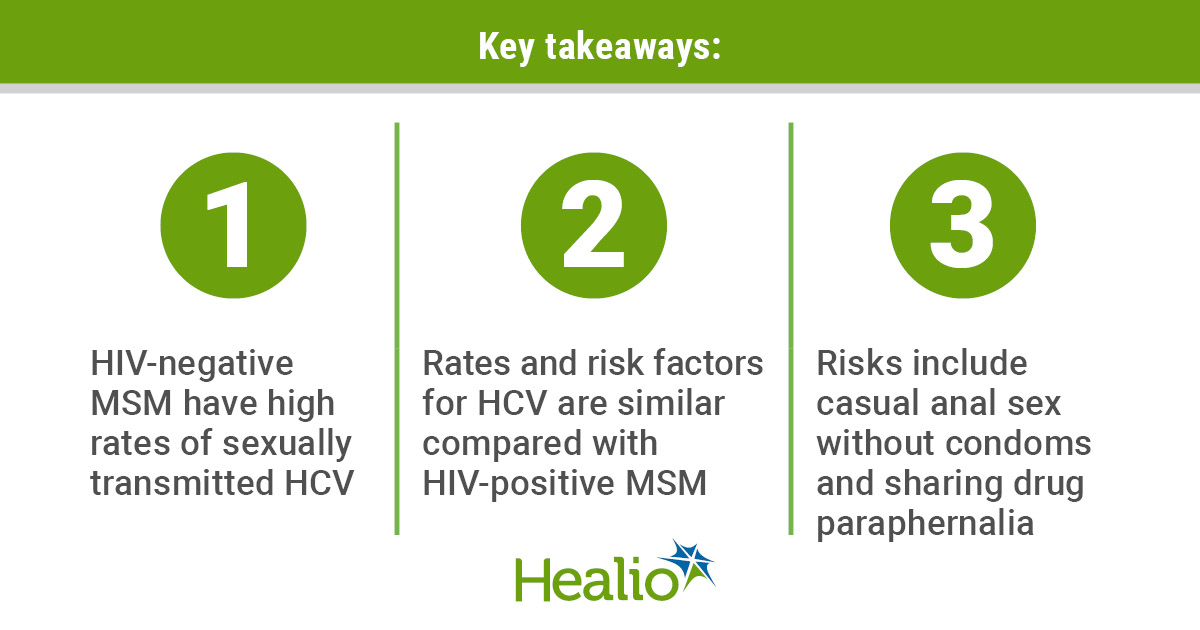 Hoornenborg and colleagues noted that the incidence of HCV infection and reinfection was comparable between MSM on PrEP who are HIV negative and those who are HIV positive. In contrast, HIV-negative MSM not on PrEP had a 19-fold lower incidence rate compared with HIV-positive MSM in a recent meta-analysis.

“These findings imply that there is no overflow of HCV infections observed in HIV-positive MSM and HIV-negative MSM starting or using PrEP to the larger HIV-negative MSM population, at least for the time being,” they wrote.

The researchers noted a possible explanation for the higher rates of HCV in the HIV-negative PrEP-using population: that their sexual networks are more likely to overlap with MSM who are HIV positive, and that the use of PrEP makes preventative strategies such as condom use seem less important.

“Our findings highlight the importance of an integrated sexual health approach, which includes professional education concerning HCV, frequent provider- or client-initiated testing and treatment of those with detectable HCV-RNA,” Hoornenborg and colleagues wrote. “Additional preventive interventions are certainly needed, such as campaigns to inform MSM about the risks of HCV and effective behavioral interventions, particularly for those at risk of (re-)infection.” – by Talitha Bennett