Our Call to Arms: HCV Kills More Than Any Other Infectious Disease

We’ve known for a long time that hepatitis C virus infection is a major cause of death in the United States; in fact, we now have evidence from the CDC that, among infectious diseases, it is the lead killer.

The best way to think about this new announcement is to consider a hypothetical new infection is the leading cause of death and in the hypothetical, there’s no treatment. How would our nation react if there were no treatment available? There would be panic and concern and we would be closing our borders. Think about the reaction to Ebola, which had a small impact on the United States and ‘only’ killed thousands in Africa.

Instead, HCV kills millions and has a very real, curative treatment. Through intense work over 20 years, we have an understanding of the epidemic and knowledge of how to intervene. Further, we have drugs that are not only effective, they’re remarkably effective in eradicating the virus from, and thereby curing, an infected individual. Finally, we have the know-how to find people who are infected, get them into care and cure them. The questions now are: What are the barriers? Why are we not getting those effected into care and curing them? And why are we not doing it with great urgency?

Why don’t we take advantage of a positive opportunity and make some good of it?

We can be guided from our experience with HIV, where a convergence of effort between providers, patients, activists, the pharmaceutical industry and government officials helped convert HIV from a certain death sentence to a chronic, manageable condition. Out of this coalition came the Ryan White Care Act, which assures treatment for every HIV-infected patient in the United States and the concept of the treatment cascade, which has been applied to the HCV patient population. Unlike HIV, HCV can be cured, thereby eliminating the need for life-long engagement in HCV care for all but those with advanced disease and cirrhosis.

If we apply the lessons learned from HIV to the epidemic of hepatitis C infection, we can not only control, we can eliminate it. If we put our minds to it and make it a priority, if we attack it, we can potentially eradicate the virus globally by 2030. We just have to have the will and the resources to do it. And it will require a partnership between all of the folks with interest in the epidemic, just like it did with HIV. It’s that simple and it’s really that hard. 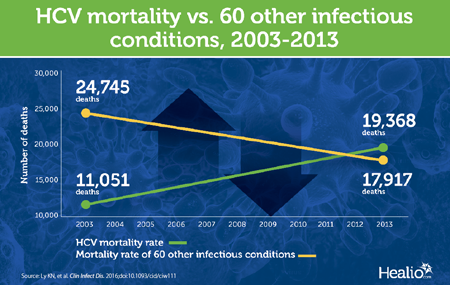 We’ve known about this impending epidemic for so long that it’s seemingly not newsworthy any longer. We are just now hitting that peak of deaths that was predicted years ago to start accelerating in 2016 and go to 2020. The lack of a coordinated, war-like response is frustrating.

We need a call to arms to take action now to eradicate HCV from the planet. We have the tools and we have the ability to do something. To not do this is a crime and tragic. I ask you, my colleagues, to wake up others, organize, and make the push — Now and with great urgency.

University of Alabama at Birmingham