WHO Encourages Safe Injection Use to Prevent HBV, HCV

In honor of the fifth annual World Hepatitis Day on July 28, 2015, the World Health Organization has launched a pilot, global safety injection initiative in various countries to help prevent unsafe injection usage, according to a press release from WHO.

“WHO is alerting people to the risks of contracting hepatitis from unsafe blood, unsafe injections and sharing drug-injection equipment,” according to the release. “Some 11 million people who inject drugs have hepatitis B or C infection. Children born to mothers with hepatitis B or C and sex partners of people with hepatitis are also at risk of becoming infected.”

To prevent the risks for HBV and HCV, the organization emphasizes the need for all health services to use only sterile equipment for injections and other medical procedures, to test all donated blood and blood components for hepatitis B and C and to promote the use of the hepatitis B vaccine. The organization also encourages people to develop safer sex practices, such as minimizing the number of partners and using condoms to protect against transmission, according to the release. 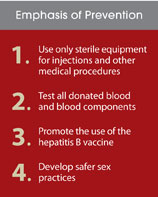 The global campaign, which will begin in Egypt, Uganda and India, is designed to raise public awareness for safe injection use to help prevent HBV and HCV, according to the release. The campaign will officially kick off in Egypt, a country WHO says has one of the world’s highest hepatitis burdens.

“It is estimated that 10% of the population [in Egypt] between 15 and 59 years is chronically infected with hepatitis C,” according to the release.

In addition to safe clinical practice, WHO recommends all children get the HBV vaccine since approximately 780,000 people die each year from the infection. WHO also recommends adults be vaccinated if they are at increased risk of acquiring HBV, according to the release. These include people who frequently require blood or blood products, health care workers, people who inject drugs, household and sexual contacts of people with chronic hepatitis B and people with multiple sexual partners.

“[There is an] urgent need for countries to enhance action to prevent viral hepatitis infection and to ensure that people who have been infected are diagnosed and offered treatment,” the release said.