Lorlatinib active in ALK-positive NSCLC, regardless of EML4-ALK variants

Lorlatinib appeared to be an effective treatment for non-small cell lung cancer with ALK resistance mutations, regardless of EML4-ALK variants, according to results of a study presented at the virtual American Association for Cancer Research Annual Meeting.

Researchers found the presence of an ALK resistance mutation may enrich for certain EML4-ALK variants among previously treated patients with ALK-positive NSCLC.

Tumor genotyping for ALK mutations may identify patients more likely to respond to lorlatinib, according to the researchers.

“Secondary mutations in ALK kinase domain can induce resistance to first- and second-generation ALK TKIs,” Todd M. Bauer, MD, associate director of drug development and principal investigator at Sarah Cannon Research Institute, said during a presentation. “This is why patients ultimately stop responding to other drugs. Lorlatinib does have broad spectrum potency against most known ALK resistance mutations.” 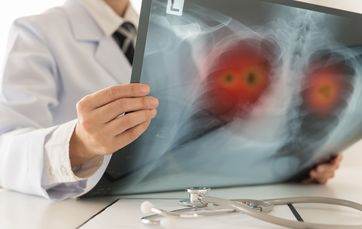 Lorlatinib appeared to be an effective treatment for a NSCLC subset.

Bauer and colleagues sought to further determine molecular correlates of response in an exploratory subgroup analysis of 156 patients with ALK-positive NSCLC who were previously treated with at least one second-generation ALK TKI and enrolled in an ongoing registrational phase 2 study of lorlatinib.

Among 40 patients with ALK resistance mutations based on cell-free DNA, six harbored EML4-ALK variant 1, one had variant 2 and 18 had variant 3.

Twenty-three patients had G1202R deletion mutations. Of those, 15 also had EML4-ALK variant 3.

Median duration of response was 6.9 months for patients with variant 1 or variant 3 and not reached for those with variant 2.

Researchers observed no responses in the patients with other ALK rearrangement types.

“With respect to the primary endpoint of ORR, lorlatinib exhibited antitumor activity irrespective of EML4-ALK variant and across a variety of ALK resistance mutations,” Bauer said. “Confirmation of these results in the tumor tissue is ongoing.” – by John DeRosier

It’s always good to see more data highlighting the importance of tumor genotyping to help us best select targeted therapies for our patients. This is something I have been doing in clinic for a while now, including my patients with ALK fusions. Not only does this allow us to help choose therapy, but also to prognosticate and better inform our patients. The more we are studying these potent, selective TKIs in lung cancer, the more we are appreciating the diverse mutational landscape they can harbor, particularly with regard to resistance mechanisms upon progression. Hopefully these data will encourage practitioners to consider using circulating tumor DNA (ctDNA) analysis as a less invasive option for genotyping in place of, or in combination with, tissue biopsy. We should continue to include evaluation of ctDNA in future studies to continue to build this data set.