Phenotype-guided dosing strategies can increase the proportion of patients with hematologic malignancies who achieve a therapeutic drug concentration of prophylactic voriconazole, according to results of two studies published in Clinical Pharmacology & Therapeutics.

A CYP2C19 genotype-guided dosing strategy for the administration of prophylactic voriconazole increased the number of patients with therapeutic drug concentrations needed to prevent invasive fungal infections, both studies showed. 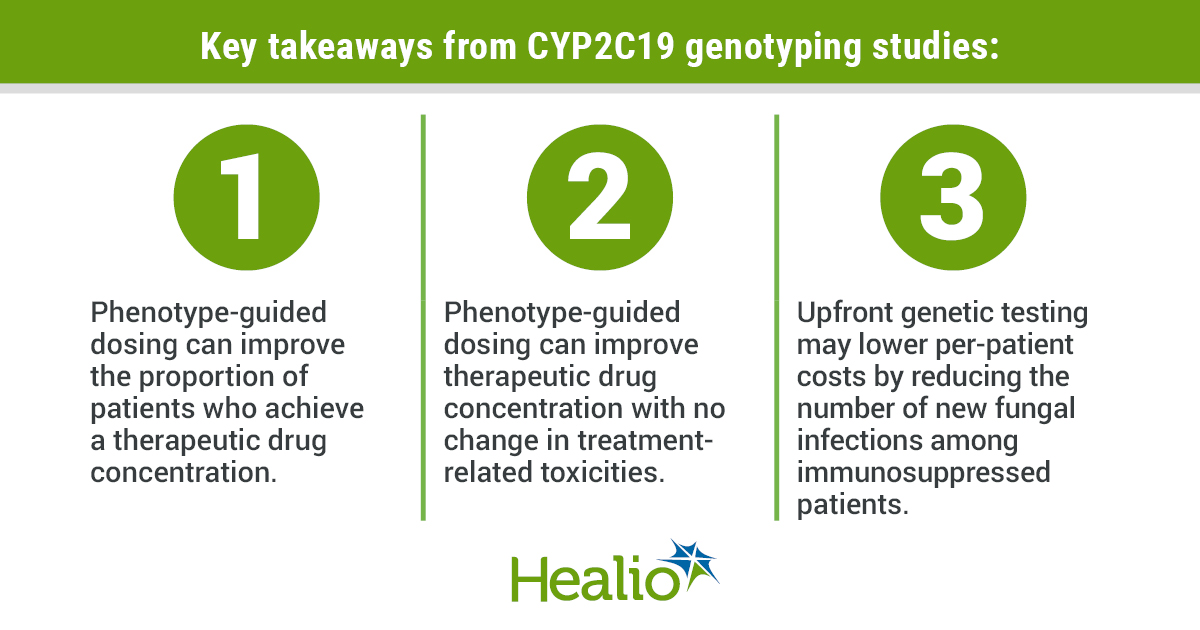 Patients in both studies were neutropenic after undergoing induction therapy with standard chemotherapy, leaving them with suppressed white blood cell counts and at risk for fungal infections. The standard of care for these patients is prophylactic voriconazole to prevent infection.

There already is a known drug exposure-clinical response relationship among these patients, Patel said, and previous data indicated a significant correlation between CYP2C19 genotype and drug exposure.

Hicks and colleagues conducted a single-center prospective study of 263 patients (median age, 64 years; range, 19-86; 53% male) with AML who were genotyped for CYP2C19*2, *3 and *17 alleles to guide dosing of prophylactic voriconazole.

Subtherapeutic concentrations were avoided for 83.8% of CYP2C19 rapid metabolizers who received the interventional dosage compared with 46.2% who received the standard voriconazole dose (P = .02).

Hicks and colleagues noted their study was limited by its underrepresentation of racial and ethnic minorities. Also, the small sample size made the study inadequately powered to determine if CYP2C19 genotyping was cost-effective in its ability to reduce the number of breakthrough fungal infections in this patient population.

Patel and colleagues conducted a prospective observational study to evaluate the impact of CYP2C19 genotype-guided prophylactic voriconazole dosing for adults with hematologic malignancies who underwent HSCT.

Researchers reported a voriconazole success rate of 78% compared with 54% for the historical control group (P < .001), with no patients developing an invasive fungal infection.

Genotype-guided dosing resulted in an estimated per-patient savings of $4,700 compared with simulated controls in a separate cost analysis.

“We didn't have any fungal infections in our study, and the cost associated with that significantly outweighs the cost of implementing genetic testing,” Patel told Healio. “This is speculative because it wasn’t validated prospectively in a randomized clinical trial, but we still wanted to provide at least some estimate of whether we could save some costs.”

Both studies provide evidence that phenotype-guided dosing can increase the proportion of patients who achieve a therapeutic drug concentration and — at least in these patient populations — this can happen with no change in treatment-related toxicities, Patel said.

Although genetic testing upfront may cost more, the savings associated with reducing the number of new fungal infections among immunosuppressed patients could outweigh the cost of the testing.

The Clinical Pharmacogenetics Implementation Consortium (CPIC) curates pharmacogenomics data to provide evidence-based guidelines for how to translate genetic test results into actionable prescribing decisions. The group maintains guidelines for both voriconazole and CYP2C19 genotyping, with much of that data based on retrospective studies, Patel said.

“Their guidelines actually recommend that — for genetically rapid or ultrarapid metabolizers — providers should consider using an alternative antifungal, but there were no prospective data to validate that recommendation,” Patel told Healio. “In our study, we’re showing that we don’t necessarily need to consider an alternative antifungal. If voriconazole is still the drug of choice, we may just need to consider higher doses for those patients.”

The clinical impact of these studies will be greatest for institutions that either are already testing for CYP2C19 or are considering testing, Patel said.

“We now have evidence-based data to show that we can adjust the dose safely and improve drug exposure for these patients,” he said. “As we look 5 years down the road, we’re going to see more institutions doing more large-scale pharmacogenomics testing for many different types of genes, with CYP2C19 being one of the most popular ones.”

Patel said he hopes the data from these studies will lead to a new iteration of CPIC guidelines.

“Adjusting the dose can improve drug exposure without compromising safety and improve clinical response,” he said. “I think these studies will result in greater uptake of dose adjustments based on genotype.” – by Drew Amorosi