Patients with cancer, survivors report high rates of alcohol use

A large study of drinking habits in the oncology population revealed high rates of alcohol consumption among patients with and survivors of cancer.

“Over half of patients who reported a history of cancer diagnosis also reported using alcohol over the past year,” Nina Niu Sanford, MD, assistant professor in the department of radiation oncology and Dedman Family Scholar in Clinical Care at UT Southwestern Medical Center, said in an interview with Healio.

“About 35% report drinking more than a moderate amount of alcohol, and about a fifth reported engaging in what we categorize as binge drinking." she added. "We were overall surprised, although going into the study we didn’t really have any specific expectations on drinking patterns.”

Alcohol consumption is a known risk factor for several types of cancer. According to data in an ASCO statement on alcohol and cancer, alcohol use contributed to 5.5% of all new cancers and 5.8% of cancer deaths globally in 2012.

Sanford said that although the results warrant further exploration, the study, published in Journal of the National Comprehensive Cancer Network, was in no way intended to impose judgment or shame on those diagnosed with cancer. 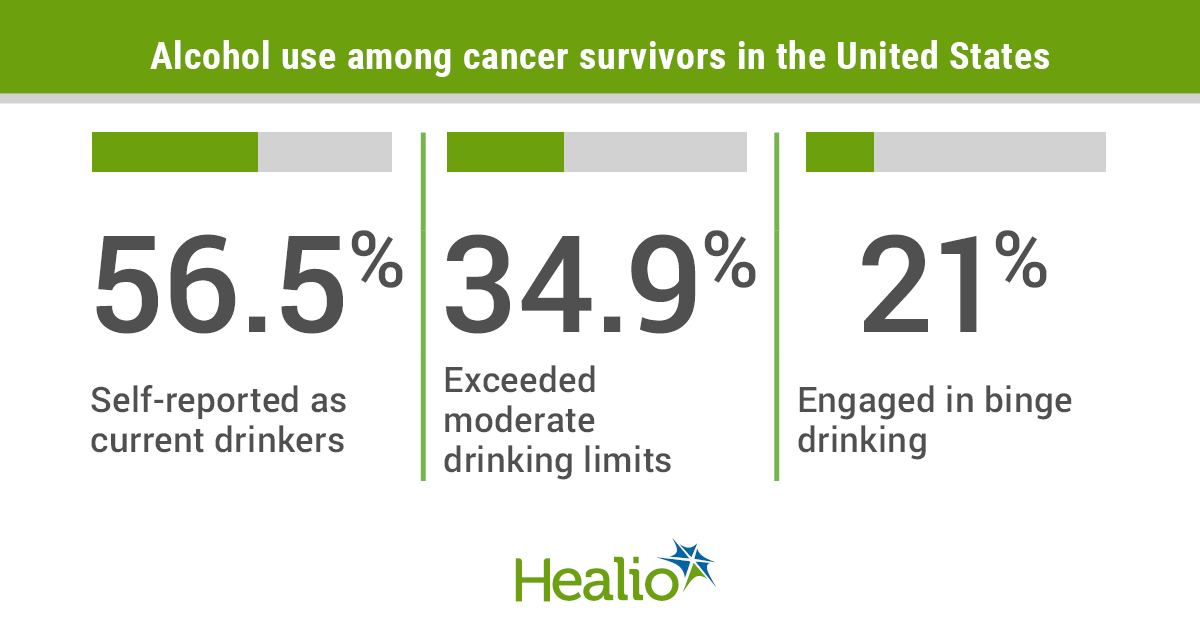 A large study of drinking habits in the oncology population revealed high rates of alcohol consumption among patients with and survivors of cancer.

“It is so difficult to live with a cancer diagnosis, for many different reasons,” she told Healio. “In pursuing this study, we were not looking in any way to cast blame or bring any sort of feelings of shame to patients with cancer or survivors, and we certainly hope our study is not interpreted that way by patients and the medical community.”

For the study, Sanford and colleagues evaluated data collected annually between 2000 and 2017 as part of the National Health Interview Survey, a program of the CDC. The cross-sectional survey monitors the health and related behaviors of community-dwelling adults in the United States.

“To conduct the survey, trained personnel lead personal household interviews with families throughout the country; individuals are chosen to participate in a way that those samples are representative of the population at large,” Sanford told Healio. “The questions range from behavioral and lifestyle to access to medical care and are very detailed.

“The data set is unique in that the actual individual is providing responses, rather than being reported by clinicians,” Sanford added. “I think this can offer a unique and realistic perspective.”

The investigators defined excessive drinking as having more than one drink per day for women and more than two drinks per day for men, in accordance with CDC guidelines. Binge drinking was defined as having five or more drinks in 1 day at any time within the past year.

Overall, 56.5% of the respondents self-reported as current drinkers, including 34.9% who exceeded moderate drinking limits and 21% who engaged in binge drinking.

In addition to the high prevalence of alcohol use overall, the researchers found that younger cancer survivors had significantly higher rates of binge drinking, with 23.6% of those aged 18 to 34 years meeting that criteria compared with 2.6% of individuals aged 75 years and older.

Similarly, rates of drinking at any level appeared higher among survivors of cancers more often associated with younger patients, such as cervical, testicular and head and neck cancers, as well as melanoma. Drinking appeared much less prevalent among breast cancer survivors.

“Drinking is definitely a modifiable risk factor that is very common,” Donald Abrams, MD, an oncologist specializing in integrative medicine and cancer treatment at University of California, San Francisco’s Osher Center for Integrative Medicine, who was not involved with the study, said in an interview with Healio. “As someone who stopped drinking a few years ago, because I don’t metabolize it very well, I’m amazed to see how mainstream alcohol consumption is in our society.”

‘A semblance of their former life’

Sanford said the study did not assess the reasons for drinking alcohol. She noted, however, that patients with cancer and cancer survivors are often asked to make many sacrifices and adhere to various restrictions. In discussing public reaction to the study with a colleague, she learned of a survivor’s comment to that effect.

“The survivor said, ‘We’ve had to give up so much, and now oncologists are getting angry if we have an occasional glass of wine,’” Sanford said. “That is not at all what we intended to do with our study, but I do understand how our study could be upsetting to some. Cancer survivors are told, by both their providers and in the media too, to do this or not do that — eat this but not too much; exercise, but not too much; take this supplement, etc. It’s both restrictive and confusing. Drinking alcohol may provide a sense of control, a semblance of their former life.”

Abrams, who often provides diet and lifestyle recommendations as part of his practice, said he has had conversations with cancer survivors about their desire to resume drinking alcohol. Those with whom Abrams has worked include ER-positive breast cancer survivors who returned to their jobs and resumed other daily activities.

“After work, these women might want to go for a drink with their colleagues, or have a cocktail at home with their spouse,” Abrams said. “These are women who appreciate the fact that there’s a linear relationship between alcohol consumption and ER-positive, postmenopausal breast cancer.”

As an alternative, these patients have asked Abrams to prescribe them cannabis.

“I would write those recommendations without hesitation,” Abrams told Healio. “In my opinion, cannabis is much safer than alcohol.”

Sanford noted that data on cancer and alcohol use remains inconclusive, adding that few randomized trials or analyses conducted at the highest level of evidence have been conducted to really be able to infer causality with any sort of scientific rigor.

“If anything, our study should make providers aware of the proportion of patients who could be drinking alcohol, and let patients know that this is something we are willing to talk about if they wish to, in an open, empathetic way,” Sanford told Healio. – Jennifer Byrne