Survivors of cancer diagnosed during adolescence or early adulthood appeared at greater risk for mortality and severe chronic health conditions compared with the general population, according to results of a retrospective study published in The Lancet Oncology.

“[Although] previous studies have examined long-term outcomes for people who survive 5 years or more after cancer diagnosis in childhood or adulthood, our study is the first to specifically investigate health consequences for those diagnosed in adolescence and young adulthood,” Eugene Suh, MD, assistant professor of pediatric hematology and oncology at Loyola University Medical Center, said in a press release. “These survivors have the potential to live long, healthy lives but remain at risk for health problems as a consequence of their previous cancer treatments.”

Nearly 70,000 adolescents and young adults aged 15 to 39 years are diagnosed with cancer each year in the United States. Of those, about 80% will survive more than 5 years after diagnosis. 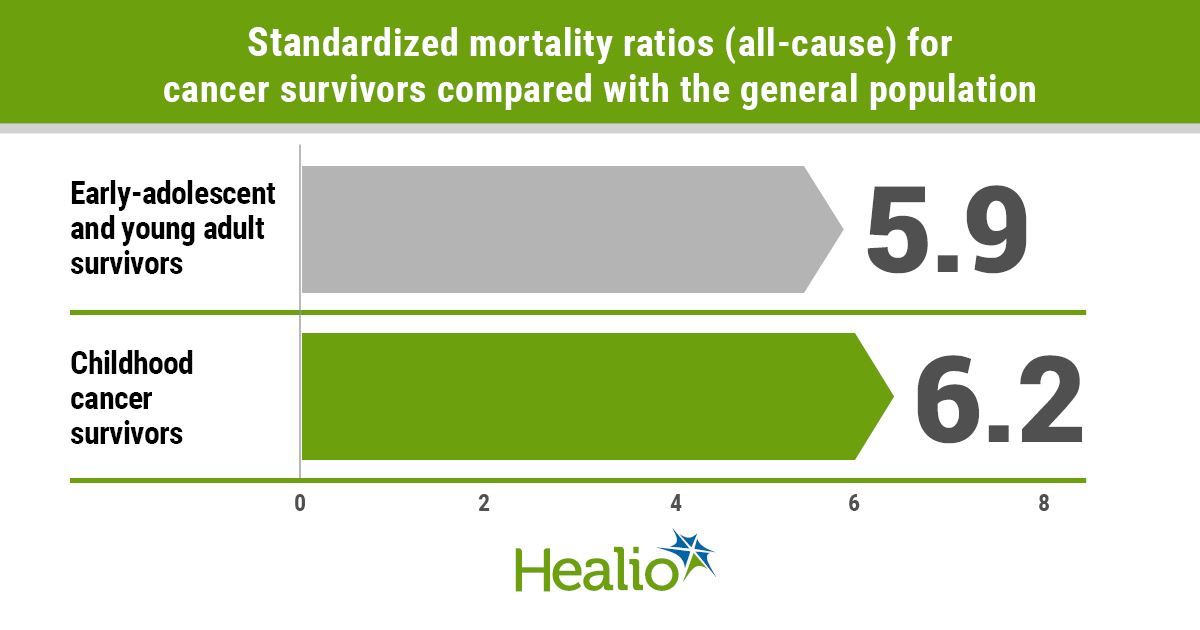 Researchers recruited a third group of similar-aged siblings for comparison.

Median follow-up was 20.6 years for early-adolescent and young adult survivors and 21.1 years for childhood cancer survivors.

Early-adolescent and young adult survivors had lower SMRs for death due to health-related causes, which excludes recurrence or progression of the primary cancer, than survivors of childhood cancer (SMR = 4.8; 95% CI, 4.4-5.1 vs. 6.8; 95% CI, 6.2-7.4). This was most apparent more than 20 years after diagnosis.

However, early-adolescent and young adult cancer survivors had a higher risk for death due to primary cancer recurrence or progression than childhood cancer survivors (HR = 1.6; 95% CI, 1.4-1.9).

A lack of data on the full spectrum of malignancies served as a limitation of this study. Researchers also noted that the findings may not be generalizable to today’s patient population, which is likely to receive different treatment regimens than in past decades.

“Focused efforts are needed to ensure young adult [survivors of cancer] receive long-term health monitoring, with a focus on cancer screening, to reduce their risk for health problems and early death,” Tara Henderson, MD, associate professor of pediatrics and director of the Childhood Cancer Survivors Center at University of Chicago, said in a press release. “Studies have shown that adherence to such programs is poor, so we need to do more to highlight the importance of lifelong care to survivors and their families, as well as primary health care providers. We also need further research to understand how best to deliver risk-based care for survivors that incorporates both cancer specialists and primary care providers in the community.”

These data support the use of focused surveillance for subsequent cancers in both groups of survivors, Päivi Lähteenmäki, MD, PhD, head of the pediatric hematology/oncology unit at Turku University Hospital, wrote in a related editorial.

“However, more prospectively collected objective data focusing on survivors of adolescent and

young adult cancers are needed,” Lähteenmäki wrote. “Accurately characterizing individuals at high risk who would benefit from a tailored screening program is most important. In the future,

identifying underlying genetic or molecular factors that might define patients at higher risk for late sequelae would help planning approaches to survivorship.” – by John DeRosier