Blood test could lead to earlier detection of gastrointestinal cancers

The test, which is based on DNA methylation, also achieved accurate (92%) localization of cancers to specific areas of the gastrointestinal tract.

“The potential of this test is to diagnose cancer earlier, when it is more treatable,” Brian M. Wolpin, MD, MPH, director of the Gastrointestinal Cancer Center and Hale Family Center for Pancreatic Cancer Research at Dana-Farber Cancer Institute, said in a press release. “The ability to do that across cancer types could be quite valuable. Many of the cancer types that this test detects do not currently have screening tests that allow earlier cancer detection before the cancers cause symptoms.” 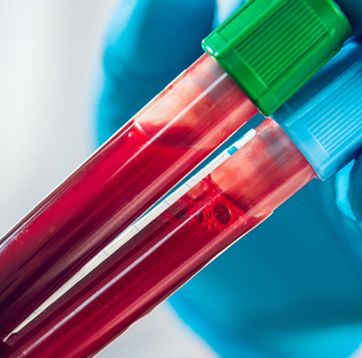 Researchers reported sensitivity for the blood-based assay of 72% for stage I to III disease and 96% for stage IV disease.
Source: Adobe

At a specificity of greater than 99%, the blood-based assay demonstrated overall sensitivity of 82% (95% CI, 77-86) for all gastrointestinal cancer types. Researchers reported sensitivity of 72% for stage I to III disease and 96% for stage IV disease.

Researchers seek to further validate the test’s screening potential in two large population-based studies: STRIVE, which has enrolled almost 100,000 women receiving screening mammograms, and SUMMIT, which will include 50,000 men and women with no known cancer diagnosis.

“The data show that evaluating methylation of cell-free DNA within a blood sample may detect a variety of gastrointestinal cancers with good sensitivity and with a low rate of false positives. If further validated with additional testing, this approach has the potential to allow us to diagnose gastrointestinal cancers earlier, when they are more treatable,” Wolpin said in the release. – by Jennifer Southall

Assessment of circulating tumor DNA (ctDNA) is emerging as a powerful new technology in cancer management. The most immediate application in gastrointestinal oncology is assessment of minimal residual disease below the threshold of what can be detected with conventional radiographic imaging or serologic marker testing, after primary cancer management with surgery or chemoradiotherapy.

Ongoing clinical trials are attempting to risk-stratify patients with colorectal cancer after surgical management to potentially identify patients for whom to avoid, escalate or deescalate adjuvant therapies depending on the status of ctDNA. Using ctDNA as a biomarker during active cancer treatment also is under investigation. As with non-small cell lung cancer, this testing has the potential to detect molecular mechanisms of resistance to ongoing therapy, which in gastrointestinal cancers includes the assessment of HER2 amplification or the development of resistance mutations, such as RAS or BRAF. Given the potential added expense of this testing, whether results from such studies will yield actionable information above conventional testing and how such testing will be best integrated more broadly into clinical practice remain to be seen.

Investigators reported the initial phase of the Circulating Cell-free Genome Atlas study, an observational case-control study including patients with active cancers at all stages compared with patients without cancer. Researchers assessed plasma cell-free DNA, focusing on potential ctDNA using a cross-validated targeted methylation sequencing assay. Looking at cases of active gastrointestinal cancers, the investigators reported a sensitivity of the assay to identify cancer of 72% for stage I to stage III disease and 96% for stage IV disease, with tissue of origin identification accuracy ranging from 70% to 98%. These preliminary results are encouraging, but in earlier-stage disease indicate a potentially high rate of false-negative testing. The next step will be to evaluate the test’s screening potential in large population cohorts of women undergoing mammography and men and women with no known cancer diagnosis.

The results of this potential screening tool require further study and validation. They could lead to more directed or earlier screening and assessment, particularly in rarer cancers that have no conventional screening guidelines (esophagogastric and hepatobiliary cancers) or more common cancers for which no effective screening has been identified (pancreatic cancer). The cost-benefit of such testing, the needed frequency of testing and surveillance, the potential to identify actionable early-stage cancers, and the risk for false-positive findings also will need to be established.