First responders who worked at the site of the World Trade Center after the Sept. 11 attacks demonstrated increased overall risk for cancer, with elevated incidence of leukemia reported for the first time, according to study results published in JNCI Cancer Spectrum.

Multivariate analyses showed no correlation between cancer and magnitude or type of exposure.

A previous study of the General Responder Cohort, published in 2013, showed increased incidence of thyroid, prostate and soft tissue cancers, as well as hematologic malignancies, among World Trade Center rescue and recovery workers.

The current study by Shapiro and colleagues included an additional 5 years of follow-up, spanning the cohort’s inception in July 2002 — shortly after cleanup of the site concluded — through 2013. 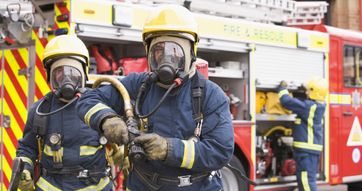 Sept. 11 first responders were shown to have increased risk of several cancer types, including prostate, thyroid, and leukemia.

The most common occupations of responders included construction (20.8%) and protective services (49%). Slightly less than half (44.4%) were exposed to the dust cloud caused by the collapse of the towers.

Researchers calculated standardized incidence ratios of selected cancers using both unrestricted criterion — with cancer counts and person-years of observation starting after Sept. 11 — and restricted criterion, with case inclusion and follow-up starting 6 months after enrollment in the World Trade Center Health Program. This enabled the investigators to account for selection bias.

The age of the responder on Sept. 11 correlated with elevated cancer risk, which increased 1.09-fold with every 1-year increase. Current smokers also appeared at significantly greater risk for cancer than with never-smokers (HR = 1.29; 95% CI, 1.07-1.57).

Multivariate analyses showed no association between cancer incidence and any World Trade Center exposure index for all cancer sites combined nor prostate cancer.

“The main point we were addressing in the discussion was the presence of a dose response — in other words, greater dust exposure meant greater exposure to a range of carcinogens and/or those with the most days on site are assumed to have the greatest exposure to carcinogens,” Shapiro said. “However, these self-reported exposures may not fully capture the complexity of the exposure environment at the World Trade Center site. Future research will focus on better differentiating the various pathways of exposures on site.”– by John DeRosier

Moshe Shapiro, MS, can be reached at moshe.shapiro@mssm.edu.

The results of this study are very important because we don’t have a lot of understanding about exposures and the development of leukemia.

We know that benzyne and a few other chemicals that people rarely get exposed to may increase risk for leukemia, but they don’t seem to be primary drivers in the development of this disease.

Another interesting finding from this study, although it wasn’t surprising, was that being a smoker or being older may create a higher risk for leukemia among responders.

We know to tell our patients to avoid smoking because of its well-documented risks. Beyond, that, however, we are not sure what to tell patients to decrease risk for leukemia.

We look forward to a day where we can have preventive measures — we do a lot of research to try to cure leukemia, but it would be great if we could prevent it from happening.

The data on latency from this study are also important. Usually, we have no idea when the exposure might have occurred, so we don’t know if the disease is from chronic long-term exposure or acute short-term exposure. The long latency and the fact that it probably was not just one incidence of exposure, but rather a multitude of factors, shows why this is such important work.

Questions remain, including whether nonresponders who were in Lower Manhattan are at risk. Other ongoing studies, including the World Trade Center Health Program studies, are looking at this.

An abstract presented at ASH Annual Meeting and Exposition in December evaluated genetic abnormalities that develop in first responders and may lead to myelodysplastic syndrome in leukemia. If this study shows an increase in clonal hematopoiesis among these first responders, researchers can look more broadly at the risk among people who were in Lower Manhattan on Sept. 11.

However, such analysis is tricky because people were exposed to a mixture of chemicals, and we don’t know what kind of protective gear everyone was wearing.