Women diagnosed with breast cancer while eating a low-fat diet had better OS than those who ate a usual diet, according to a secondary analysis of a randomized trial.

This reduction in mortality appeared partly due to increased survival from other health issues.

Researchers of the randomized Women’s Health Initiative study assessed the impact of a low-fat diet on the prevention of breast cancer. During follow-up, researchers observed significantly fewer deaths among women with breast cancer in the dietary intervention group (HR = 0.82; 95% CI, 0.7-0.96).

“However, as prior analyses of mortality were measured from randomization, it is unclear to what extent the results were driven by dietary influence on postdiagnosis survival,” Rowan T. Chlebowski, MD, PhD, research professor at City of Hope National Medical Center, and colleagues wrote. “The observed favorable effects on deaths after breast cancer could have resulted from prediagnosis dietary influences on cancer characteristics.”

Chlebowski and colleagues performed a secondary analysis of the trial — conducted at 40 centers across the U.S. from 1993 through 1998 — which included 48,835 postmenopausal women with no breast cancer history and a dietary fat intake of more than 32%.

Post hoc analyses for OS for breast cancer diagnosed during the intervention, which ran for a median of 8.5 years, served as the main outcome. Analyses occurred after a median of 11.5 years following diagnosis.

A total of 1,764 women were diagnosed with breast cancer during the intervention period. Median age at screening was 62.7 years, and median age at time of diagnosis was 67.6 years.

The researchers acknowledged that the study was limited by a “modest” increase in fruit, vegetable and grain intake, as well as incomplete information on patients’ breast cancer therapies.

“In women who received a diagnosis of breast cancer during the dietary intervention period, those in the dietary group had increased breast cancer OS compared with those in the usual-diet comparison group,” the researchers wrote. “This increase is likely due, in part, to better survival from several causes of death.” – by Andy Polhamus 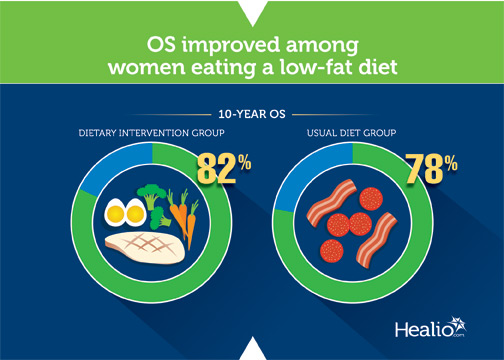