“In general, multigene panel tests yield more clinically useful results and are rapidly becoming the norm,” Allison Kurian, MD, associate professor of medicine and health research and policy at Stanford University School of Medicine, said in a press release. “Newly diagnosed women should ask their doctors whether they may be appropriate candidates for genetic testing. They should also advocate for the opportunity to discuss genetic testing and its implications with an experienced clinician, such as a genetic counselor, in a timely manner.”

The researchers used the SEER registries for Georgia and Los Angeles to perform a population-based retrospective cohort study of 5,026 patients (mean age, 59.9 years) diagnosed with breast cancer between 2013 and 2015.

Researchers linked slightly more than one-fourth of patients (n = 1,316; 26.2%) to genetic test results from any laboratory.

Multiple-gene sequencing also was more often delayed until after surgery (32.5% vs. 19.9%).

Researchers observed no association between multiple-gene testing and an increase in the use of prophylactic mastectomy.

Prophylactic mastectomy occurred most often with pathogenic variants in BRCA1 or BRCA2 (BRCA, 79%; other variant; 37.6%; variant of uncertain significance, 30.2%; negative, 35.3%).

“Our findings demonstrated that sequencing more genes offers the potential advantage of more clinically valuable information and also pinpoints gaps that must be bridged to realize that potential,” Kurian and colleagues wrote.

These gaps included optimal targeting for higher-risk patients, the timeliness of testing, and the closing of ethnic and racial disparities in sequencing “less familiar” genetic variants. – by Andy Polhamus

Disclosures: Kurian reports research funding to Stanford University from Myriad Genetics for an unrelated project. The other authors report no relevant financial disclosures. 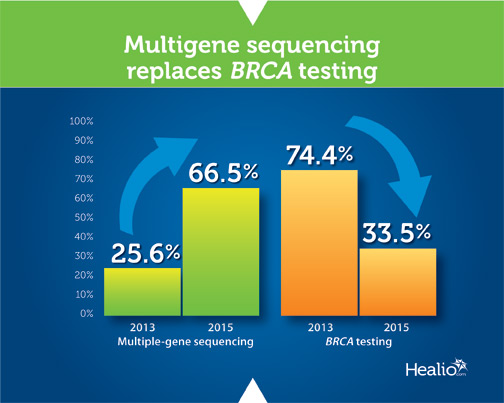 Back to Top
Perspective

Although published description of familial breast cancer appeared in the mid-19th century, it was not until discovery of the BRCA1 and BRCA2 genes in the early 1990s that our ability to implement primary and secondary breast cancer prevention strategies through genetic testing became possible in a truly meaningful context.

An important paper by Kurian and colleagues highlights the tremendous progress in expansion of genetic testing for breast cancer susceptibility, along with data indicating important challenges in realizing further progress.

In this population-based cohort study, Kurian and colleagues found that — among more than 5,000 patients with breast cancer, 26% of whom underwent genetic testing — the ratio of BRCA1/BRCA2-only testing to panel-based testing rose rapidly from 75%/25% in 2013 to 33%/67% in 2015. Notably, this led to an approximately twofold higher detection of clinically relevant pathogenic germline mutations in this breast cancer cohort, substantially improving opportunities for cascade testing of family members and cancer prevention.

Perhaps as expected, the increased ordering of panel-based tests appeared associated with genetic counseling as an element of clinical care, but it was more often delayed until after surgery as compared with orders for BRCA1/BRCA2 testing only. Consequently, the rate of risk-reducing mastectomy did not increase concomitant with the increase in detection of inherited pathogenic gene variants.

An additional important area of concern is that the use of panel-based testing resulted in detection of a higher number of variants of uncertain significance, which is not surprising, but that this phenomenon affected minority patients — blacks and Asians — to a substantially greater extent than white patients. This finding is undoubtedly related to genetic diversity and the greater proportion of white patients who have been tested over the years.

Thus, although these data are encouraging with respect to improved opportunities for primary and secondary breast cancer prevention in the genetically susceptible population, challenges remain with respect to integration of panel-based testing earlier in the treatment plan, and greater access for minority patients to genetic counseling and testing.