A collaborative fundraising initiative has pushed the effort to raise money for and awareness of myeloma to unprecedented heights.

Moving Mountains for Multiple Myeloma (MM4MM) enables patients — along with their physicians and loved ones — to participate in hikes around the world.

Seven treks have taken place since the effort launched in 2016, raising more than $1.6 million for Multiple Myeloma Research Foundation.

In March, MM4MM organized an ascent to the Everest Base Camp in Nepal. Twenty people participated, including seven patients, two doctors and a clinical trial manager. The effort involved 9 days of hiking, sometimes up to 11 hours a day. 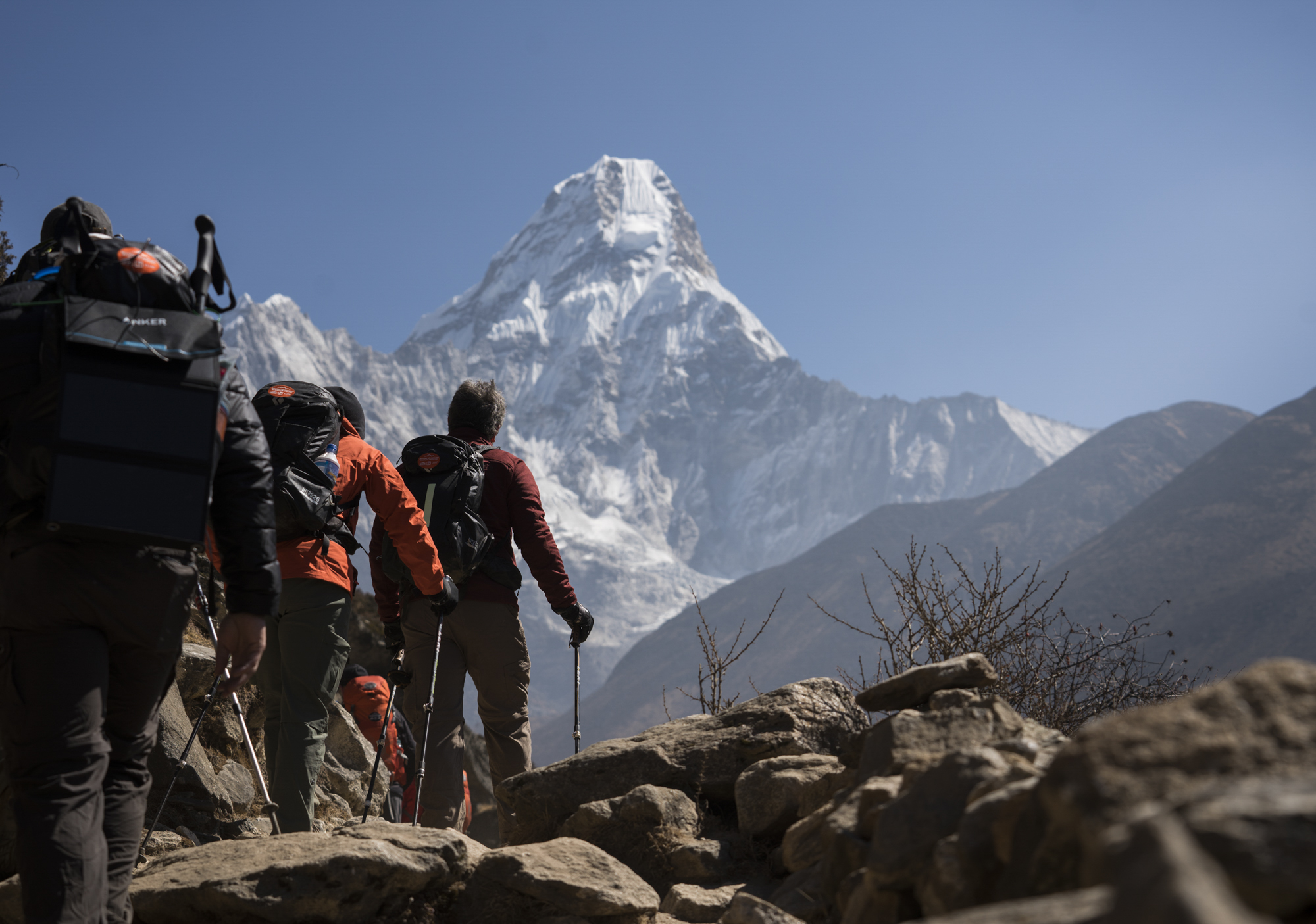 To raise money for the Multiple Myeloma Research Foundation, a group of myeloma patients, loved ones, doctors and industry representatives hiked to the Everest Base Camp in Nepal.
Photo Credit: Ben Canales/John Waller Uncage the Soul Productions.

This summer, MM4MM — a collaboration between CURE Media Group and Multiple Myeloma Research Foundation — will launch Peak Weekends, which will include shorter weekend hikes closer to home.

The 2018 MM4MM Program is sponsored by Amgen and Celgene, allowing all proceeds to go directly to Multiple Myeloma Research Foundation. Takeda served as lead sponsor of previous treks.

Representatives from the pharmaceutical companies also participate in the treks, allowing them to interact with patients benefiting from their work.

HemOnc Today spoke with Alicia O’Neill, director of partnerships and business development at Multiple Myeloma Research Foundation, as well as the two physicians who participated in the Everest Base Camp Trek — Saad Z. Usmani, MD, FACP, and Jeffrey Zonder, MD — about the program and their experiences.

Usmani is chief of plasma cell disorders and director of clinical research in hematologic malignancies at Levine Cancer Institute at Atrium Health, as well as a HemOnc Today Editorial Board Member.

Zonder —professor of oncology at Karmanos Cancer Institute and Wayne State University School of Medicine — along with his wife, Silva Zonder, myeloma program coordinator at Karmanos, participated in the Everest Base Camp trek and the 2016 trek to Machu Picchu.

Question: How did the idea for Moving Mountains for Myeloma come about ?

O’Neill: I head new program development at Multiple Myeloma Research Foundation, with the goal of coming up with inspiring challenges that fuel fundraising for the foundation. One day I got a call from a woman I did not know who was thinking about climbing Mount Kilimanjaro with her friend, Stan Wagner, a patient with myeloma. She wondered if she could do so while raising funds for the foundation. By the time we hung up the phone, not only had I said yes to working to recruit a team for that January 2016 climb, but I had committed to join the team myself. I was intrigued by the idea of summiting Kilimanjaro, the highest freestanding mountain in the world. We filled the team very quickly and easily and did so with people who made up a microcosm of the myeloma community.

Q: How do you choose the locations for your treks?

O’Neill: We aim to select iconic mountains and hikes that people recognize and that they want to do. We are looking for big challenges, but nothing technical. As the program evolved, we wanted to expand to include other continents. So far, we’ve been to North America, South America, Asia and Africa, and we will be in Iceland in August. We want to inspire with these locations and have people who see these patients taking on these challenges say, “Wow! They are able to do that! That is so inspiring.”

We know not everyone can climb to Everest Base Camp, but we want to inspire people with myeloma to accomplish their own version of Kilimanjaro or Everest Base Camp, whether that is travelling across the country to visit grandchildren or walking to their mailbox after transplant. We are demonstrating with these individuals — who are living proof of the progress that is being made — that patients with multiple myeloma are living longer and with a higher quality of life than ever before. We also demonstrate that they don’t do it alone.

Q: What made you decide to participate in the trip?

Usmani: As a myeloma researcher and clinician, I felt obligated to contribute more to the efforts that help raise money for research. As a Pakistani Muslim immigrant, I wanted to set an example for my kids to never stop challenging themselves and set new goals. It’s the only way we grow. To me, the trek also represented the resolve to go the ends of the earth to find a cure for this disease. Having my patient, Kirk Wilkerson, on this trek was truly special. We had trained for a year and motivated each other leading up to the trip.

Zonder: This was the trekking/hiking opportunity of a lifetime, and I knew immediately I wanted to do it with my patient, John Raithel. John has been an avid hiker and outdoorsman throughout his adult life, but his myeloma diagnosis was a big setback. In the last year, he has recovered from some disease-related complications to the point where he was ready to resume this hobby. The Everest Base Camp trek was perfect timing. Silva, John and I trained all year for the hike. 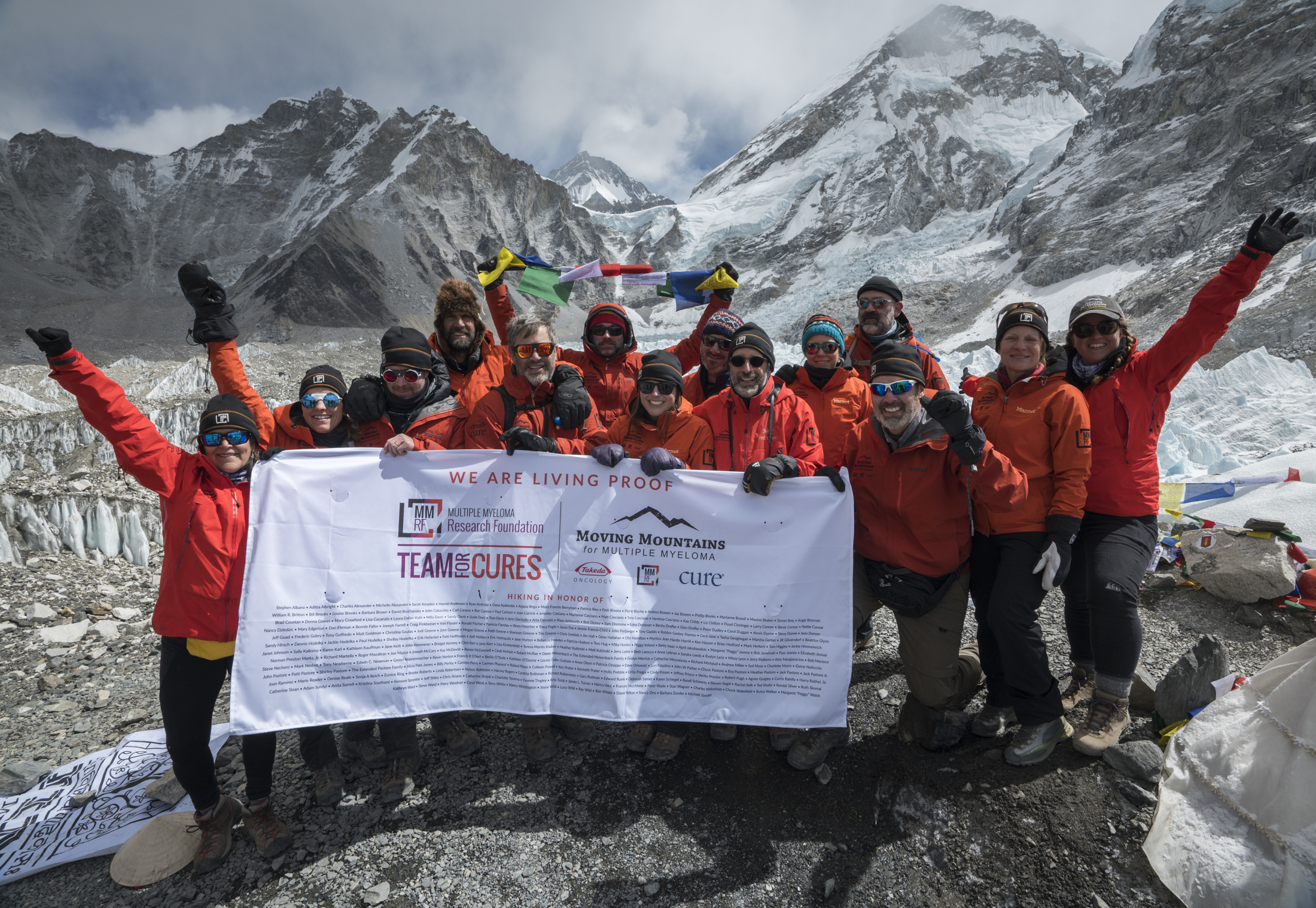 The team hiked to the Everest Base Camp over nine days, with some days including over 11 hours of hiking.
Photo Credit: Ben Canales/John Waller Uncage the Soul Productions.

Q: How did patients benefit from the experience?

O’Neill: Patients want to show themselves — and others — that this disease does not define them. This is a way to demonstrate that, which is very powerful. The patients also love to meet each other and talk with others who understand. They are so overwhelmed with the accomplishment when they get to the top. It is very powerful.

Usmani: This was a very emotionally charged trip for the patients and caregivers. Reaching the Everest Base Camp was a testament to their resolve to conquer multiple myeloma not just for themselves, but for all multiple myeloma patients.

Zonder: For John, my patient, it proved he was not just “back” but really in better health than ever in some respects. I commented at the farewell dinner after the hike that one of the most amazing things to me was that an outside observer wouldn’t have been able to pick out the patients among our group. I heard from more than one of the patients on the trip — as well as several other participants — that the trip helped put into focus the way in which they wanted to spend their time and live their lives going forward.

Q: How would you describe your experience?

Usmani: The trek was rewarding on so many levels. It was perhaps the most difficult physical endeavor the team members had done. The friendships we made along the way, the spiritual lessons we learned and the motivation we got from each other will last our lifetimes.

Zonder: It was absolutely amazing — life-changing. [We had] a fantastic group of people who will certainly be our lifelong friends, including seven really inspiring patients. It was physically one of the most challenging things we’ve ever done.

Q: Would you recommend future treks to your patients or fellow clinicians?

Zonder: Without hesitation, particularly because the MM4MM program has several trips each year that vary in terms of time and difficulty. There is a trip for almost anybody who wants to throw on hiking boots and spend the day walking in the woods or mountains.

Usmani: Definitely, and I look forward to the day where we do not need to raise money for the cure anymore! – by Cassie Homer

To learn more about Moving Mountains for Multiple Myeloma, go to www.movingmountainsformultiplemyeloma.com. Multiple Myeloma Research Foundation also has a similar program for cyclists called Road to Victories. The foundation is recruiting health care professionals and patients to participate in one of three multiday “bucket list” rides. For more information, go to endurance.themmrf.org/R2V.