Study of cancer in dogs may accelerate treatment advances for humans

Comparative oncology — the study of naturally developing cancers in animals as models for human disease — has been practiced for decades.

However, conducting clinical trials on the spontaneous cancers of people’s pet dogs is a relatively new concept. The effort has gained traction with a concerted effort on the part of academic centers and NCI to further develop the dog model.

In a new partnership led by Michael S. Kent, DVM, DACVIM, DACVR, professor and director at Center for Companion Animal Health and co-director of the Comparative Cancer Center at the School of Veterinary Medicine, and Arta M. Monjazeb, MD, PhD, associate professor in the department of radiation oncology at UC Davis and UC Davis Comprehensive Cancer Center, experts are working together to test new cancer treatments in dogs.

The goal is to make discoveries that accelerate the development of new, more effective therapies for humans.

HemOnc Today spoke with Kent and Monjazeb about the insights gleaned from comparative oncology work so far and the key questions that are the focus of their current research efforts.

Question: How long has comparative oncology been used and how extensively is it used in the United States?

Kent: The entire concept of ‘one-health’ and the fact that we are mammals and we share disease processes with animals has gone back for centuries. It has sort of risen and fallen but, in some areas — especially infectious disease — it has been around for quite a long time. The idea of comparative oncology first took hold in the 1970s, when people were researching some of the viruses that can cause cancer and these viruses were found in animals. There has been more research during the past 5 years looking at some of the small molecule inhibitors that suggest the need for more robust models. 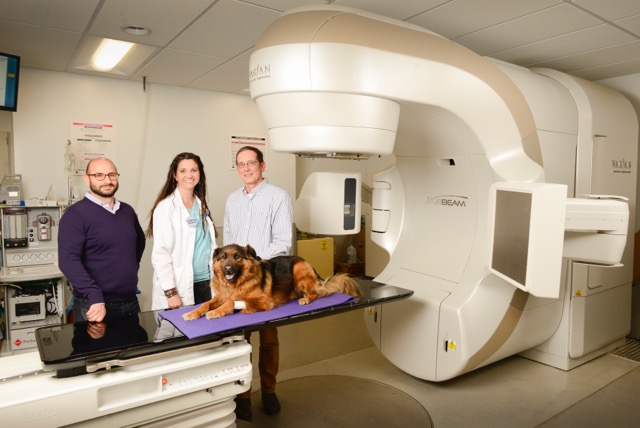 A partnership led by researchers at UC Davis School of Veterinary Medicine and UC Davis Comprehensive Caner Center is designed to evaluate new cancer treatments for dogs in hopes of accelerating the development of more effective therapies for humans.

Q: What important insights have been gleaned from comparative oncology work ?

Monjazeb: Several insights have been gleaned so far. One of them is the utility of the dog model in that it better represents human disease and gives us an opportunity to test novel therapies, both for toxicity and effectiveness, in a way that was impossible without this model. Other insights include the fact that we have learned a lot about the shortcomings of mouse models. Mouse tumors are either implantable or genetically engineered such that they grow rapidly, behave in very characteristic ways that are not necessarily the same as human tumors, and the immune system responds differently to those types of tumors than it does to spontaneous tumors.

Q: What is the potential short-term or long-term impact of the comparative oncology approach?

Monjazeb: Already in the short term, because we have gained data from our dog models, we are moving things into human clinical trials. In the long term, I think this will become more of an essential part of cancer research to ensure that the drugs and combinations that we are giving to humans are safe and effective. This creates a wonderful niche for comparative oncology trials and also benefits the canine patients by giving them access to novel therapies.

Question: How did the idea for this collaborative research effort come about?

Kent: I became involved in comparative oncology more than 10 years ago. I went through the K30 program, a time when there was the innovative idea of bringing veterinarians into the oncology program. The mentored medical research training program is where I started making my first contacts with comparative medical research. The idea of comparative oncology has really expanded beyond us using the typical mouse models and looking at our canine patients and seeing what can be applied more broadly to humans. We have had several collaborations over the years, and they have slowly built up. When Monjazeb joined the research efforts, we received a couple of joint grants and we began working together trying to explore more in the area of immunotherapy. We have other veterinary oncologists and radiation oncologists who are working with our counterparts at the medical school.

Monjazeb: The idea stemmed from a mutual need. On the side of the veterinarians, they were looking for new therapies for their patients for whom they did not have much to offer in certain situations. From our end, we were looking for better ways to conduct cancer research in animal models that would better represent human disease. This is particularly important with regard to immunotherapy, where recapitulating the interaction between the tumor and the host immune system is critical to understanding these therapies. We believe that if something works in a spontaneous dog cancer, it is more likely to work in human cancers.

Q: Are there any specific key questions that are the focus of the research that will be conducted?

Kent: With comparative oncology, we always want to make sure that we choose a cancer histology where the tumors are similar. For example, a lot of the work that we have done in our group is in non-Hodgkin lymphoma, osteosarcoma and melanoma. These are some of the tumor types that have a lot of similarities between dogs and humans. A lot of my personal research has looked at immunotherapy for osteosarcoma and melanoma. Whenever we are working on coming up with a research question, we never want to repeat what has been conducted in mouse models. In the paper we published last year in Clinical Cancer Research, we tried to see if we could do an abscopal effect. I do want to mention that the dogs that we work with have cancer; we do not give the dogs cancer. We also have informed consent from their owners and we conduct our research in an ethical manner, because we primarily want to protect our patients and their family members.

Monjazeb: There are a couple key questions we plan to address. One is to find out how closely dog cancers represent human cancers. The more research we are conducting, we are finding that they represent human cancers very closely. They grow very similarly, they metastasize very similarly, and their histology and genetic landscape is very similar. Their responsiveness to drugs is also very similar, which is quite different from mouse models. Real cancers in dogs occur spontaneously, as do cancers in humans. This is one project that we are working on now. Another question we are looking to answer is whether we can use novel therapies to treat cancers in a way that had not been done before. We have already answered this question in dog models — the answer is yes — and we are now moving this question into human trials. These trials are near launch and we could potentially see the results within the next 3 years.

Q: Can you elaborate on the fact that there appear to be more similarities between cancers in dogs and humans than there are between mice and humans?

Kent: The dog model is a wonderful opportunity. We have co-evolved for more than 10,000 years. They live in our homes and are exposed to the same carcinogens. They develop tumors later in their lifespan and are very similar to humans. A dog’s immune system is much closer to a human’s immune system than a mouse’s immune system. One example of this is that mice do not have TLR8. If we wanted to test this in a mouse, we would have to re-make the mouse to have TLR8, and that is difficult to do. We are not trying to replace these traditional mouse models that have been used for years, but adding the dog model to the research equation is one way to get more information. Another advantage in terms of radiotherapy is that dogs are large and similar in size to us as humans.

Q: Is there anything else that you would like to mention?

Kent: We have a good mutual respect among colleagues and we all realize that we can all bring something to the table and work together.

Monjazeb: One of the most difficult aspects as well as advantages of this type of approach to research is that it does require a multidisciplinary team. It is great that we get to learn from each other, but it also requires a lot of time in order to build those relationships and have those collaborations. – by Jennifer Southall