Firefighters are at increased risk for injuries and chronic diseases, including kidney, ureter and pancreatic cancers, respiratory diseases and heritable genetic effects.

The effect of on-the-job exposure to polycyclic aromatic hydrocarbons (PAHs) from the burning of wood, plastics, furniture, electronics and other building materials released into the air during a fire is not well understood.

These known carcinogenic compounds have the potential to cause DNA mutations that could lead to cancer, according to study background.

Investigators collected urine and skin wipe samples at the start of firefighters’ shifts and after they returned from fire scenes. Researchers used the Salmonella mutagenicity assay to assess exposure to PAHs and other organic mutagens. They also assessed lung injury and oxidative stress.

Results showed levels of PAH metabolites in firefighters’ urine increased by 2.9 to 5.3 times after they returned from fires compared with pre-event levels. The potential for genetic mutations increased 4.3-fold (P < .0001).

PAH concentrations in personal air and on the skin accounted for more than half (54%) of the variation in changes of urinary PAH metabolites (P < .002).

HemOnc Today spoke with Blais about the study, the implications of the findings, and what must be confirmed in subsequent research. 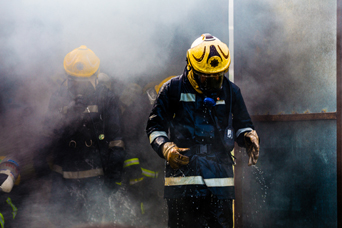 Question: Can you describe the evidence regarding elevated cancer risk among firefighters?

Answer: Epidemiological studies have shown that firefighters experience increased rates of cancer compared with the general population. LeMasters and colleagues conducted a meta-analysis of 32 studies that showed the excess cancer risk among firefighters relative to the general population was 2.02 for testicular cancer, 1.53 for myeloma, 1.51 for non-Hodgkin lymphoma, 1.39 for skin cancer and 1.28 for prostate cancer. A long-term health study by Guidiotti and colleagues included 3,328 firefighters active from 1927 to 1987. Results showed no increased risk for heart disease, but excess risk as defined by the standard mortality ratio was apparent for kidney and ureter cancer (414%), bladder cancer (315%), colon cancer (161%), obstructive pulmonary diseases (157%), pancreatic cancer (155%), lung cancer (142%), myeloma (127%) and all malignant neoplasms (127%). A study by Kang and colleagues showed an association between firefighters and brain and colon cancer. A study by Ouyang and colleagues showed that the length of a firefighter’s service career also may influence health. Overall, these results suggest excess occupational exposure by firefighters to carcinogens and other harmful substances.

Q: How did the idea for your team’s study come about?

A: We were approached by two members of the Ottawa Fire Service to conduct an occupational exposure study to see what firefighters are exposed to during on-shift fire suppression operations.

Q: How did you conduct the study?

A: Between January 2015 and April 2016, we collected urine and skin wipe samples at the start of participants’ shifts, as well as after a fire if they fought one during that shift. We only submitted paired samples for analysis. If there was not a fire during a given shift, we discarded prefire samples. We also measured metabolites of PAHs.

Q: What did you find?

A: After a fire, firefighters had an average of three to five times the number of metabolites of PAHs in their urine compared with before the fire. Some individuals had amounts more than 60 times higher after fires. These are some of the same chemicals in cigarette smoke that have been linked to cancer. The mutagenic potency in urine, which is a measure of the potential to induce genetic mutations, also increased on average more than four times after a fire. Again, some individuals had more than 60 times’ higher mutagenic potency in their urine after a fire compared with before. Additionally, we observed a close link between PAH metabolites found in urine and PAHs on skin, suggesting that firefighters are exposed to these harmful chemicals mainly through contact with their skin rather than inhalation. We also looked for evidence of lung damage and oxidative stress using biomarkers CC16 and isoprostane (8-iso-PGF2), respectively; however, these showed no change before or after fires.

Q: What are the clinical implications of the findings?

Q: What still needs to be addressed in subsequent research?

A: We are now looking to optimize ways to decontaminate firefighters after a fire to reduce their exposures to combustion emissions. Given the asserted importance of dermal exposure in determining the internal dose of PAHs, investigations regarding the ability of postevent skin decontamination to reduce exposure should be prioritized. It seems reasonable to hypothesize that adequate postevent skin and personal protective clothing and equipment decontamination will effectively reduce combustion emission exposures and the associated health risks. – by Jennifer Southall