“Most studies on the impact of socioeconomic status on acute myeloid leukemia outcome have focused on insurance and race,” Lene Sofie Granfeldt Østgård, MD, PhD, of Aarhus University Hospital, and colleagues wrote. “These observations may not be generalizable to patients treated in the several countries worldwide offering universal health coverage.”

Østgård and colleagues performed a population-based study of all patients in Denmark who had acute myeloid leukemia between 2000 and 2014 (n = 2,992). The researchers used logistic regression to compare intensity of treatment, allogeneic transplantation rates and response rates by income level and education. They used Cox regression analysis to compare survival after adjustment for sex, age, clinical prognostic markers and socioeconomic status.

Patients with high levels of education comprised the only group to show survival improvements. In these patients, 5-year survival rose throughout the study period, from 39% between 2000 and 2004 to 58% between 2010 and 2014, which widened the survival gap between highly educated patients and those with limited education.

In patients aged older than 60 years, those with lower levels of education received less intensive therapy than those with higher education (30% vs. 48%; adjusted OR = 0.65; 95% CI, 0.44-0.98). Intensive treatment did not appear to affect survival or remission rates.

Disclosures: Østgård reports consulting or advisory roles with Abbvie, Bristol-Myers Squibb, MSD and Pfizer, as well as travel, accommodations and expenses from Pfizer. Please see the full study for a list of all other authors’ relevant financial disclosures. 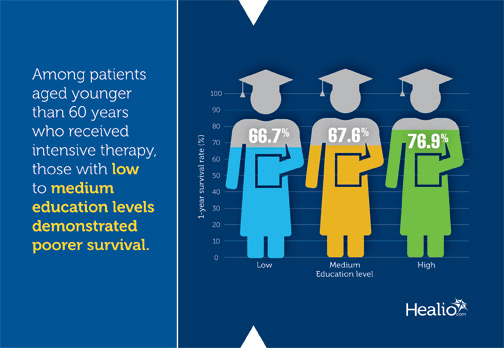 Ostgard and colleagues effectively removed health care costs as a variable of outcomes in AML by nicely utilizing the Danish registries. Interestingly, education level — but not income — accounted for differences in the survival of patients with AML aged less than 60 years in this tax-supported health care system after controlling for other factors, such as socioeconomic status.

The better survival of these more highly educated patients appeared to be due to their higher rate of allogeneic hematopoietic stem cell transplantation in first complete remission (CR1). This difference in survival persisted at 5 years and seemed to widen over time, presumably with advances in allogeneic HSCT.

It is unclear from these data whether the disparity in transplantation rates in CR1 based on education was due to physician vs. patient decisions. Clearly, providers may be more comfortable transplanting a more educated patient, given the importance of patient adherence with this complicated therapy. These results suggest that universal health care coverage alone — and even in combination with disability coverage — would not be sufficient to eradicate disparities in AML care. Improved patient support services and better standardization of care evidently are needed just to extend the benefits of existing treatments to all patients, much less take advantage of new advances in therapy.

It is disheartening that 73% of patients with AML died over the 14-year span of this study. Further, no survival benefit of education or income was evident in patients aged 60 years or older, even though those with more education were more likely to receive intensive therapy and those with higher income were more likely to be enrolled in clinical trials. This likely reflects the fact that intensive therapy and even clinical trials were simply ineffective for these older patients, who also were probably less likely to receive allogenic HSCT due to their age.

The superior survival seen with more aggressive use of allogeneic HSCT for the younger, more highly educated patients argues for more routine use of allogeneic transplantation in CR1. Ultimately, better therapies — not just better utilization of existing therapies — are desperately needed for patients with AML, particularly older patients who comprise a disproportionate share of those with this disease. The approval of several new therapies for AML and numerous promising agents in the pipeline give hope for better outcomes for all patients with AML.