More than one-third of women aged 20 to 44 years who underwent surgery for invasive unilateral breast cancer elected to remove the unaffected breast for preventive reasons, according to a retrospective study published in JAMA Surgery.

The proportion of those women varied greatly by state, with Virginia showing an increase in use of contralateral prophylactic mastectomy from 9.8% between 2004 and 2006 to 32.2% between 2010 and 2012.

“Nobody knows exactly why, but Angelina Jolie choosing to remove her breasts [in 2013] drew a lot of media coverage and there was a slight uptick after that,” Ahmedin Jemal, DVM, PhD, vice president of surveillance and health services research at the American Cancer Society, told HemOnc Today.

Still, researchers had observed an increase in contralateral prophylactic mastectomy prior to Jolie’s decision, Jemal said.

“One reason may be that women have anxiety about developing a secondary cancer in the unaffected breast, and they make a decision without fully understanding the benefits and risks of having this procedure,” he said. “They may not take the time to assess all the options they have.”

Jolie, aged 37 years at the time of her double mastectomy, learned she carried a mutation of the BRCA1 gene and had an 87% chance of developing breast cancer because of a family history of cancer.

Women with invasive unilateral breast cancer without a BRCA mutation have a 2% to 4% chance of developing a secondary cancer in the unaffected breast over the span of 10 years, Jemal said.

“In other words, between 94% and 98% of women diagnosed with unilateral breast cancer will not develop breast cancer in the breast which was not affected by cancer previously,” he said. “The problem is, I don’t think women are informed of this or have taken time to process this information.”

Despite lack of evidence for survival benefit, several studies in the United States have reported an increase in the use of contralateral prophylactic mastectomy — also called bilateral mastectomy — particularly for women aged younger than 45 years. However, it was unclear how this trend varied by state or whether it correlated with changes in proportions of reconstructive surgery.

Jemal and colleagues used the North American Association of Central Cancer Registries to identify a cohort of more than 1.2 million women aged 20 years or older diagnosed with invasive unilateral early-stage breast cancer and treated with surgery between 2004 and 2012 in 45 states and the District of Columbia.

Ethnicity and size of tumor appeared linked to use of contralateral prophylactic mastectomy. Among white women, 9.3% elected to undergo the procedure compared with 5.7% of black women and 7.2% of Hispanic women. Women with tumors 5 cm or larger appeared more likely to undergo bilateral mastectomy than those with tumors smaller than 2 cm (14% vs. 7.2%).

All states, except Wyoming. showed an increase from 2004-2006 to 2010-2012 in contralateral prophylactic mastectomy among women aged 20 to 44 years; although, the magnitude of those increases varied substantially.

In 2010 to 2012, the proportion of contralateral prophylactic mastectomies varied from 15.7% in Hawaii to greater than 42% in the contiguous states of Nebraska, Missouri, Colorado, Iowa and South Dakota.

The proportion of contralateral prophylactic mastectomies among women aged 45 years or older also increased in all states from 2004-2006 to 2010-2012, except for the District of Columbia, which remained stable.

However, the increase in reconstructive surgery did not correlate with the proportion of women who received bilateral mastectomy.

Jemal said he hopes more oncologists review the five recommendations made by the American Society of Breast Surgeons in June 2016. These recommendations include that clinicians of patients with breast cancer should not routinely:

“Patients listen to their doctors, and there are previous studies that show that when recommendations are given by the physicians or surgeons, women are more likely to have contralateral prophylactic mastectomy,” Jemal said. “But, there are also surveys that show almost half of women were not informed about the risks or lack of benefit of contralateral prophylactic mastectomy. Doctors or surgeons have to do a better job of explaining.”

Contralateral prophylactic mastectomies should be a consideration only among patients ineligible for, or unwilling to accept, breast-conserving surgery for unilateral breast cancer, Lisa A. Newman, MD, MPH, director of the breast oncology program at Henry Ford Health System, wrote in an accompanying editorial.

“Several studies have shown that white American identity and affluence are associated with decisions to undergo contralateral prophylactic mastectomy,” Newman wrote. “Interestingly, four of the five Midwestern states with the highest rates of contralateral prophylactic mastectomy have African American populations no larger than 5% and poverty rates below the 14% national rate.”

Newman noted that physicians must respect patient choice and avoid being paternalistic, but also must protect patients from making “impulsive surgical decisions when they are freshly encumbered by the panic accompanying a new diagnosis of breast cancer.” – by Chuck Gormley 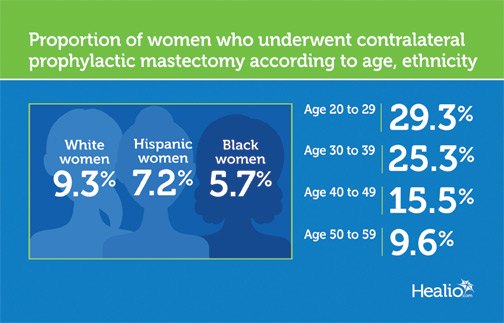