Use of annual lung cancer screenings with low-dose CT remains low among current and former smokers following the 2013 recommendations by the U.S. Preventive Services Task Force, according to a research letter published in JAMA Oncology.

Fewer than 4% of the 6.8 million current and former smokers in the United States underwent lung cancer screenings between 2010 and 2015, results showed.

“The reasons for the low uptake in screening are probably varied, and likely include lack of knowledge among both smokers and doctors as to screening recommendations, as well as access to high-quality screening,” Ahmedin Jemal, DVM, PhD, vice president of surveillance and health services research at the American Cancer Society, said in a press release.

“Our previous study showed implementing quality screening broadly across the United States could prevent about 12,000 lung cancer deaths every year in the short term,” Jemal said. “But we cannot prevent those deaths until and unless we start educating eligible smokers, as well as clinicians, about the benefits and risks of screening, so patients can make an informed decision.”

Lung cancer is the most preventable and leading cause of cancer deaths in the United States, with about 155,870 deaths each year. In December 2013, the U.S. Preventive Services Task Force (USPSTF) recommended annual low-dose CT screenings for asymptomatic individuals aged 55 to 80 years who had a history of smoking 30 packs of cigarettes or more per year and smoke, or have quit smoking within the past 15 years.

The ACS recommends low-dose CT scans for those aged 55 to 74 years who are in fairly good health and have a history of smoking a pack a day for 30 years or two packs a day for 15 years, along with those who are either still smoking or have quit within the last 15 years.

Of those surveyed, 47.1% formerly smoked 30 or more packs per year and had quit less than 15 years prior, and 52.9% were current smokers who smoked 30 or more packs per year. Of those who were current smokers, 31.6% said they had attempted to quit smoking in the previous 12 months, and 68.4% said they had not tried quitting in the previous year.

Furthermore, there was no significant increase in screenings from 2010 to 2015 for any sociodemographic groups, nor were there significant subgroup differences in screening, except between participants with or without a history of bronchitis. Prevalence of screening was significantly lower among those never diagnosed with bronchitis (prevalence ratio = 0.27; 95% CI, 0.09-0.83).

Researchers noted the number of screening-eligible smokers has decreased from 8.4 million in 2010 to 6.8 million in 2015, which reflects progress in tobacco control in the United States.

However, Jemal and colleagues indicated that in a 2015 survey of physicians in South Carolina, 36% correctly stated that low-dose CT screening should be conducted annually in high-risk individuals, and 63% of physicians did not know that Medicare covers low-dose CT for lung cancer screening. Researchers also noted many physicians have limited access to high-volume and high-quality radiology centers, which is a recommendation set forth by public health organizations and a stipulation on Medicare reimbursement.

“This [study] underscores the need to educate clinicians and smokers about the benefit and risks of lung cancer screening for informed decision making,” Jemal and colleagues wrote. – by Chuck Gormley 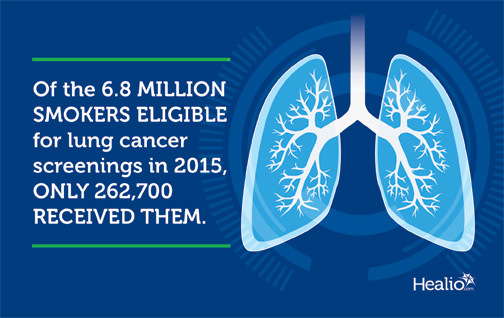