More than half of women with stage I or stage II breast cancer who underwent scalp cooling while receiving chemotherapy retained their hair during treatments with minimal adverse events, according to a pair of studies published in JAMA.

“Scalp cooling is relatively new to the United States market, but Paxman Coolers first launched their device in the United Kingdom in 1997,” Julie Nangia, MD, assistant professor of medicine at Lester and Sue Smith Breast Center of Baylor College of Medicine, told HemOnc Today. “A study from Dignitana was published last year in the United States using similar scalp-cooling technology, although that trial was not randomized, and research continues to be conducted.”

Because rapidly growing cells, such as cancer, and hair follicles are more susceptible to chemotherapy, many women experience hair loss (alopecia) during treatments. Women often rate hair loss as one of the most distressing adverse effects of chemotherapy.

Nangia and colleagues evaluated the Orbis Paxman Hair Loss Prevention System (Paxman) — which is currently not approved by the FDA or reimbursed by health insurance. The cap is connected to a cooling system, placed on a patient prior to chemotherapy, and does not have to be changed or removed until the treatment is completed.

In another study, published simultaneously, Hope S. Rugo, MD, clinical professor of medicine and director of the Breast Oncology Clinical Trials Program at UCSF Helen Diller Family Comprehensive Cancer Center, and colleagues evaluated the DigniCap (Dignitana AB) cooling device, which was cleared by the FDA in 2015.

Wigs or head wraps were used by 63% (95% CI, 53-72) of the patients who received scalp cooling and 100% (95% CI, 92.4-100) of the control group. There were no statistically significant differences in quality of life from baseline to chemotherapy cycle 4 among the scalp-cooling and control groups.

“There were no serious adverse events,” Nangia said. “Overall, patients rated the device as reasonably comfortable.”

Four women withdrew from the study because the cooling device was too cold or uncomfortable, one due to claustrophobia, and one due to anxiety. Sixty additional participants were enrolled in the trial, and the last participant was expected to complete chemotherapy in February 2017.

Patients were fitted with DigniCap and scalp cooling was initiated 30 minutes prior to the chemotherapy cycle, with scalp temperature maintained at 37 degrees throughout chemotherapy and for 90 and 120 minutes afterward.

Researchers considered treatment success a dean scale score of 0 to 2, or 50% or less hair loss. They also evaluated quality of life at baseline, at the start of the last chemotherapy cycle, and 1 month later.

No women in the scalp-cooling group received anthracyclines.

Four women in the scalp-cooling group experienced mild headaches and three discontinued use due to feeling cold.

Although the results of the two studies are promising, scalp-cooling caps will need to be fitted properly to maximize effectiveness and gain FDA approval, Nangia said.

“Additional research will be conducted to determine any long-term adverse events and any increased risk for scalp metastases,” Nangia said. “We would also like to research the efficacy in stage III breast cancer and other solid tumors. Better quality-of-life tools need to be developed to evaluate the full impact of chemotherapy-induced alopecia on the psyche.”

Approximately 50% of women with breast cancer consider hair loss the most traumatic aspect of chemotherapy, and about 8% report they would decline chemotherapy because of its associated alopecia, Dawn L. Hershman, MD, MS, associate professor of medicine at Columbia University Medical Center, wrote in an accompanying editorial.

Currently, the average total cost of scalp cooling is estimated to range between $1,500 and $3,000 per patient, depending on the number of treatment cycles.

The quality-of-life findings in both studies lacked specificity and should be interpreted with caution, Hershman wrote, adding that temporary hair loss can be perceived as cosmetic and, as a result, gaining FDA approval for a scalp-cooling device could prove challenging. 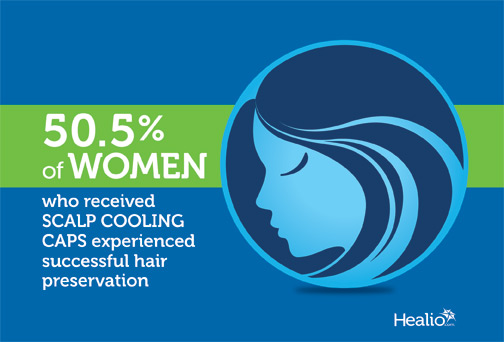