Human papillomavirus is an increasingly important cause of oropharyngeal cancer not only among white men, but also among women and nonwhite individuals, according to a retrospective cohort study published in JAMA Oncology.

“Prevalence estimates of HPV in oropharyngeal squamous cell carcinomas (OPSCC) in the United States have been based on study populations consisting primarily of white men,” Gypsyamber D’Souza, PhD, associate professor in the division of cancer epidemiology at Johns Hopkins Bloomberg School of Public Health, and colleagues wrote. “Prevalence and trends of HPV–related OPSCC among women and nonwhites have not yet been well described. This multi-institutional study demonstrates a pronounced increase in the proportion of OPSCC cases caused by HPV in women and nonwhites over almost 2 decades. These data also address a knowledge gap regarding the role of HPV in nonoropharyngeal HNSCC.”

Researchers examined whether HPV caused a similar proportion of oropharyngeal cancers among women, Asians, Hispanics and blacks as it does among white men. Researchers also evaluated the role of HPV in nonoropharyngeal HNSCC.

Over time, the proportion of nonoropharyngeal HNSCC that were p16 or ISH positive increased among whites (P = .04), but not among nonwhites.

Because researchers oversampled cases occurring in minorities and women for inclusion, they noted that overall and site-specific estimates of HPV prevalence may not be representative of cases at those anatomic sites.

These data address a knowledge gap regarding the role of HPV in nonoropharyngeal HNSCC, D’Souza and colleagues wrote.

“This is one of the first studies to explore the role of HPV in women, nonwhites and non-OPSCC in a large sample size in previously underreported groups with centralized testing and data spanning across two decades,” D’Souza and colleagues wrote.

A delayed increase in HPV–associated oropharyngeal incidence among women and nonwhites could be partly due to changes in behaviors and exposures that occurred earlier among white men than among nonwhites and women, Kristina R. Dahlstrom, PhD, and Erich M. Sturgis, MD, MPH, of the department of head and neck surgery at the University of Texas MD Anderson Cancer Center, and Karen S. Anderson, MD, of the Center for Personalized Diagnostics at Arizona State University, wrote in an accompanying editorial.

“Finally, p16 expression is once again demonstrated to be an acceptable surrogate marker for HPV tumor status and prognosis for oropharyngeal carcinoma, but it cannot be used in isolation for cancers outside of the oropharynx,” they added. “As the incident of HPV–associated oropharyngeal carcinoma continues to increase, it is critical to distinguish between tumors that are HPV driven and those in which HPV has no impact; robust tumor testing, as well as serologic testing, will be vital to this goal.” – by Chuck Gormley 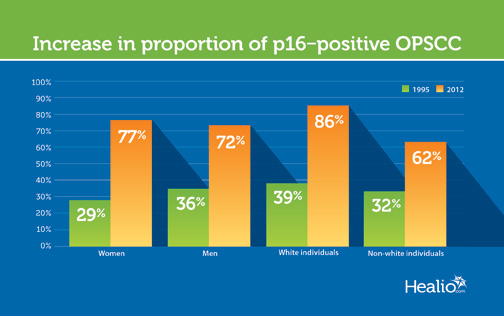 There has recently been a dramatic increase in the incidence of oropharyngeal cancer caused by HPV, particularly in white men. In this study, Gypsyamber D’Souza, PhD, Carole Fakhry, MD, MPH, and their coauthors asked whether there has also been an increase in the incidence of this cancer in other groups, such as women and nonwhite individuals. Researchers also asked whether there has been an increase in cancer caused by HPV in other anatomic areas of the upper aerodigestive tract, such as the oral cavity and larynx. Finally, they asked what is the best method of identifying cancers caused by HPV, because there are different methods one could use.

The same pattern was observed when a different test for HPV was used — in situ hybridization testing for HPV.

The researchers also examined trends over time. They found that from 1995 through 2012, the prevalence of HPV–associated cancer increased dramatically in all groups tested, including black individuals, regardless of the testing method used. Over time, HPV has become a far more common cause of oropharyngeal cancer and, in most groups, is the most common cause of this cancer.

Some cancers in anatomic sites adjacent to the oropharynx, such as the larynx and nasopharynx, also tested positive for HPV. However, overall, cancers from these anatomic regions were far less likely to test positive using all testing methods and, particularly, to test positive using p16 staining, the test used most commonly to detect a cancer caused by HPV.

Overall, the role of HPV in cancers from anatomic sites other than the oropharynx needs further study.

The study is important because it shows that cancers in the oropharynx among women, Asian individuals and Hispanic individualss are as likely to be caused by HPV as those diagnosed in men. The proportion of oropharynx cancers caused by HPV has been increasing over time in all groups tested.